The Walking Dead – Second Opinion Review: A Dull and Flat Season Finale that Insults the Comic

This is Entertainment Fuse’s second opinion review on The Walking Dead finale, the first one can be found here. Towards the end of this review I’ll compare how the show ends this arc compared to the higher quality source material finishes it, but there are no comic spoilers until then. The Walking Dead is a rollercoaster of a show and I don’t mean that because it’s suspenseful or because it has a lot of twist and turns… the quality is simply inconsistent with several highs and lows. Its season one was short and subpar, the first half of season two with them looking for Sophia was awful, the second half of season two was pretty good, season three started with promise and a quick pace, and besides for a few episodes such as “Clear”, this second half of season three was a letdown.

This entire season was built upon the pending collision between the two sides, which is something we never really saw. Governor and his Scooby Doo henchmen charge into the prison and then hightail it out of there when Rick and crew throw some flashbangs at them. Really? Is that the awesome showdown we’ve all been waiting to see for 16 episodes? If there attack was highly coordinated and took out many of their soldiers then I would understand them running and that would actually be interesting to see. However, we don’t see anyone die in the prison’s counterattack besides the young man Carl kills. Carl has been one of the few consistent things this season and unlike the other main characters; he actually did something in the finale. I get why Herschel would be bothered by the shooting and Carl could have given the kid more of a chance, but he did ask him to put the gun down and instead of doing that he dumbly moved forward and tried to hand it to him. 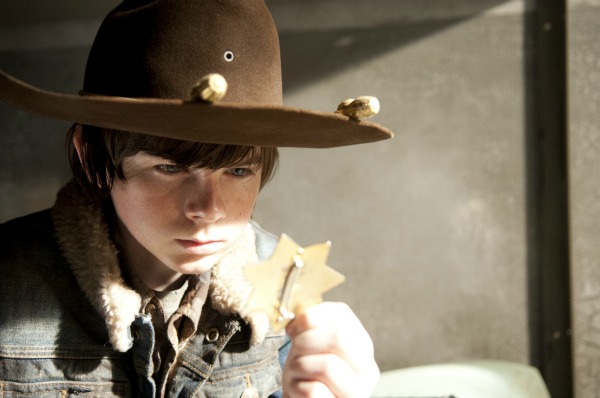 Carl very much had a point when he told his dad that he should’ve acted quicker and that would’ve saved Lori and Merle. Rick can’t fully be blamed for Lori, it did seem like Andrew died from zombies, but Rick not shooting the Governor during their meeting simply boils down to “we can’t do that logical thing because the season would be over”. Rick is the same guy who was fine killing the prisoners because they may have been a threat to them. Well, if they were a possible threat and the Governor is definitely a threat, why not take him out? By that I mean at their initial meeting or Merle’s idea of attacking during the second meeting, which was very doable if he had some backup. So Carl’s criticism rings true and Rick has looked like a bad leader throughout certain parts of this season, which seemed unintentional by the writers.

The other prison main characters were surprisingly inactive and passive during the big finale. Rick hardly said or did anything and the same goes for Daryl who didn’t have bloodlust or any strong emotions after just losing his brother. The finale was mainly about the Governor, Carl, and Andrea. Governor flipping out and easily killing over a dozen people who each had their own gun was silly. So only one person out of everyone has balls enough to defend their lives when fired upon? Once again, it trivializes the entire season. Not only does the mighty Woodbury army run away from flashbangs, but they also allowed one guy to wipe nearly all of them out. Hell, Michonne and Merle should’ve just gone to Woodbury and slapped them all to death weeks ago. It feels like the Governor has run his course and it would’ve been great if he was killed or given a permanent exit. Him coming back next season makes this feel even more incomplete. Another season of him going against Rick sounds tiresome. The show building up to a conflict but choosing to go another direction, if that other direction had been interesting and fulfilling, would’ve been fine. FX’s Justified often does that and it’s a very good show because the alternate road they took has a resolution.

Of course, there was Andrea’s scenes in the finale, which happened too frequently and in retrospect, they're silly and badly handled. She spends so much time talking to Milton and doing other things to waste time in this life or death situation I almost assumed she’d make it out alive, since getting killed in a situation that you could’ve gotten out of is pretty embarrassing. To Andrea’s credit, she also remains consistent this season, which in her case is being somewhat dumb. I liked her character last season since she wanted to be a part of the team, learn to shoot, and help defend everyone, even when Lori laughably told her to get back in the kitchen. However, this season she just seems like a fool who was tricked by the Governor and then failed to take action. She had good intentions, but losing her with Michonne added to the group and now Maggie as a fighter, isn’t a big loss. The first half of this season had some great moments and made some shocking moves (Lori dying), but that quick pace and creative writing seemed to nearly disappear in these 2013 episodes and this failure of a finale is a prime example.

Comic Spoilers
For those who don’t follow the comic, the show follows some of the same storylines, but they’re hardly the same when it comes to details, since Daryl and Merle don’t exist in the comic, Dale should still be alive, Lori dies later, Shane is a very minor character, etc. Therefore, the things I am about to say will probably never happen on the show. The Governor in the comic is a far more intimidating villain. During their first meeting with the protagonists, he cuts off Rick’s hand, has Glenn tortured, and Michonne is tortured/raped by him for days. That’s why her revenge, cutting off his hand, eye, and possibly genitals, is much more fulfilling in the comics than her somewhat random vendetta on the show.

The TV version of his character accomplishes very little other than killing Merle and indirectly Andrea, he hardly does any damage to the prison group, he actually does more damage to himself since he loses his town and Michonne still beats him up and kills his daughter, so he comes across as incompetent. This arc concludes in the comic with Tyresse (who’s basically Daryl in the comics as the second in command) being killed by the Governor and the final showdown leading to Lori and Judith being killed too. Now, I didn’t think AMC was ever ballsy enough to murder a baby, and it doesn’t take character deaths to be dramatic, but the finale being so low-key and underwhelming makes it the antithesis and watered down version of its comic counterpart.