By: Steven Armstrong | Movie Reviews | December 28, 2013
After viewing this movie, I talked to my brother about it, who knew the story of Jordan Belfort. During the conversation he said, "some people like to feel the heat; some people like to fly close to the sun." This made me think of the story of Icarus, one of many classic stories about the danger of hubris. Ignoring his father's instructions to not fly too close to the sun or too close to the water, Icarus' wings melted and he plummeted to the water where he drowned. Tragic. 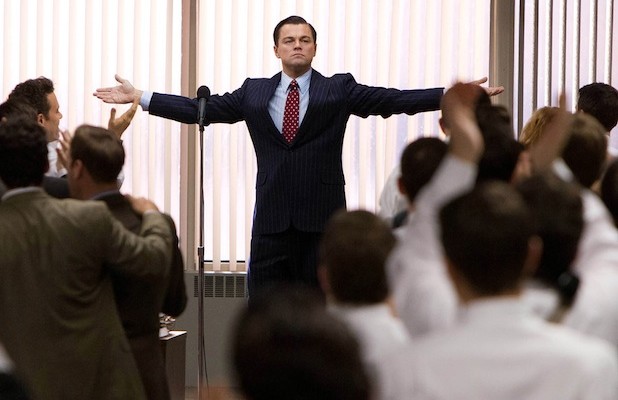 In Martin Scorsese's latest masterpiece, Wall Street shark Jordan Belfort (Leonardo DiCaprio) also ignores advice from his father. Opting to side with pride over prudence. Though the price that DiCaprio's Belfort pays for his arrogance isn't quite as steep as Icarus', he does go on quite a wild ride. One of the takeaways from a film like this is that it is a cautionary tale. In what way you ask? Well, in the ways that all stories about amoral men in power are. You are never so high that you can't fall and be brought back to the reality of the situation. This film is also one about addiction and the pitfalls of it. Many of the problems that Belfort comes across can be traced directly to his addiction to money and the power it brings to him. The addiction to all the drugs, sex and alcohol are secondary to that of the all mighty dollar. As a man with a tremendous appetite, he needs the means in order to satiate  his greed. 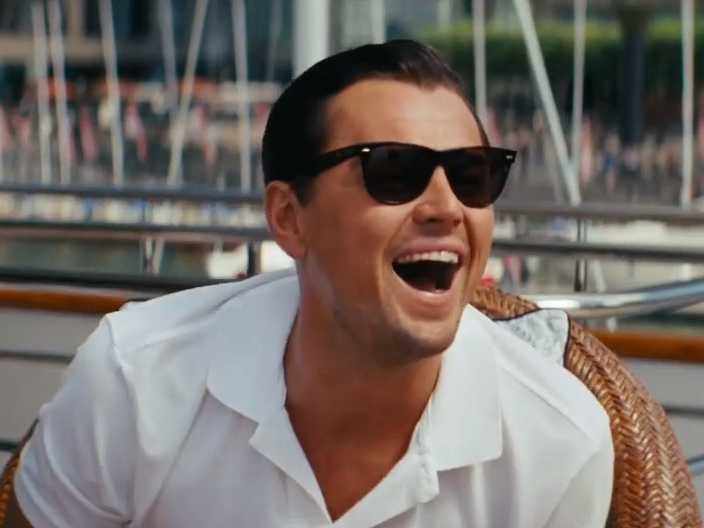 It's true that The Wolf of Wall Street is epically long, clocking in at a minute shy of three hours. Yes, it is disturbing at times. It can also be crude and offensive. These aspects aren't all necessarily negative things because the film, despite its length, doesn't always feel as long as it is. There is so much that transpires that one doesn't really have time to notice boredom if one's attention wanes at certain points. The rawness and offensiveness of the film, while difficult to stomach, is true to the nature of the world that the characters inhabit. One gets a real sense of what it's like to live Belfort's life in the lap of luxury surrounded by money, fast cars and fast women. One also gets a sense, albeit to a lesser degree, of the collateral damage resulting from such a life. One of the more refreshing things about this film though, is that it is also funny. Very funny at times, which isn't really what one expects from a Scorsese flick. Not only does DiCaprio show, in one of the most out-there and lively performances of his career, that he can do comedy just as well as he can more dramatic stuff, but some of the situations in the film are also staged to great comedic effect. There are a few dialogue scenes in particular that are long and are infused with some nice touches of humor. Well known funnyman, Jonah Hill was great in his turn as the right hand of Belfort's firm, Donnie Azoff. He and DiCaprio have great chemistry. He brings a wit and schoolboy immature quality that are an oddly nice fit here. I will say though, at times Hill comes dangerously close to going overboard. It was hard at certain points not to see him as an older version of similar characters he has played in other comedy films. The idea of he and DiCaprio sharing the screen at first glance seems way out of left field, and it actually is, but it does work and after a while you don't really think about it.

The Wolf of Wall Street contains a stellar cast, but if I'm going to single anyone else out, it would have to be Matthew McConaughey as Belfort's first mentor on Wall Street, Mark Hanna. It would be criminal to overlook him, really. He isn't in the film for very long, but he eats up every moment and makes his time count. Within the first few moments he's on screen, he's absolutely electric. Margot Robbie also turns in a great performance as Belfort's trophy wife, Naomi LaPaglia. If you didn't know she was Australian, you would think she was born in New York. She is pitch perfect. Jordan Belfort is a man of the flesh and worldly pleasures. He is a man who doesn't seem the least bit apologetic for his crimes. Do we care about a man who isn't very likable? If that man has a shred of humility or half a conscience, we might. That Belfort doesn't seem to possess either of these might make you want to see him pay the piper; you want to see this captain go down with his ship. The bottom line in all of this is the question of whether or not you should see this film. Despite its heavy subject matter and excessive decadence, it is worth seeing where Belfort ends up. I mean, it's Scorsese after all, and he presents us with one heck of a roller-coaster.
Rating
8.0
Pros