Yesterday DC comics released their solicitation for February. On the solicitation it was announced that issue 25 would be the last issue of the Young Justice comic book. In this issue the team makes their last stand with Kylstar and Braniac. Will they be able to defeat them in this epic last issue.

So, with the comic book tie in getting cancelled does this mean Young Justice is going to be cancelled also. Will we see Young Justice have a season three? Maybe DC doesn’t get enough sales for the comics, and this doesn’t effect the show at all. Tell us your thoughts about this cancellation in the comments below. 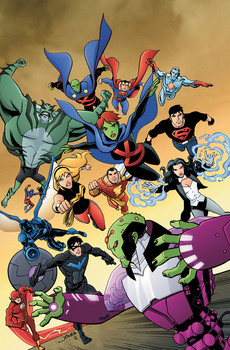