Usually when comics give us Thanksgiving dinners, it happens to be the nice ones. It's the annual Justice League and Justice Society Thanksgiving, which we probably won't be getting again for quite awhile. It's the Fantastic Four. Sometimes, it's the X-Men. Some villain or emergency will come up, but everyone gets it together in time to gather at the table for a nice Thanksgiving.

That ain't all Thanksgiving is.

Thanksgiving is a time to drag families kicking and screaming together when the last thing they should be is around one another. It's the time your hardcore Republican uncle sits across the table from your cousin dressed in all black because he thinks he's 1/16th Native American. It's the time you all try to skirt around the issue of your sister obviously being pregnant though no one knows who or where the father is -- until your old aunt inevitably brings it up and quietly implies she's a slut. It's the first time you've all been together since your brother came out of the closet, and he awkwardly brought your sister-in-law with him because they are still trying to work things out. It's that wonderful time when all a family's dysfunction gets locked into a room together for a meal. 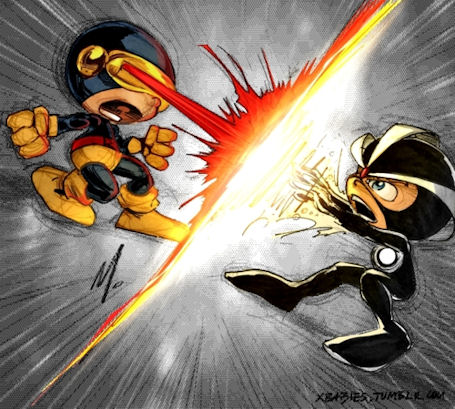 Ah, the Summers family. They have always held a special role in the Marvel Universe for being so nightmarishly complicated, but now, they’re pretty damn dysfunctional too. What a horror story their Thanksgiving dinner would be. At the head of the table, you have Cyclops, carving a big X in the turkey because he’s gone renegade. At the other head of table, you have Havok, looking smug while Jarvis carves his turkey for him. He’s an Avenger now, you know. And he only had to sell out his brother and nephew for the job. That nephew, Cable, has to have Hope Summers cut up his meat for him because she left him with a crippled arm by curing him of his techno-organics. You’re welcome! Then, she has to go sit at the kiddy table, because she looks too much like Jean Grey and is freaking everybody out.

Meanwhile, everyone ignores Rachel Summers gaining 20 pounds on sweet potatoes in self-pity over how she used to be the badass chick in red leather yet has somehow now become the boring one of the family with a school teacher day-job. Worse of all, she can’t say anything about it when all she’d get in return is everyone pointing out how that’s what she gets for taking Wolverine’s side over her family’s in the Schism.

Still, they all unite for the annual tradition of shutting off the lights and ducking out of sight when Adam X shows up drunk, begging to be let in. 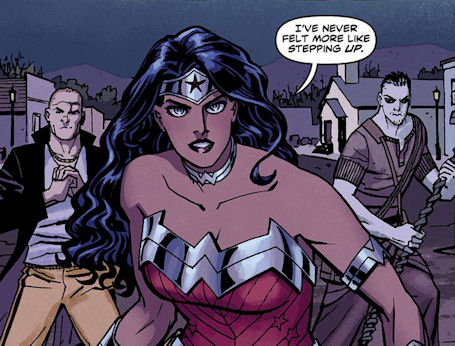 It’s a new experience for Wonder Woman. She has a brand new family to have dinner with. She’s the illegitimate child of Zeus now. She’s a member of what must be the iconic dysfunctional family of all mythology and history. Dionysus brings the wine, and that’s always great. Hermes, with his new character design, is tragically cooked as the turkey.

But that’s just Diana’s new family. Still, you’ve got to leave a place open for Donna Troy. Leave a chair empty and set a plate. She might exist and show up. She might not and... not. No one knows! Seriously, no one knows. Hell, she might be busy calling herself Fury on Earth 2.

There would be plenty of other empty seats left out as well, because who knows how many other bastard children are out there thanks to Zeus for Wonder Woman to call siblings. How do you plan for that?

All dinner there will be awkward tension between Wonder Woman and Hercules until that just blows up and he calls Diana out on stealing his well-treaded character premise. She had her own unique and interesting origin already. Why’d she have to go be the latest character to copy him? Didn’t they just try that with Cassie Sandsmark? And look where she is now. No longer invited to Thanksgiving! 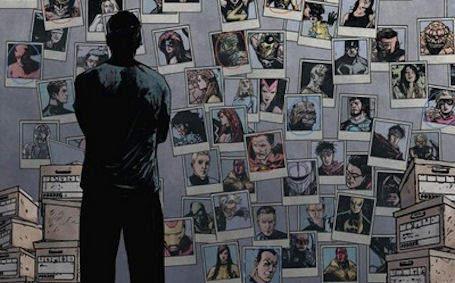 So it’s unlikely the Fury family Thanksgiving is ever going to give you the warm fuzzies. But now, Nick Fury gets to have it with his new son, Samuel L. Jackson from the Avengers. I mean, Marcus Johnson. I mean, Nick Fury Jr. I mean, Marvel Comics’ one man campaign for birth control and/or abortion.

It’s just a series of painfully awkward attempts at small talk between father and son. Each attempt inevitably rolls back to how Junior is trying to supplant Senior’s role in the Marvel Universe. Yes, he wears an eye patch too now. Yes, he’s abandoned the identity he’s lived with his entire live so far to call himself Nick Fury. Yeah, he’s an agent of S.H.I.E.L.D. now. What? No, he’s never heard of identity theft. No, he’s never heard of an old cartoon called James Bond Jr. but it sounds like the awesomest thing ever.

Dinner would obviously be cut short when the real Nick Fury ditches out and realizes how much he misses his old boring son Mikel. 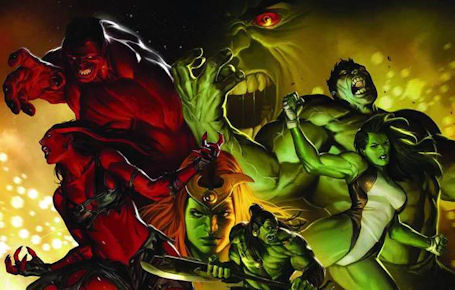 A Hulk family Thanksgiving any year would be golden, but this is a year when that family has really reached critical mass. It can’t be anything but a disaster at this point. Bruce Banner and Thunderbolt Ross can fight over who gets to carve the turkey. Maybe Bruce can ask Ross if he knows how much distance a mile is, because it sure is taking Ross a damn long time to walk that mile in the Hulk’s shoes.

Red She-Hulk could offer to handle the turkey carving with that sword of hers. The one left over from Fear Itself that she insists on carrying around for no real reason. Though the real She-Hulk knows it’s just part of Betty’s overall attempt to seem like the cooler She-Hulk. And they both know it’s working. Betty gets to sit there in her sexy black leather with a badass sword, while Jennifer is stuck showing off her eye-bleedingly unappealing FF uniform.

Skaar gets to sit at the kiddy table, of course. He’d probably be wondering why he got invited at all when his family seems happy to abandon him to places like the Savage Land and the Raft. Next year, he’ll be going to the Luke Cage/Jessica Jones family Thanksgiving in the hopes that they’ll adopt him.

Have a happy Thanksgiving, everyone. I hope yours turn out better than these.