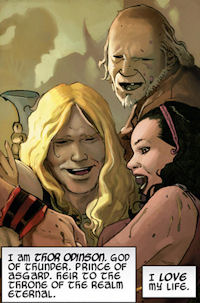 Far as I’m concerned, Thor: God of Thunder is the first big winner of the Marvel NOW! promotion. It’s not that the rest of the first issues thus far have been bad. I’ve yet to read one that hasn’t been good. But none had really blown me away either. None left me with the impression that it was the start of something really new and exciting.

Thor: God of Thunder is the first to pull that trick off.

Back in the early 2000s, Dan Jurgens had his own Thor run going on. It prominently featured Desak, a killer of gods who had rampaged across the universe. It also jumped into the future, giving us an aged Thor who ruled Asgard with one eye and one arm. Jurgens’ run wasn’t stellar. I could happily go the rest of my life without seeing another reference to Thor Girl. But these were two of the really good things about it. From reading the first issue of Thor: God of Thunder, I get the feeling Jason Aaron is on the same wavelength as me in that regard.

Desak, an efficient slayer of gods, was an awesome concept unfortunately mired in other plot elements going on, so he never really got the attention and development he deserved. He was also left in a way that gave future writers little incentive to bring him back. So, what Aaron here is for the best and gives us Gorr the God Butcher. We’re doing the idea of a serial killer of gods over, and it looks like it’s better center stage this time around.

Gorr the God Butcher doesn’t actually appear, which is another good move by Aaron. We’re introduced to him through the corpses he has left behind. Aaron gives us the guy’s track record before giving us the actual guy. Thor discovering a centuries old massacre of an entire alien pantheon does a pretty damn good job of setting the stage for Gorr.

The big hook of Thor’s new book is something kind of experimental that Aaron is doing and doing well so far. We are getting three Thors for the price of one. Not only does the story take place in the present with Thor discovering Gorr’s handiwork on an alien world, we also flash back to what looks to be a pre-Mjolnir Thor’s first encounter with Gorr and forward to King Thor’s final encounter. Honestly, the present day story would have been good enough, but what Aaron is doing with the three time periods really elevates it to a whole other level.

King Thor strongly resembles the King Thor of Jurgen’s run. It’s obviously a very different future, but the similarities are dead on. There are some cool new tweaks to it, though. The Destroyer arm is particularly cool. Young Thor deserves mention too. Aaron obviously has very clear distinctions in his head for how each iteration of Thor behaves, and it shows well.

The Marvel NOW! redesigns of characters is something that has been bothered me. It has less to do with the quality of the designs and more to do with the lack of point behind them. Say what you want about the New 52 redesigns, it at least made perfect sense to redesign characters in the context of a huge continuity revamp. Marvel NOW! isn’t that. Marvel NOW! isn’t really... anything of substance. There is nothing going on in the stories that prompts nearly everyone to change their looks all of a sudden. Did the Phoenix burn off Thor’s sleeves, reminding him he liked the bro look?

Olivier Coipel’s Thor costume is one of the best things to have ever happened to the character. But to be fair, I’ll be happy so long as Marvel never puts a Viking God in a leotard again. There’s nothing actually wrong with look Esad Ribic gives us here. I actually like it just as much, because it’s really not that different from what we had. And really, Thor is a god. He’s not wearing a costume. These are his clothes. It makes more sense for his look to be variable rather than him wearing the same outfit all of the time.

There is one thing I am wondering about. Does this issue imply that Gorr the God Butcher took out the deities worshipped by Native American? We only see that he has killed one, but we later see he is kind of a thorough guy. That would be a shame, but it’s possible Young Thor’s story will expand on this.

Thor: God of Thunder is on a higher level than other Marvel NOW! relaunches so far. They may be using familiar concepts, but Jason Aaron and Esad Ribic do it in a way that makes this first issue really feel like something new and exciting for their lead character. There’s no “getting back to basics” or “business as usual” to this one. This is a match of some great ideas with some unique storytelling spanning three time periods at once. If you have a short list of Marvel NOW! relaunches to check out, Thor: God of Thunder deserves a spot.