Threshold #4 – Review: Not Quite A Bottle Episode

Threshold has been the sad heir to Keith Giffen’s other New 52 series OMAC’s title of being the best sleeper hit that DC Comics is putting out right now. Month to month it has been able to bring out comedy, action, and suspense all in one nicely plotted and drawn story. Not to downplay the importance of the backup, which stars the loveable fan-favorite Lantern Larfleeze – who is set to star in his own solo ongoing series – and take with him the last bankable aspect of Threshold. For it seems that no matter the quality of Threshold it’s been sinking down the sales ladder and is already reaching the bottom 16 of DC’s "New 52" series, also known as those slated first for cancellation. So let’s just treasure the few months that we left before the inevitable cancellation solicit and see what Threshold #4 has in store for readers. 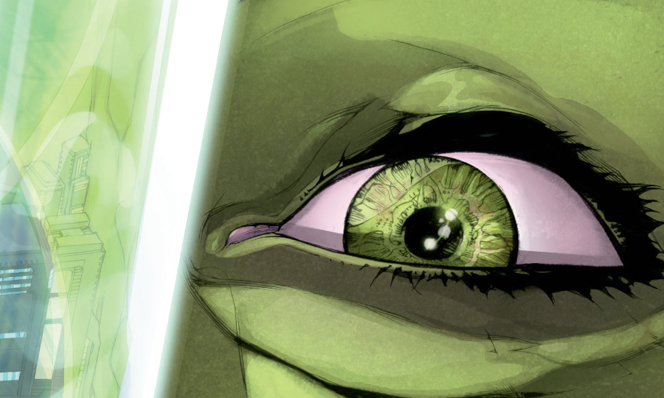 Now the first thing to note is the cover, which is part of DC’s “WTF” Month Initiative – a whole month dedicated to gatefold covers for every title. As with many gimmicks such as these there are those series that do well under the mandate and those who do poorly. Threshold found itself somewhere in the middle – while not outright shocking or enticing it still draws the eye to the story – heroes trapped in one of Brainiac’s Bottle Cities. It’s a nice little story advert that promises a laugh or two. Of course this brings me to my main point of contention against the gatefold covers – they are really simply promotions for future issues if they aren’t blatant spoilers for the issue itself, and this is sadly the case with Threshold #4 – which ends off with the start of the adventure that the cover describes. Not an unusual occurrence in comics, but still an annoyance and especially for those who followed Grant Morrison's run on Action Comics and wanted an explanation for both the cover and the closing pages of this issue.

This is not to discourage the issue, however, not at all. The issue itself does a serviceable job as always with various set-pieces and character beats. Stealth, originally seen as the typical lone-adventurer type, has really grown into her own and an exchange between her and Ember exemplifies that. On the lighter side of events there is also yet another set-piece with the outrageously reinvention Captain K’rot – the New 52 version of Captain Carrot, a silver age mainstay – who is always a delight. While there are those who still decry the way that the reboot has harmed characters in their reinventions of them, but for “Captain K’rot” it’s done in such a wonderfully tongue in cheek way (a Giffen hallmark, just look at such other characters like Rocket Racoon) that it’s a welcome addition to the New 52 universe.

As a whole the issue is simply set up for the main event as the characters and plot points are converging in various ways only to be captured by Brainiac, which is as humorous a set up as this sort fo story gets. Of course this just leads to hopes that the next issue will be the ones to fufill the promises made by the cover. Giffen has been on a roll with Threshold's main story, but not quite at his best stuff - the story that could unravel might very well be his ticket back into a great groove instead of just a good groove. Nothing bad with being decent, but some like the addtion of going big or going home, as it were. This is, obviously, not to leave out the still serviceable art of both Tom Raney and Phil Winslade who contribute solid construction and draftmanship in the issue proper.

As for the Larfleeze back-up story, which we can now see is just build-up for his upcoming solo series, it’s a nice additional treat. This is where Giffen is able to go all-out on humor without having to stop for traditional dramatic or suspenseful tones. Accompanied by the enjoyably cartoonish artistic stylings of Scott Kolins, who will also follow Giffen to the ongoing, it’s one of the few backups that work. Not only does one have Larfleeze, one of Geoff Johns’ breakout characters, but also the amusing side characters The Star Rovers who fit well into the tone that Giffen has set up. With the return of a thought-dead Guardian of the Universe Larfleeze’s time as a backup seems to wrapping up as it reaches a status quo. Threshold as a whole continues to be an entertaining read month to month, and hopefully someone like Didio can pull strings to at least get it a second arc.