By: Justin Moody | Comic Reviews | August 5, 2010
It's 2012 in Berlin, Germany and a team of construction workers have experienced a cave in that has left several of them dead and caused an international incident. The US government is first on site as they try and keep the site contained from the rest of the world. A team enters the hole created by the cave in and discovers a Nazi faculty hidden below the city. Within minutes a team is scrambled together to go through the catacombs of the hidden city.

Once inside they find technology far more advanced than the era had. After entering the main chamber they find a missile with the omega symbol upon it. A countdown begins although no one has touched anything. The officer in charge radios back to base that the missile is about to go off and bids his family good bye.

The omega missile launches into the sky crumbling the structure around the team. The missile continues up into the sky and then falls back down to the earth again. The explosion sends out a virus that begins killing people by eating their flesh. It's ten times faster than the Ebola virus and it's spreading faster than people can think. 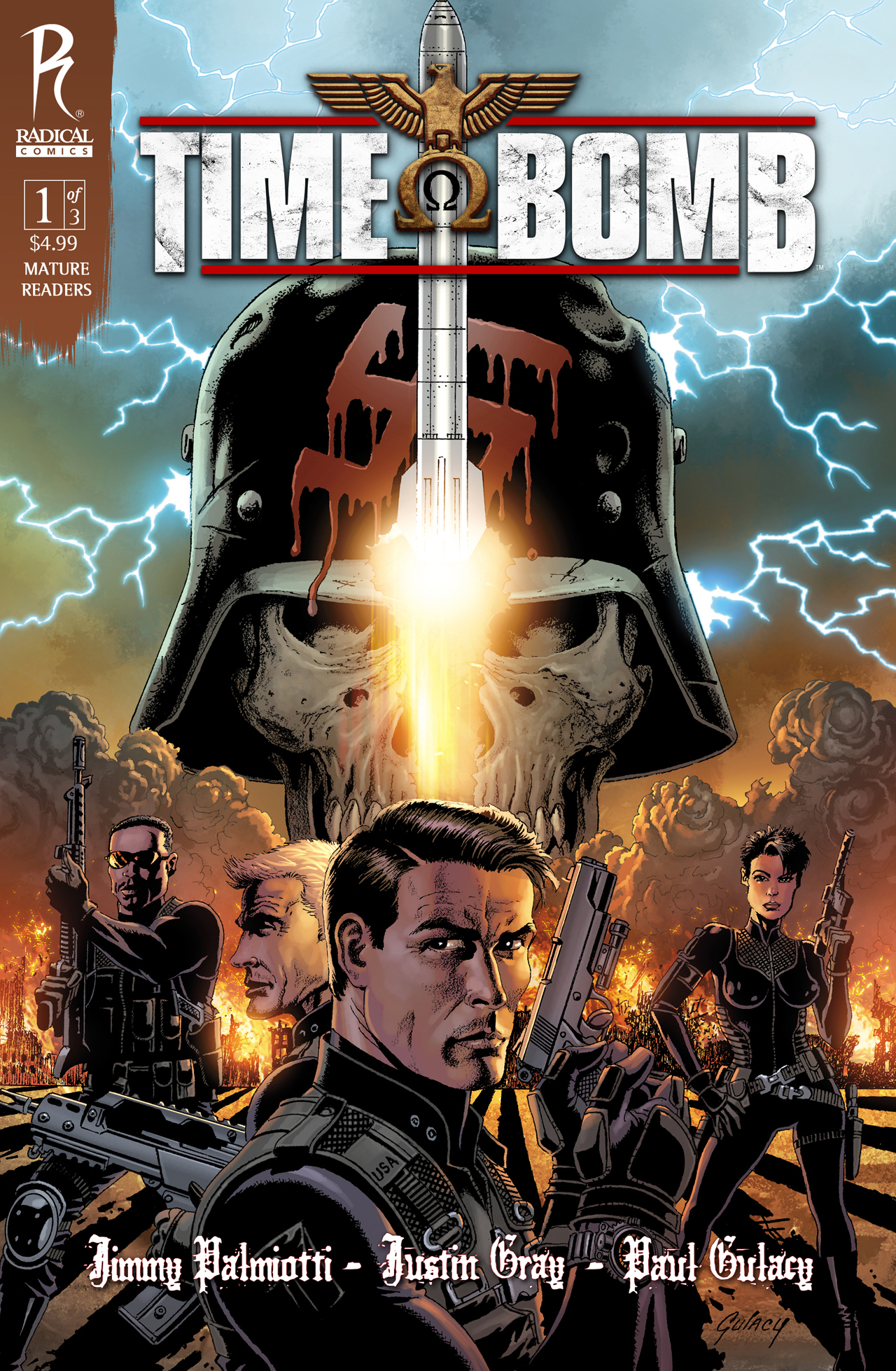 Soon a second team of Americans are formed. Each of them fluent in German and specially trained; they have been picked for operation Time Bomb. Time Bomb is an experiment that sends people back in time and then recalls them to the present 24 hours later. The experiment was originally stopped due to budget and practicality concerns, but with the planet scheduled to die within two days the projects been reactivated.

The team is loaded with all the info they need to warn past officials of the coming events and then armed to the teeth as a safety measure. They load up into the mini bomb and are rocketed into the past. The problem being that the math was never figured out 100%, so the team won't know where or when they are until they get there.

Time Bomb is such a simple idea that is executed to perfection. Just the amount of thought and detail that went into the idea of the time travel device is amazing. Jimmy Palmiotti and Justin Gray are a familiar pairing in the comic industry with hits like 21 Down, Powergirl, Daughters of the Dragon and most notably Jonah Hex. They're one of the best writing teams in comics, but also the most consistent. It's great to see them venture outside of Marvel and DC and play in a world they've created.

The art is very unlike other Radical books. Paul Gulacy is a comic veteran whose work includes: Batman, Catwoman, Cable, Jonah Hex and a whole slew of others. Gulacy's work is top notch and gives the book the proper look and feel that it needs for the story. Not once does it look like a superhero book disguised as a spy book. No it is a military spy book through and through.

If you're new to the world of comics and you're not big on superheroes or "artsy" books then you should definitely check out Time Bomb. It's a self-contained story that has a mixture of fantasy, history and espionage all to craft a new and exciting world. The series is three issues long, but the best part is that each issue is over sized compared to a typical comic book. You may pay a little more but you're definitely getting your money's worth.

Looking for other recommendations? Hit us up in the comments section or as Dustin on Twitter.