Tina Fey and Amy Poehler Back at the Globes?

Deadline is reporting that comedy goddesses Tina Fey and Amy Poehler are being approached for a repeat performance as hosts of the Golden Globes. The pair hosted the awards show earlier this year to an impressive 20 million viewers. Though the prestige of the Globes is slightly questionable, it is one of the most entertaining awards shows of the year, and with Fey and Poehler’s performance history, a second go at co-hosting would surely bring on the funny. The two impressed the crowd and home audiences in this year’s ceremony with their obvious chemistry and comic talents, and we are begging for a repeat. 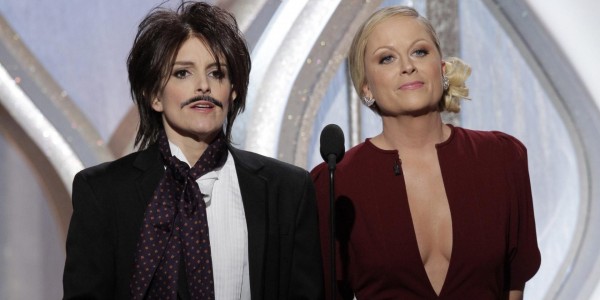 Though there has not been any formal talk between the network, in this case NBC, and the ladies, there have been approaches made by Dick Clark Productions, which produces the Golden Globes. No word on whether the ladies are willing to come back to the gig. While Tina Fey is no longer a series regular on a weekly show, she is being kept busy with a four-year development deal at Universal TV and has already sold two comedy projects. Amy Poehler is still busy with the hilarious Parks and Recreation in which she stars and serves as producer. Fey and Poehler were announced to be the hosts of the 2013 Golden Globes in October, so hopefully, it won’t be longer than that to hear any kind of confirmation for this second time around.