Spinning out of the pages of Brightest Day, Deathstroke leads a team of “Titans” turned assassins that are hired to kill Ryan Choi aka The Atom. The group consists of: Deathstroke, The Tattoo Man, Cheshire, Sun Girl, and the recently resurrected Osiris. The addition of Osiris to the team, makes this line up even more bizarre. Osiris is one of the featured twelve that were resurrected in Blackest Night.

Some Titans fans are upset by the book. Over at DC’s own message board, several fans have already started boycotting the title. The feeling is that the Titans are heroes, never villains. Other fans have pointed out the fact that other than Deathstroke and Osiris briefly, the team has no real tie to the Titans. Seems more like a marketing ploy then an actual Titans tie-in.

The special is solicited to ship May 5, 2010 and is written by Eric Wallace (Titans) and drawn by Fabrizio Fiorentino (Brightest Day, Scion). DC’s The Source, has some great preview pages of Fabrizio’s artwork that look really amazing. Fans may not want the series, but they can’t deny the beauty in those pages. 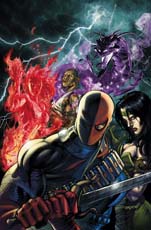