IDW Publishing and Nickelodeon today announced that the first Teenage Mutant Ninja Turtles comic series, featuring the beloved “Heroes in a Half-shell,” will premiere in August 2011. The Teenage Mutant Ninja Turtles will be back in action and ready to fight off evil once again, with an impressive creative team led by TMNT co-creator Kevin Eastman!

Starting in August, IDW’s Teenage Mutant Ninja Turtles will kick off with a brand new installment of the original series, led by Eastman and co-writer Tom Waltz (Silent Hill: Past Life, Infestation: Outbreak). Phenomenal new-comer Dan Duncan will bring the Turtles to life with dynamic interior art, while Sam Kieth and Walter Simonson provide eye-catching covers for issues one and two, respectively. Eastman will also provide layouts for Duncan’s art, as well as variant covers.

This first Teenage Mutant Ninja Turtles series will feature new and exciting storylines that maintain the “turtle power” core beloved by millions of fans. Leonardo, Donatello, Michelangelo, and Raphael reunite to bring their ninja aptitude and teenage attitude in these all-new, action-packed adventures based on the original series. The first story arc will tell the origin story of the Turtles and introduce a new villain, the fearsome mutant alley cat, Old Hob. Featuring a cast of familiar characters, including Master Splinter, April O’Neill, Casey Jones, and true to the spirit of the original comics created by Eastman and Peter Laird, the Teenage Mutant Ninja Turtles are bigger and badder than ever, and ready to rock old and new fans alike.

IDW and Nickelodeon have a long-term partnership to offer an all-new installment of the original Teenage Mutant Ninja Turtles comics and graphic novels. IDW’s new comics are part of a larger initiative to bring Turtles to a new generation of fans, starting with these new storylines from the original series that recapture the magic of the original Turtles comics. Additionally, in fourth quarter 2012, Nickelodeon will premiere a new CG-animated version of the wildly popular Teenage Mutant Ninja Turtles franchise. 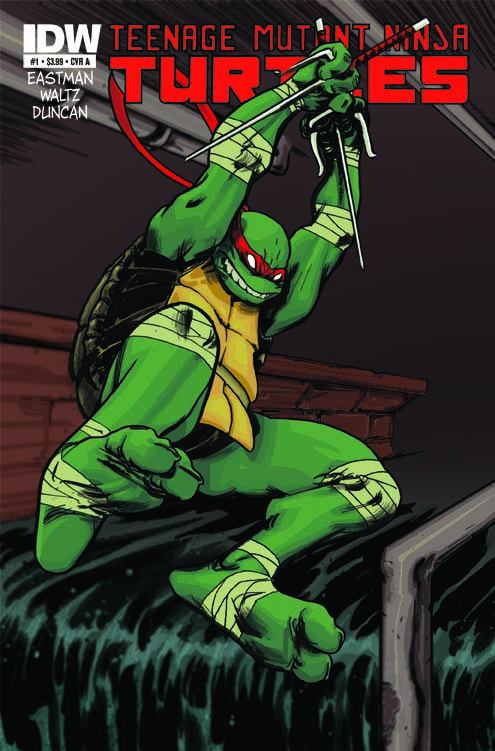 About IDW Publishing
IDW is an award-winning publisher of comic books, graphic novels and trade paperbacks, based in San Diego, California. Renowned for its diverse catalog of licensed and independent titles, IDW publishes some of the most successful and popular titles in the industry, including: Hasbro’s The Transformers and G.I. JOE, Paramount’s Star Trek; HBO’s True Blood; the BBC’s Doctor Who; Toho’s Godzilla; Nickelodeon’s Teenage Mutant Ninja Turtles; and comics and trade collections based on novels by worldwide bestselling author, James Patterson. IDW is also home to the Library of American Comics imprint, which publishes classic comic reprints; Yoe! Books, a partnership with Yoe! Studio; and is the print publisher for EA Comics.

IDW’s original horror series, 30 Days of Night, was launched as a major motion picture in October 2007 by Sony Pictures

and was the #1 film in its first week of release. More information about the company can be found at IDWPublishing.com.

Nickelodeon, now in its 32nd year, is the number-one entertainment brand for kids. It has built a diverse, global business by putting kids first in everything it does.  The company includes television programming and production in the United States and around the world, plus consumer products, online, recreation, books, and feature films. Nickelodeon’s U.S. television network is seen in more than 100 million households and has been the number-one-rated basic cable network for 16 consecutive years. For more information or artwork, visit http://www.nickpress.com.  Nickelodeon and all related titles, characters and logos are trademarks of Viacom Inc. (NYSE: VIA, VIA.B).