When a company announces that they are rebooting a cherished franchise, they have a very fine line to walk. Mess with the core concept of the franchise and consumers won’t be happy, but don’t alter the franchise enough and customers will think that you were not being creative and the reboot was a waste. It’s been a long time since we last saw Lara Croft in a full-fledged adventure. Thankfully, Crystal Dynamics and Square-Enix took their time in rebooting the classic franchise and delivered one of the best games of 2013.

Tomb Raider starts with a young Lara Croft adventuring with a documentary crew in search of a mysterious island. She’s not the confident adventurer you may think you know; she’s timid and afraid to speak her mind. She does not trust her instincts and has serious doubts about living up to her father’s prestigious life. That sets the basis for a believable origin story that sees Lara evolve over the course of the game. The story unfolds when the ship Lara and friends are on is wracked by a storm and they find themselves stranded on a mysterious island with a group of cultists whose motives are unknown. Although the story itself takes a few predictable twists and turns, the main star is Lara. She evolves slowly and believably over the course of the game, from timid and afraid to confident and fearless. This is a game that could have been title Lara Croft since, unfortunately, none of the other characters get any of the love Lara gets. Each character is a stereotype of adventure films and games. There’s the father figure; the tough, hard as nails woman; the big Samoan; and the computer geek. They’re cardboard cutouts to Lara’s 3D model. Even the villain is barely fleshed out and is hardly even seen for most of the game.


Grounding things in realism has been a trend in entertainment since Batman Begins in 2005. The previous adventures of Lara Croft had gotten more and more unbelievable with each release. For the reboot, Crystal Dynamics took Croft and smashed her into the ground, flung her off ledges and had her take one of the most severe beatings I have witnessed in gaming in a while. She has an absurd ability to shake off even the most brutal of falls, taking out the realism that Crystal Dynamics tries so hard to create. When you’re in control of Lara, however, she dies in ways that remind me of Dead Space; she can be shot, stabbed, crushed, impaled, mauled and lit on fire. Some of these deaths even have their own cutscenes that accentuate the brutality. When it first happened, I was a little shocked, as I always remembered Tomb Raider being a Teen-rated game. This one definitely earns its Mature rating.

Once you get past the numerous ways Lara can die, you’ll find that she can kill with the same amount of ease. A lot has been said of how simple the transition is that Lara makes from crying her eyes out after killing her first enemy to murdering hundreds of enemies and small animals over the course of the game. There’s one instance where a wounded enemy is lying on the ground, moaning for death. With a quick bullet to the head, Lara quips “Go to hell.” It’s a very sudden and unbelievable change in character, akin to Jason Brody’s change in Far Cry 3. However, you can also look past that to find a third person shooter that’s at the top of its class. Controls are tight, headshots are rewarded, and taking cover is seamless. When you get in a firefight, and there are plenty of those, you’ll find that Lara is more than capable of holding her own. The weapons are standard shooter fare, but you collect scrap from fallen enemies and chests that can be used to upgrade your weapons to make them far deadlier. These upgrades range from simple magazine enlargements to a grenade launcher attachment. Although it is fun to upgrade you weapons, it’s a little farfetched that Lara can craft these upgrades from scraps that she finds lying around.


Once you have gotten your arsenal, you’ll find that each part of the map is huge and ripe for exploration. Journals, chests, relics and other collectibles are scattered everywhere, granting you with back story of the island and its inhabitants. You’ll also find that tombs have made their return and are refreshing change of pace from shooting things. The tombs are delightful in their simplicity. Though they’re not brain-achingly difficult, they do take a few minutes to complete but the reward of getting it right is great. Every tomb rewards you with XP in the end, which can then be used to upgrade Lara’s skills. These skills allow Lara to gather more loot from corpses, kill enemies with greater ease, or see more collectibles. RPG elements are in nearly every game these days and Tomb Raider is no different. It’s fun leveling up Lara and trying to get her as powerful as possible, since doing so adds to the overall experience of the game and contributes to the evolution of the character. 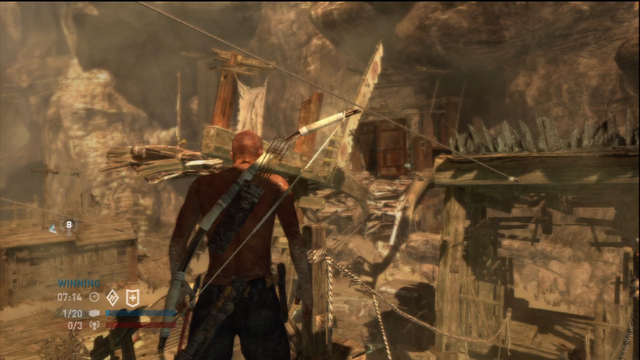 The single player campaign of Tomb Raider competes with any of the adventures of Nathan Drake in the Uncharted series. Unfortunately, Crystal Dynamics decided to add multiplayer to the mix. This is something I wish had been left on the cutting room floor. Though the idea of survivors against cultists is a good one in theory, the multiplayer is lackluster at best and dreadful at worst. The modes are uninspired, the environments are lacking, and the combat is not as fun as the single player. If there was ever an instance of single player and multiplayer being completely different from one another, Tomb Raider would be it. It is really sad to see the great single player campaign weighed down by the disappointing multiplayer. It is just another reason for not giving every single game multiplayer.


Though reboots are one of the trickiest things to pull off in any medium, it seems like Crystal Dynamics had no problem doing it for Tomb Raider. This is one of the best third person games of this generation. The gameplay is fluid and simple; the platforming and tomb raiding is fun and rewarding; the upgrade system is useful and begs to be completed; the evolution of Lara is one of the best origin stories in awhile. Though there are a few cons that take away from the realism, Tomb Raider is an experience that should not be missed. If this is your first foray into the franchise, it’s a great jumping off point. If you’re a series veteran, you’ll feel right at home. Either way, Crystal Dynamics and Square-Enix have proven that if the time and care is taken, reboots can be a worthwhile experience.