Anticipation is something we all feel rather you love games or you don’t. Some people occasionally garner a certain level of anticipation that makes them want to explode with excitement for their favorite upcoming game. That is just what I (Jay Malone) and fellow Xbox Team member (and Blade Kitten reviewer), Jon Jamrog, will be doing below. This list is not limited to exclusives nor is it limited to games releasing in 2010.

I’m a huge Metal Gear Solid fan and while I realize the large differences between previous MGS games and Rising, Rising is still packed with things to get excited about. It wasn’t until this year’s E3 that I got extremely anxious for it. Everything that was shown peaked my interest beyond belief.

When I actually think about it, there’s not one specific thing I’m excited for. I think it’s truly the thought of getting another hopefully great Metal Gear Solid game in my hand, despite its differences from previous games, that makes me as giddy as I am. I also really loved the Raiden in MGS 4 so I’m excited to see him finally unleash his full badassery in Metal Gear Solid: Rising.

Catherine caught my eye immediately because A) It’s developed by Atlus and the Persona guys, who made two of my most favorite games ever, and B) The art style is mesmerizing, but in the creepiest, most Japanese way possible. Everything I’ve seen in that game is pink combined with some other color, and I do love pink. 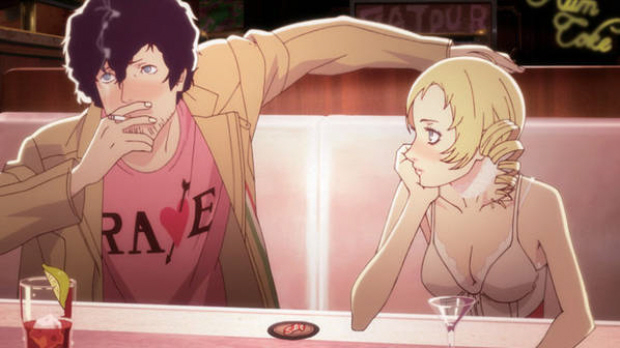 Of course my main attraction to Catherine is the fact it’s done by the guys that done Persona 4 and 3. It stinks that this probably means there isn’t a Persona 5 but in all honesty, it would’ve been near impossible to top 4.

I love Bioshock, I thought the first was one of the most revolutionary titles to ever see the light of day.  2K Marin then picked up the next Bioshock and done wonders with it, delivering a fantastic, albeit slightly flawed at times, story all topped off by a beautiful and unforgettable ending. There’s has not been a single word said about Bioshock Infinite that has turned me off of it in any way. It’s done by Irrational, it’s on a huge dev cycle, it’s totally different from the previous Biocshock’s (Though I wouldn’t complain if I got another Bioshock from 2K Marin), and on top of that, it’s in the freaking clouds, people. The clouds.

The atmosphere, the story, the entire tone they’re taking with it, it intrigues me all over again, just like Bioshock 1 did way back when. Very rarely does a game give me that giddy feeling when its name pops up, but Bioshock Infinite does just that.

What can I say? Halo fever is spreading. As far as big titles left on the 360 in 2010 it's pretty hard to ignore the Halo machine. While the iconic Master Chief is noticeably absent this time, Halo: Reach is still set to be one of the highest selling video games on any console this year.

Halo: Reach is a milestone, it marks the end of the Bungie era of Halo shooters and leaves the future of the series in the hands of 343. Will Reach be a fitting end to Bungie's Work? Or will it fall flat like a broken banshee? The September 14th release date is rushing toward us and only time will tell if Halo: Reach becomes the true successor to Halo 3 that we all have been waiting for.

2. Kinect (and some launch titles):

While I am still not completely sold of the whole Kinect device, it is one of the biggest things on my radar. On paper it has the potential to revolutionize the way we interact with our 360. Voice control has been confirmed for launch and any addition that allows me to be even more lazy is welcome.

The launch titles I am most excited for are Harmonix's Dance Central and Ubisoft's Your Shape:Fitness Evolved I think both games demonstrate interesting use of the technology. Dance Central will finally allow me to get my white boy freak on (in the safety of my own house) and Your Shape: Fitness Evolved looks like a fantastic way to get pinpoint information on your body. Strangely enough, I am more excited for the 3rd party releases for Kinect than actual in house games. Kinectimals, Kinect Sports, Kinect Adventures... They all see way too gimmicky. We will have to wait in see if these prove to be more than just kiddy demos.

I am a huge Star Wars nerd. I have loved the series ever since I was little. I mean come on, who doesn't want to be an all powerful Jedi Knight? The announcement for the original Force Unleashed seemed almost too good to be true. Radically over the top force powers in environments that bended and broke realistically-- It was unreal. While the final product had it's issues gameplay wise and the physics engine wasn't utilized as much as hoped it was still a great game in it's own right. 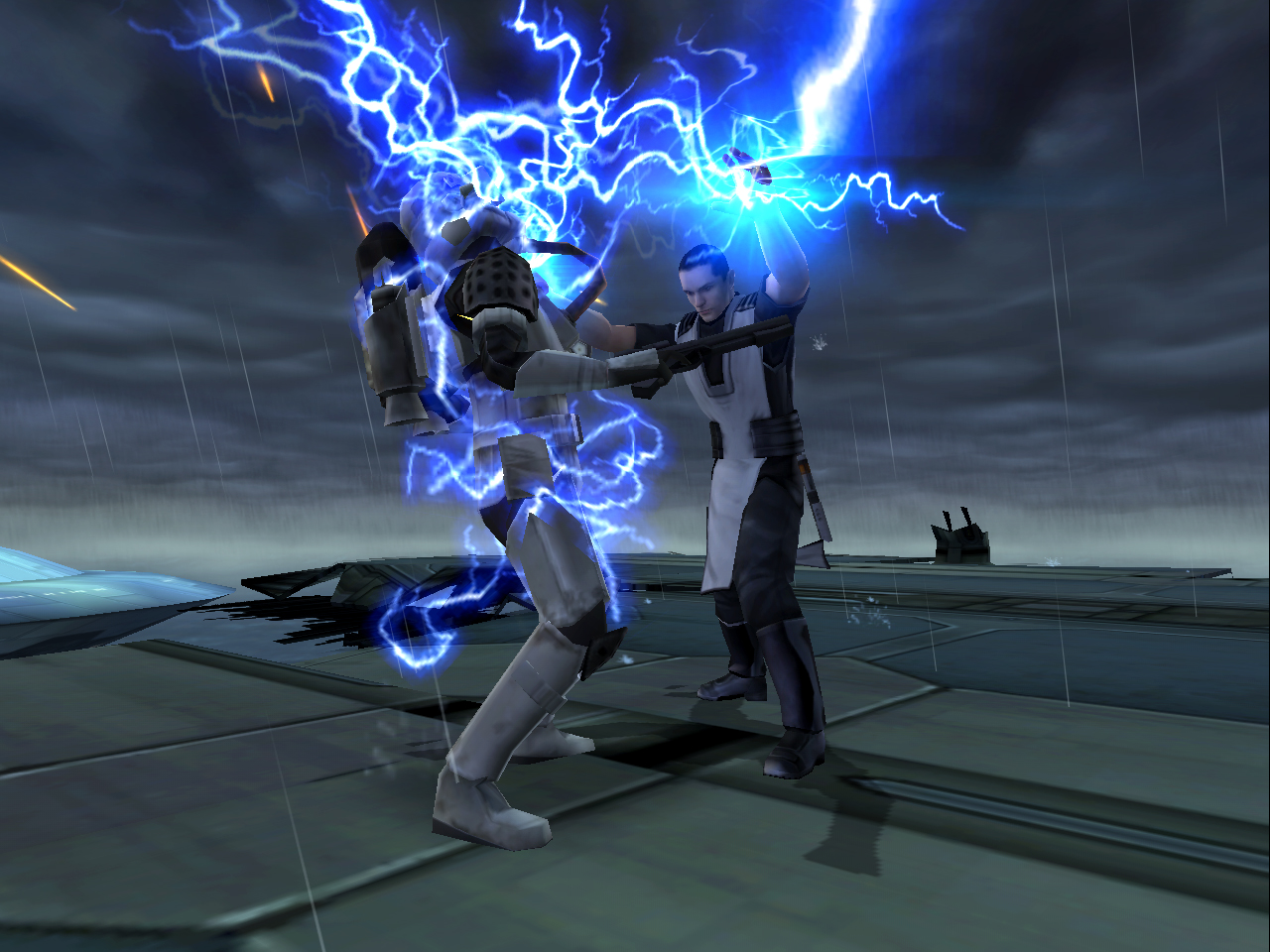 The surprise of a sequel both alarmed and excited me. The ending of the first game tied everything up with a nice little bow. There weren't questions left unanswered and it bridged the new and old trilogies nicely. Exploration into a sequel also opened the doors to fix all the problems that bogged down the original. Based on the footage we have seen so far it looks like Lucasarts is going to pull it off. More terrain looks manipulative, lightsabers actually slice limbs off, combat looks more diverse and it's just overall a beautiful looking game. All these factors plus all they got right with the first game is why The Force Unleashed II is the biggest blip on my gaming radar.

Maybe I’m wrong on this one… but the game looks great—racing and shooting hybrid? When the hell has that ever been done? It hasn’t been attempted (to my extent) since Interstate ’82 (well… it was terrible to say the least, but it did has some decent car shooting sequences nonetheless). Made by the legendary ID software, I wouldn’t expect nothing less than an eye spectacle to ogle for a couple weeks over. It may be a bit of a detriment that it looks almost like Fallout 3 and Borderlands—if they ever mated, this would be the child they would have birthed. This may cause some contra very and for me, I enjoy watching controversy, so when this comes out… I cannot wait to see the laser-light show. If a fight between Fallout and Borderlands fan boys doesn’t break out, I’ll just enjoy the game as is and ogle at the sheer beauty of the game because—well… if this game turns out something like Doom 3… it’ll look fantastic, but it’ll play like absolute crap, so here I am crossing my fingers in hopes this’ll turn into another magnificent gem that Id Software can hang on their ears. 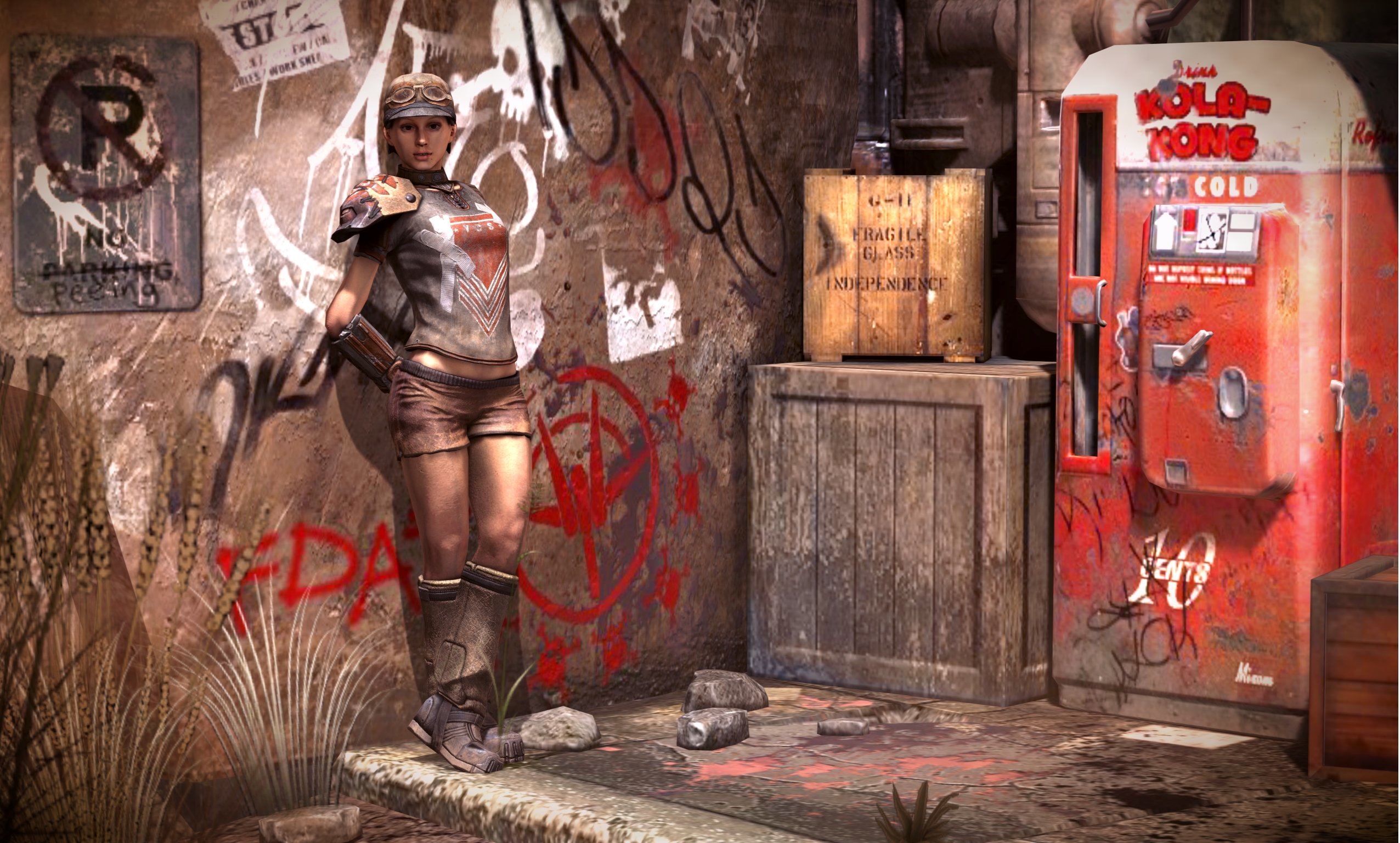 Alright, I ain’t no fanboy and I’m not one to play much multiplayer on Call of Duty less my friends do so with me (party chat or private chat to avoid the children) but the reason I put this on here was because of one fatal gem that I believe wasn’t supposed to be as popular as it was. I think you know which mode I’m talking about, everyone around the gaming world has been holding their breath on the announcement for a while now—if you haven’t heard much of it… well then I don’t know what to do for you. Its Zombies… yes, this is the only reason I can’t wait for Black Ops, it’s all because of this bloody mode. It’s going to be World at War, except with an M4 and stuff—maybe a helicopter in zombies and stuff, who knows… and perhaps a crossbow and stuff? If that happens to be in zombies, the game mode will be awesome. The multiplayer can suck as much tit dirt as it wants… as all of the multiplayer douchebags bitch and moan about the multiplayer, I’ll be rocking and socking some zombie ass in the mean time—happy trails.

Made by the guys behind the Act of War series, I’ve been watching this game for a bit now—it’s a real-time strategy that looks awesome and may actually require some deep level thinking  lacking in some strategy games out there… *cough* Command and Conquer 3 *cough* Halo War *cough*. The whole point of the game is to psych your opponent—or destroy his main base, whatever comes first. But there is one twist… there are several ways to defeat the armies each country has in possession. Brute force, which is what many players may be doing in order to win the game—but be careful, your opponent can do several things in return. He may deploy a large army to the flank of your base, either forcing you to retreat or move onto the base as planned. The mind game comes from the idea of a decoy army… so in the end, if you retreat, the army coming for you could’ve just been a mirage (I know, confusing ain’t it?). With this type of strategy, it’ll force many to play their cards methodically and strategically—welcome to the new generation of strategy (I just hope to god this game is good…)

I love cross over games like this. Ever since Marvel vs Capcom I've wanted to see other things join together, and make a great game with characters from both series. Maybe one day we can get Square Enix vs Atlus, or Namco Bandai vs Konami.

Back in the day I loved Marvel vs Capcom. For some reason I loved how two of my favorite fictional characters of the time (Megaman and Wolverine) could fight one another in a game. It honestly blew my young mind. When the sequel came out I was all over that as well. Now after so many years we finally get a new game. All I can say is “it's about damn time” 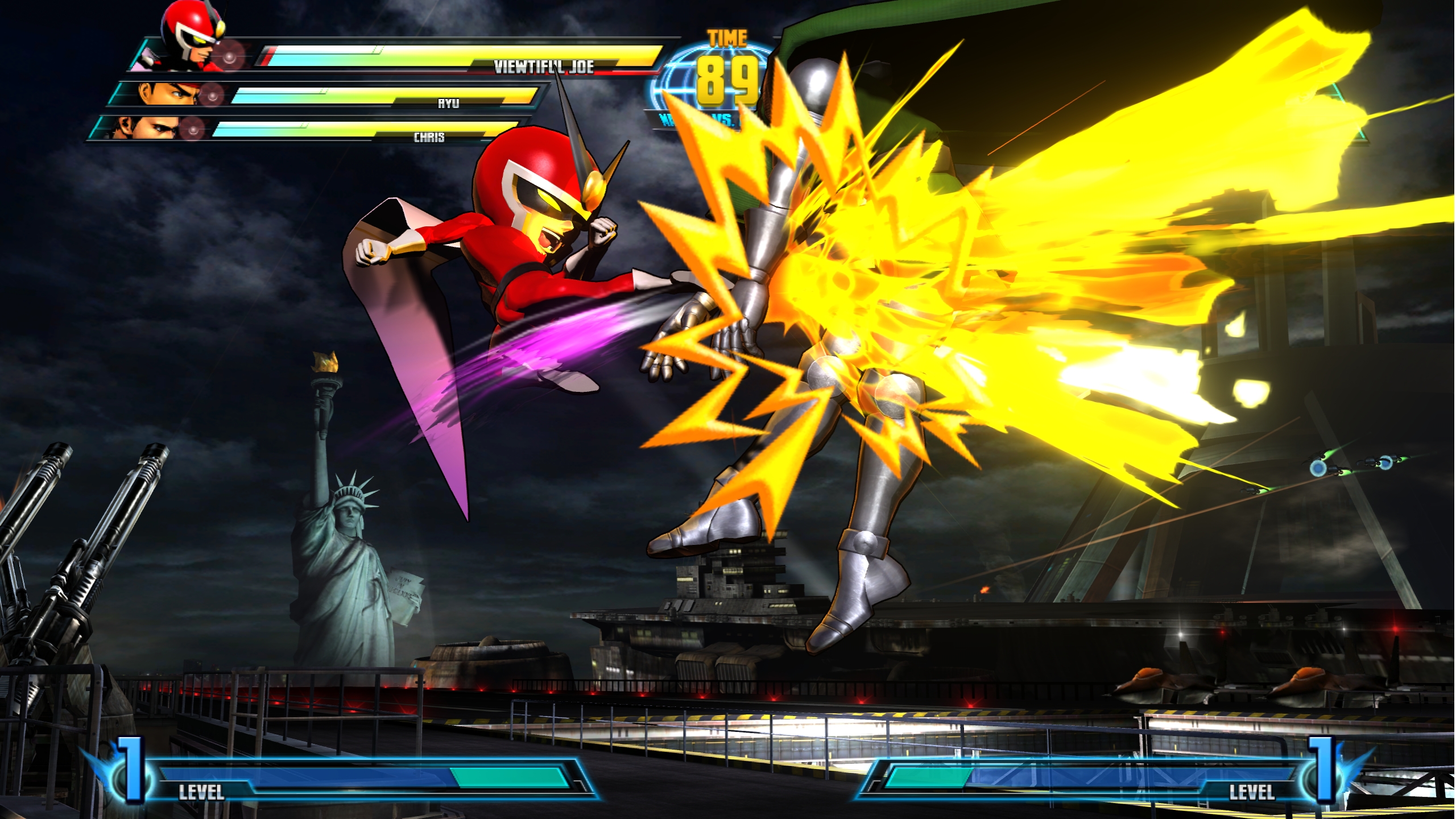 I've got to say there's just something about Gears of War that I love. It's just this big load of testosterone that is like nothing else. Besides the fact that unlike a lot of shooters the other characters have personality. It's all this that has me ready to make the leap of faith for this next game. I can only say that knowing this is the last game makes me sad, but I think it's better this way.

In all honesty I should say this is the only one I haven't pre-ordered yet, but only because I'm waiting to see the special offers that might come with the game (yeah, I own the Amzaon Lancer).

Quick closing thoughts: Jon will be attending PAX this weekend so check back to Player Affinity constantly for previews from him!