The Adam Sandler-headlined comedy Just Go With It opens in theaters nationwide today. Romantic comedy standby Jennifer Aniston stars alongside the comedian, but another actor takes a prominent role in the film: Brooklyn Decker.

You might be asking yourself, “Who’s Brooklyn Decker?” The 23-year-old’s claim to fame thus far is appearing in various Swimsuit Issues of Sports Illustrated and gracing the cover for last year’s issue.

It’s easy to say, “Oh great! Another hot model wants to be an actress!” and dismiss her thespian ambitions, but don’t hold a woman’s looks against her. Not everyone is cut out for Hollywood, but many models have gone on to great success in Hollywood, some of them even achieving legendary status in their craft.

Who can say whether or not Decker will have such success, but names like the ones below give us cause to look to the future with anticipation. Here are Player Affinity’s Top Five Models-Turned-Actressses.

She was a prominent model in the industry before auditioning for and surprisingly nabbing a highly coveted role - without any experience!

Diaz’s big debut was in The Mask as the drop-dead gorgeous Tina Carlyle, but she became something of an icon with her leading work in There’s Something About Mary. She charmed audiences the world over, and the question, “Is that hair gel?” became a classic movie line. For her work there she earned her first Golden Globe nomination and won the prestigious New York Film Critics Circle Award for Best Actress.

She followed that up with the sports drama Any Given Sunday and Golden Globe- and Screen Actors Guild-nominated performances in the quirky indie flick Being John Malkovich as well as the negatively received Vanilla Sky. She also starred in Martin Scorsese’s Gangs of New York in 2002, which earned her another Golden Globe nomination.

Most well-known of all, she headlined two Charlie’s Angels films and the Shrek series, the first and second of which took the world by surprise with its charm and biting wit. Sequels to these films helped her earn a big paycheck.

The actress is perhaps best known for her bubbly charm, often playing naïve and clueless as she did so well in "Mary." It’s not entirely dissimilar to Marilyn Monroe’s iconic work in The Seven Year Itch. Both actresses are completely aware of peoples’ perceptions of them. But instead of scoffing, they have fun with it, and the audience does, too. Diaz employs the same kind of self-awareness in the Charlie’s Angels films.

Just because she boasts a charming demeanor doesn’t mean that she shouldn’t be taken seriously; she can also bring some serious acting heat to the table. In Being John Malkovich, her co-star Catherine Keener “glams it up” to a certain degree, but the naturally beautiful Diaz opts to do the opposite. She dyes her hair a ghastly brown color, wears atrocious attire, and doesn’t wear make-up. The role might not require the amount of dedication needed for, say, Charlie Theron’s role in Monster (hint, hint), but there is a degree of integrity needed nonetheless. 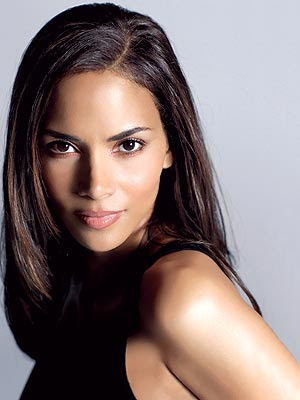 At 17 years old, Halle Berry was crowned Miss Teen All-American; she also took the Miss USA Pageant’s runner-up a year later. Her pageant work led to jobs as a model. This in turn provided her the opportunity to work on Living Dolls. Even at this early stage the actress took on an admirable work ethic, staying in character between takes.

She broke though in Spike Lee’s 1991 drama Jungle Fever, playing a crack addict. An acclaimed performance in the television miniseries Queen followed in 1993, and 1994 saw her playing secretary Sharon Stone in The Flintstones. She went under the direction of Warren Beatty in the 1998 satire Bulworth, and won the 1999 Emmy for Lead Actress in a Miniseries or Movie for Introducing Dorothy Dandridge, where she played the titular Oscar nominee.

At the turn of the century, she headlined the first of what became three X-Men films alongside Hugh Jackman and Sir Patrick Stewart. In 2001, she gave a powerful performance in Monster’s Ball, a film that helped the actress make history: she became the first African American to win the Lead Actress Oscar.

In Monster’s Ball, she fully realizes the character of Leticia Musgrove. It’s a true testament to acting, not only that she could hold her own against Billy Bob Thornton – as well as outdo him – but that she also revealed the soul of her character.

She has had some lows, too. She nabbed the Worst Actress “prize” at the Razzies for her performance in Catwoman; in fact, she was a good sport about it and actually showed up to the ceremony and parodied her own famous Oscar speech.

An acclaimed performance in Frankie and Alice serves as her most recent performance; she’s currently lined up for the promising Cloud Atlas, The Skank Robbers (God help us), and Shoe Addicts Anonymous.

Born in December of 1953, Kim Basinger first worked as a model. A modeling gig for a shampoo company in 1969 was her first, and the early 1970s saw her earning as much as $1,000/day on account of her burgeoning modeling career, as well as brushing up on her acting skills at the Neighborhood Playhouse.

Basinger relocated to Los Angeles in 1976 to pursue a full-time acting career. She earned some positive notices for her work in 1979’s From Here to Eternity, but she became famous after playing Domino in Never Say Never Again in 1983. A year later, she nabbed a Golden Globe nomination for her supporting role in Barry Levinson’s The Natural, and in 1989, she starred in Tim Burton’s take on the Caped Crusader, the original Batman.

But her most significant role to date was as Lynn Bracken in L.A. Confidential, for which she won the 1997 Best Supporting Actress Oscar over Joan Cusack and veteran actress Gloria Stuart. Post-Oscar, her career continued to flourish, receiving a $5 million payday for 2000’s I Dreamed of Africa and playing the maternal figure in 8 Mile. She most recently had a small role in Charlie St. Cloud.

Despite her Oscar for L.A. Confidential, and she’s exceptional there, I honestly find her work in The Burning Plain to be her most impressive. It’s a film I can’t truly recommend as a film, so to speak, but Basinger provides some absolutely devastating work in the film. Her face portrays the battlefield of emotions constantly flying through her head. Any still frame of her performance conveys a new insight, a new realization.

Unfortunately, Basinger, 57, has no projects lined up at the moment. Let’s hope that changes someday soon.

While taking acting classes in New York, Julia Roberts signed on with the modeling agency Click. After starring in lesser known projects and small gigs, she picked up some minor prominence for Mystic Pizza in 1988, but a year later is when things heated up. That’s when she starred in the drama/ultimate chick flick (eat your heart out, Terms of Endearment) Steel Magnolias, acting alongside acting heavyweights Sally Field, Shirley MacLaine, and Dolly Parton.

She picked up a Golden Globe for Best Supporting Actress and an Oscar nod in the same category, but in 1990, Roberts’s turn as Vivian Ward in the romantic comedy Pretty Woman served as her big breakthrough. She won over the hearts of audiences nationwide, and picked up her second Academy Award nomination, this time in the Lead Actress race; she also won her second Golden Globe.

A string of audience favorites, including Hook, Sleeping with the Enemy, and The Pelican Brief, followed. Then in 1997, she returned to the awards derby to some degree with a Globe-nominated performance in My Best Friend’s Wedding. She starred opposite Rupert Everett, Dermot Mulroney, and the aforementioned Cameron Diaz; the film was both a critical and commercial success.

Roberts has mostly followed up with more audience favorites like Runaway Bride – opposite Pretty Woman co-star Richard Gere – and Notting Hill as well as the "Oceans" franchise. However, she made a grand return to the awards scene in 2000 with Steven Soderbergh’s Erin Brockovich, nabbing a slew of prizes including her first ever Academy Award for Best Actress.

She picked up Golden Globe nominations for failed Oscar pony Charlie Wilson’s War and the early 2009 release Duplicity. Her most recent project was Eat Pray Love; she can be seen later this year in Larry Crowne with Tom Hanks.

She’s definitely one of Hollywood’s most intriguing actresses. She effortlessly moves between serious acting projects (Erin Brockovich, Closer), lighter mainstream fare (Ocean’s, Mystic Pizza), and films that define the term “chick flick.” Those films, in Julia’s case, often fall somewhere between the serious and lighter. Films such as Stepmom obviously fit the former, while the frothy My Best Friend’s Wedding easily slips into the latter.

Though she won an Oscar for playing the titular role in Erin Brockovich, audiences most remember as Vivian Ward in Pretty Woman. A perfect role for a young ingénue, it was oddly turned down by Daryl Hannah, Molly Ringwald, and Meg Ryan. I honestly can’t picture those three in the role. Well, at least not performing as well as Roberts did. She’s simply a captivating presence on screen, making you fall in love with her time and time again. Even in the nearly abysmal Eat Pray Love, she holds your interest and makes you genuinely care about the course of actions she’s taking. 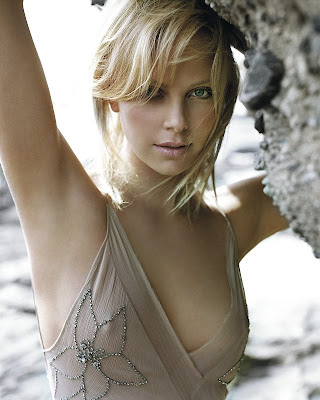 The actress from South Africa started out as a model at age 16 upon winning a modeling contest. Her modeling career began in Europe but a year later moved to New York. She pursued a career in ballet, since she very little enjoyed modeling, but that worked to no avail because of a knee injury. In 1994 she moved out to Los Angeles and had no luck with Hollywood agents. An outburst at a bank oddly provided her with an agent’s card and the promise of an acting gig if she learned English.

A 1995 B-movie in which Theron had less than a minute on screen was her screen debut. Beyond that, she’s starred in the thriller The Devil’s Advocate, family-oriented adventure Mighty Joe Young, and the successful remake of The Italian Job.

She’s provided great work throughout her entire career, but her Oscar-winning performance in 2003’s Monster is easily Theron’s finest achievement. She both expresses the anguish of the character and a fervent dedication to the craft of acting.

Another Oscar nomination followed in 2005 with North Country. Then there was the action-oriented dud Æon Flux -- no Oscar nominaton. She’s recently acted in projects such as In the Valley of Elah (2007), Hancock (2008), and The Road (2009). She returns to the cinema later this year with the Diablo Cody-penned Young Adult.

A big work ethic really paid off for her with Monster, and it’s simply her most impressive acting to date. I doubt she’ll ever top her performance there, but that isn’t a slight on her other work. In The Italian Job she was a fun presence and fit well into the cast. Additionally, she does her best to give an emotional depth to her character in Hancock. She isn’t successful, but blame the haphazard script for that one.

Outside of Young Adult, she’ll again venture into action films with Mad Max: Fury Road and Snow White and the Huntsman. Oddly enough, she’ll play the Evil Queen in the latter, making it difficult for the Magic Mirror to decide who really is “the fairest of them all.”