By: Justin Moody | Comic News | November 4, 2010
Just because November 2 has passed doesn't mean your vote have to stop voting. Top Cow Productions, Inc. is proud to announce that the voting polls for Pilot Season 2010 are now open, allowing readers to vote for their favorite title out of the five one-shots that were put out at this past month.

Polling stations are now set up at the Top Cow site (www.topcow.com) with additional polling stations to appear on various comics news sites, blogs and social media platforms. Readers can vote multiple times a day up until the polls close on November 30, 2010.Pilot Season is an annual initiative Top Cow began in 2007 that borrows its concept from the television industry: "Pilots" are submitted for consideration to be "picked up for a season," except instead of TV executives deciding their fates; it's the fans who decide by voting online.

Below are the titles in contention this year along with a campaign plea from each book's writer(s): 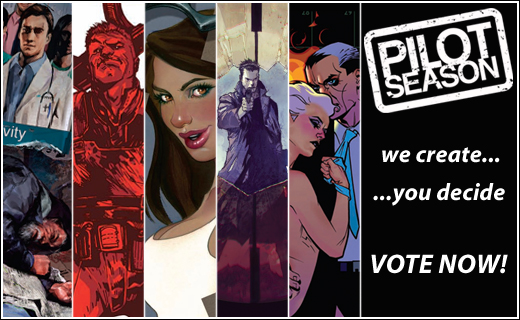 "By voting for 39 MINUTES, you'll give a voice to all of the poor downtrodden bank robbers of the world. If you don't speak for them, who will?"

"ASSET is about the dangerous side of love in the digital age. You meet that perfect person online thanks to next generation personality profiling and everything is hearts and flowers. Only they aren't your perfect match, they're an enemy spy and they're going to get you killed. Vote for me, David Marquez and Bill Farmer if you've ever been punched in the jeans by love."

"I think we've created a world and a central mystery that people will want to return to. The history of Longevity and its miracle drug Forever is inextricably linked to Ryan's personal history which should make for a thrilling journey, full of surprises."

"CROSSHAIR should win because it's classic action hero style wish fulfillment with a paranoid psychological thriller twist. Justin Weller is a true man of action who protects his family and his honor at all costs and is the type of hero our ever more dangerous world needs right now."

7 DAYS FROM HELL by Bryan Edward Hill and Rob Levin