Comic books are a lot like day time soaps in the regards that they never end. Even if there's no reason for them to continue, because the original story ended or they've simply run out of good story ideas. Witchblade is one of those titles that people tend to say, "I've never read Witchblade" or "They still put out Witchblade?" That's because all of the mysteries that were there in the beginning of Witchblade have all been answered. Sure they've added more with the 13 artifacts, but that is something that is larger than the title itself.

Witchblade 137 has little to do with Artifacts, Top Cows big cross over event going on right now, or even the previous issue of Witchblade. Instead the issue is used to integrate pilot season winner Necromancer into the Top Cow Universe proper. So now instead of just crazy artifacts and their bearers the Top Cow U has demons to deal with as well.

The issue starts with and stars Abby the Necromancer. She recaps her life in her journal as people often do. She begins by summing up her experiences in New York on a school trip. After several "modern art" museums she finally ends up at the art museum of her choice. There she is drawn to an exhibit that has yet to open to the general public. She's there no more than a few minutes when a crazy naked man runs into the exhibit straight towards her. He breaks the glass to a sacrificial knife and pulls it from the display case. 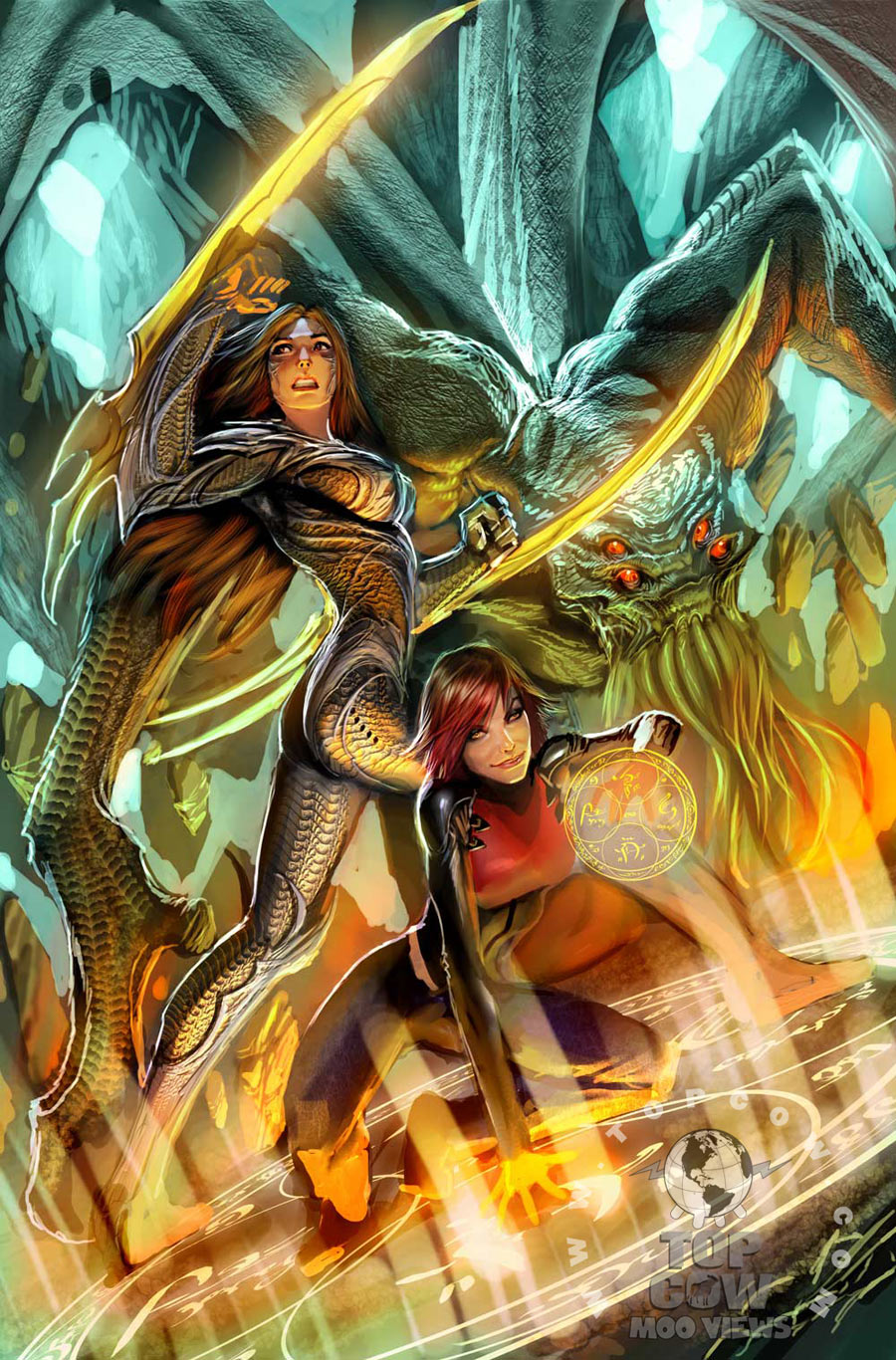 He looks at Abby crazily for a moment before stabbing the knife through his brain. The crazy naked man drops to the floor dead. Abby of course has no choice but to stay and answer questions for the cops since she passed out at the scene of the crime. Wouldn't you know it, Sara the Witchblade bearer just happens to be the lead detective on the case. She asks Abby to level with her and clears the room to talk to her. Now that it's just the two of them Abby opens up about herself and her power. She awakens the dead man to talk to him.

In a very comedic way, the man awakes and pulls the knife out of his face and begins talking with Abby. He explains that he had a demon living inside of him making him do crazy things and ruining his life. The knife was the only thing that could set him free so he killed himself with it. At this point the demon that killed Abby's family jumps out of her mouth to basically says, "Hello". Abby and Sara team up and beat the crap out of the demon (for now) and Sara has to add yet another weirdo to her friends list.

The story isn't bad at all; in fact it's quite good and very interesting. The problem is that at no point does it feel like a Witchblade story, nor does it have anything to do with Witchblade. This issue is just used to shoe horn the Necromancer world into the Top Cow U. Really this could have been a one shot on its own, but I'm sure Top Cow thought it would sell better to put it in its flag ship book. Ron Marz does what he does as a writer. There's a very consistent pacing to all of his stories that just becomes familiar to read. The story never really pops with excitement or surprises you around the turn, it just is.

It's a good book, but it really made me wonder why Witchblade is being made anymore. It has a guest star in practically every issue and the world the Witchblade is in, is bigger than her now. It would almost be smarter if Top Cow just created a new title that allowed all of their characters to show up and play in the book without it having to rely on just one character to drive the title forward. One thing this issue did very well was build interest in Abby and the Necromancer line and I'm sure that's why it was put into Witchblade to reach a wider audience. The problem is people reading Witchblade are going to be disappointed when their main character is sidelined throughout the entire issue.