In late 2009 Runic Games took the PC Gaming world by storm. Out of what seemed to be nowhere, they introduced an isometric styled RPG named Torchlight that not only drew numerous comparisons to Diablo, but also brought up questions of is it actually better than Diablo. So having played its original PC version, I knew mostly what to expect upon entering the XBLA port of Torchlight. But some questions still remained; would the controls lend themselves to consoles well? As well as would the game look as good as it did on PC?

The biggest question of the two is obviously the one regarding the controls. Would Runic be able to map the PC controls well enough to an Xbox 360 controller where it didn’t feel too much like an obvious port? And the answer to that question is: Mostly. The standard controls such as moving around, attacking, and zooming in and out the camera all work well. Attacking is done simply by holding down the X button, which is nice because having to repeatedly tap a button during a battle would be very tedious and thankfully Runic Games knew that. But once you get into using the abilities, that’s when things can get complicated. 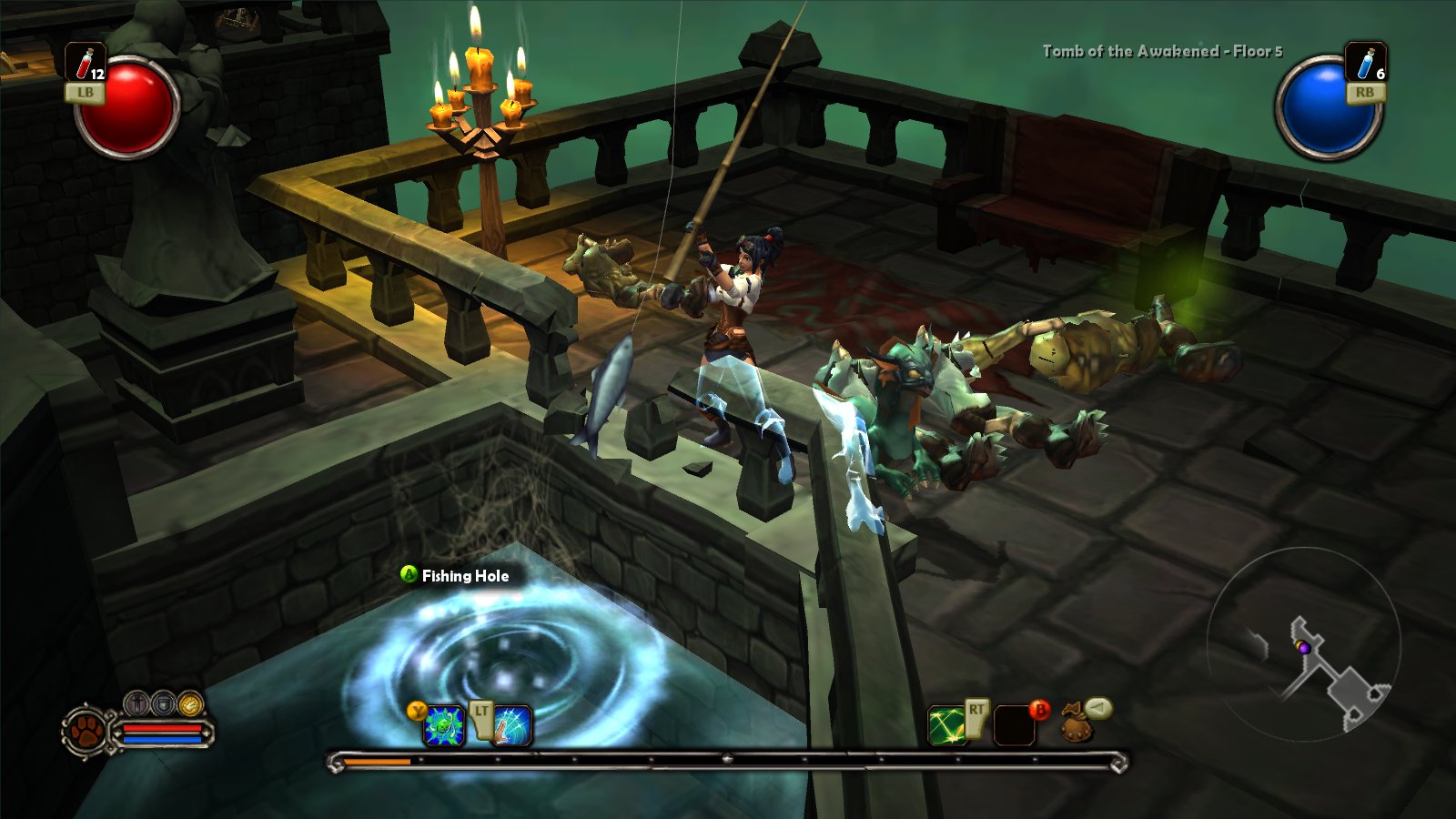 There are a total of three classes within Torchlight: The Destroyer (Melee), The Alchemist (Mage), and The Vanquisher (Ranged).  These classes all have their own separate skill trees, where you can use points bestowed upon you as you level up to unlock certain abilities, some passive and some that require you to hit a button to activate them. You can of course assign these abilities to whatever button you want, as long as that button is B, Y, LT, or RT. As I’m sure you noticed, that is only four spaces to place spells into and while at the beginning of Torchlight that is all you need, once you get deeper into the game, you’ll wish you had six or seven open slots to use.

The game does allow you four other slots to use but to access them you have to press down on the D-Pad while in combat. Which can leave you holding down X to attack, pressing down on the D-Pad, using the ability you want, pressing down again, and while doing all this, having to watch your health so that you don’t die. It’s incredibly cumbersome and at the end of the day, not worth the risk to try and acquire more than four skills.

One of Torchlight’s strongpoints is its visual style. It has a very cartoony, almost World of Warcraft esque look to it which is just gorgeous. The many different environments constantly pop with bright, vibrant colors throughout the game. And when the frame rate isn’t taking a dive, the spells can be jaw dropping with how incredible they look. But that’s the other issue with Torchlight, the frame rate can at times take serious dives. There were even a few instances where it seemed like the frame rate was dropping into single digits. This is an issue I never once experienced in playing its PC counterpart. Thankfully, the serious frame rate drops don’t happen often but when they do, they can be jarring. 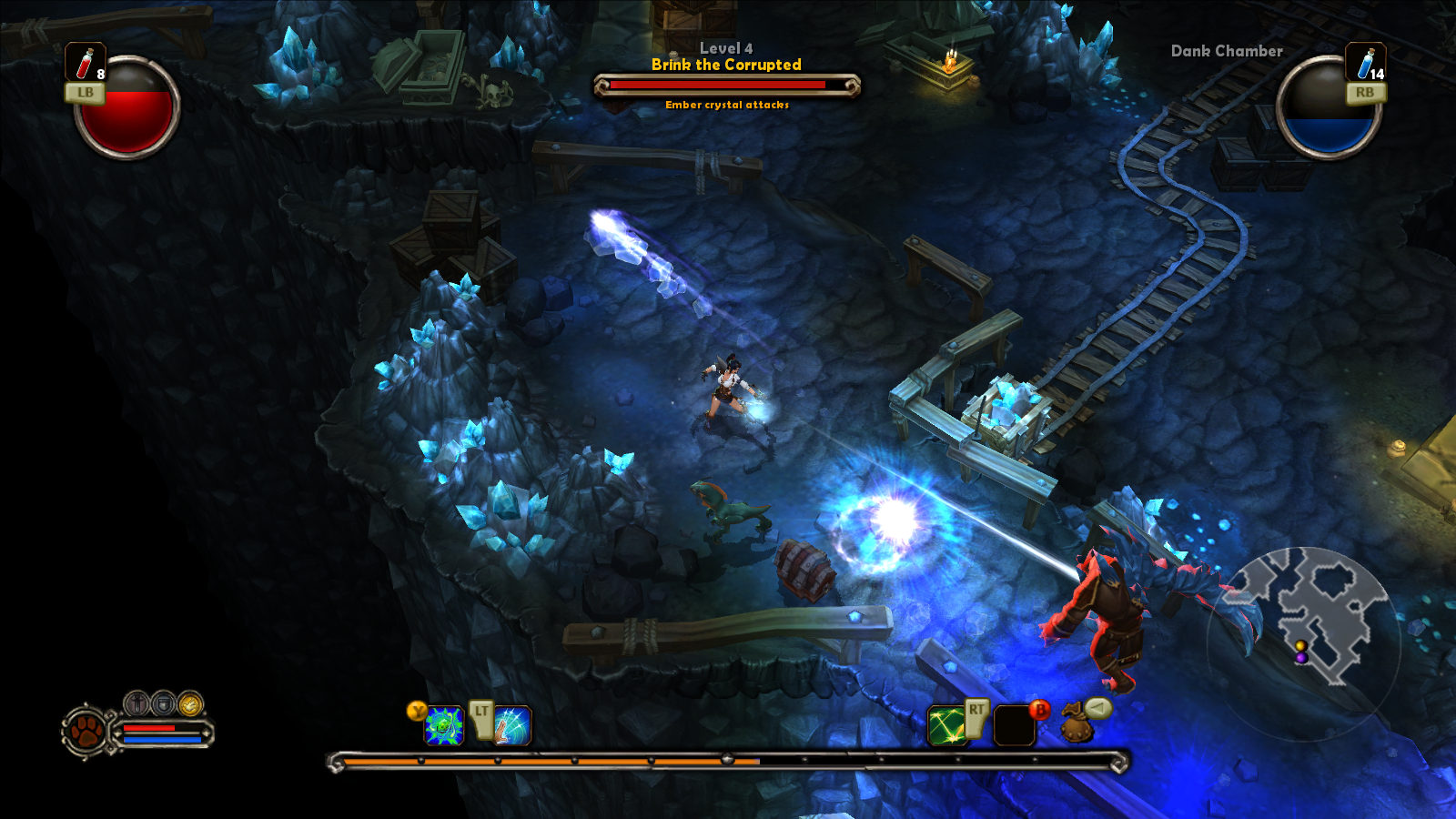 If there’s one word you’ll be thinking the entire time you’re playing Torchlight it will be “loot.” There’s loot around every corner you turn and almost every enemy you kill. I guarantee you’ll be hammering on that A button instinctively throughout Torchlight just trying to get more and more loot because it is surprisingly addicting. Something that games don’t do as much as they should is give the armor and weapons you have equipped their own unique look and while not everything in Torchlight has its own look, the variety is enough that you will never find two characters that look the same. And on top of that, it seems like your character just looks cool as hell no matter what he’s wearing.

Torchlight’s main story is focused around the scientist Alrac finding the mineral Ember which is the essence of magic and the keystone in alchemy. And you then need to stop him before he does some real bad things to the town of Torchlight. The story isn’t a big part of Torchlight in any way but it provides enough of a motivation to make you go out and get more loot. The levels in Torchlight are composed of basically one big descending dungeon. You go through separate floors on your way down, usually culminating in a boss fight every fifth or sixth level. The most fascinating thing about these floors is that they’re randomly generated. Certain floors and environments pertaining to the story are obviously fixed areas but a lot of the other environments are random, leading you to never know what beautiful piece of art you’re going to see next.

While Torchlight on XBLA is not as good as its PC brethren, it’s still a damn fine game that will provide you more fun than most 60 dollar releases out now. Torchlight is beautiful, inventive, and most importantly, fun. No matter if you’re a long time Diablo fan, or an avid hater of that style of game, you should try Tochlight.