In the movie industry, Pixar is one of the most highly regarded studios in the world. As they have honestly never made a single poor movie, that obviously did not change with Toy Story 3’s movie. The game is in a whole different league. Movie games are nine out ten times, terrible or bordering terrible. Once in every blue moon someone will do a good movie game, but it’s an extreme rarity. Did Avalanche Studios manage to deliver another blue moon?

Toy Story 3’s main feature that the developers have been touting very highly is the Toy Box mode. A mode that puts you back into your kid shoes as you can control an entire Wild West type town. In the mode, you can buy things from Al’s Toy Barn (Just one of the many satisfying homage’s to the series of films), shrink things, make things big, fully redecorate houses, and hell, fully redecorate the civilians of the town by throwing them into barber shops and clothing stores.

This entire part of the game is an absolute delight to play. It’s as exciting as it sounds and the added shrink/enlarge feature can lead to some of the most hilarious parts of the game. Such as shrinking Bullseye then riding him, the animation that follows is ridiculous but in a way that you can’t help but love. That’s the entire point of the shrink/enlarge feature really, comic effect, because after a bit, the goo that you throw into the item to shrink/enlarge does come out and the item goes back to its original size.

The way you earn things to buy from Al’s Toy Barn is quite simple and standard; you find small collectibles that lie throughout the game. Some are in the actually Toy Barn and some are in the story. As the actual creating and editing in the Toy Box is one of the many fun things to do, you really start to check every corner and tight crevice, trying to find that last little item.

If there is one downfall of this overall very fun and innovative feature, it’s the actual questing. They treat it as an RPG of sorts. 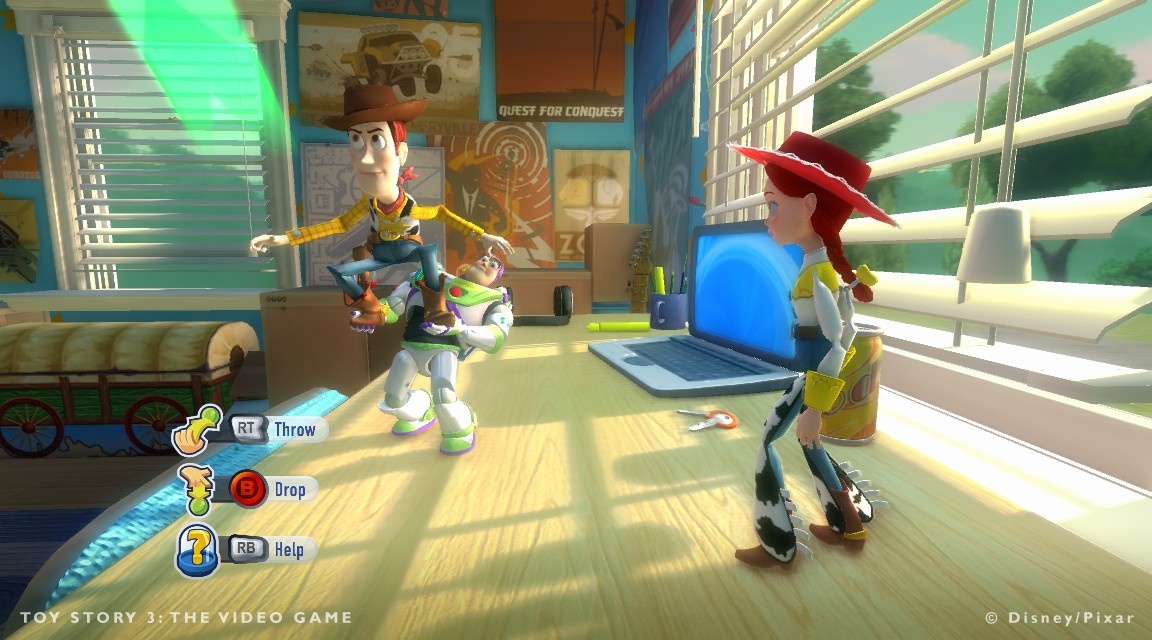 People have exclamation marks above their heads, you get the quest, and the exclamation mark turns into a question mark. The quest themselves can be very tedious at times, sadly. It’s usually no more than “Can you run to this area I marked on yourmap and pretend you’re doing something?” with the occasional exciting mission that helps you explore places you didn’t know existed. I understand why they implemented the questing, it’s to earn you more money and items, but with the wide variety of things to do in Toy Box, I don’t see why they had to limit you to only riding around to an area, doing a fairly unexciting task, then receiving money.

Apart from Toy Box, there’s also a standard run-of-the-mill single-player that was quite noticeably the second thing on their mind while developing Toy Story. That’s not to say it’s terrible, it’s just nowhere near the quality of Toy Box.

Once you enter single-player, it’s made quite obvious that the game is now a platformer, which was a little off-putting seeing as I came in after about 4 hours straight of playing in the Toy Box, but after a while, I got used to it. The platforming element is a mixed bag of exciting and pretty fun moments to times that make you want to absolute chunk your controller through the TV and yell at Woody to stop making that annoying “WOOHOO” of his. It’s the combination of the ludicrous camera angles and poor design that make you really furious. The poor design really befuddles me as it’s obvious with the rest of the game that Avalanche Studios is very talented, I guess that’s one of the downfalls on working on a game that has to be released the same week as the movie. This combined with the lackluster piecing together of the movie’s story, it’s just very disappointing at times. 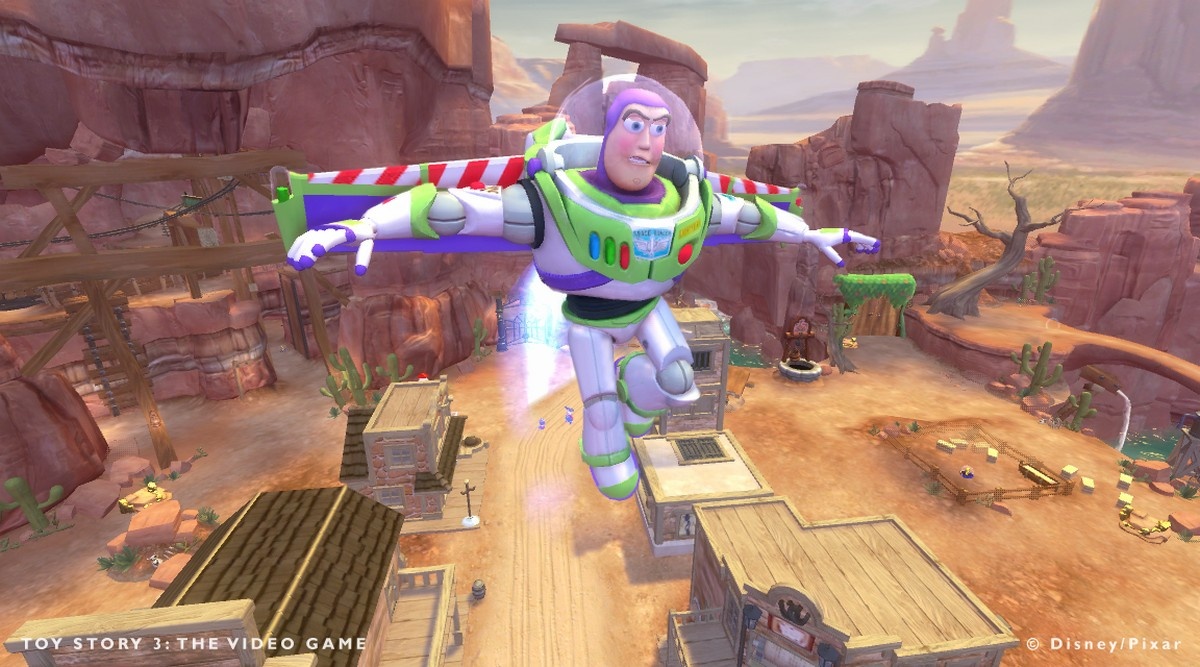 The thing that keeps you chugging along throughout the story is the characters. They’re no different from in the movies but that doesn’t stop them from being instantly appealing and as lovable as ever. Also, the sheer fan service to Toy Story fans spread throughout the game is really remarkable and always made me smile every time I spotted it. You remember the video game Rex was playing in Toy Story 1? You get to play that game! And it’s really fun, at that. The story is topped off by a final level that was ludicrously fun and fit in extremely well with the ending of the film.

If anyone had expectations for Toy Story 3 it was more than likely that this would just be another bad movie-game that doesn’t deserve anyone’s attention. Thankfully, I’m here to say it does. No matter your age, if you’re a Toy Story fan (And if you’re not, then you’re probably the Devil), you must play this game. It’s an absolute blast playing around in the Toy Box mode that at times really got me back into that feeling that I once had while playing with toys as a kid and in the single-player, it can occasionally be frustrating and feel unbearable, but the homage’s, decent platforming, and final level make it all worth it. Toy Story 3’s game may not be an absolute smash hit, but it’s still the best movie-game I’ve ever laid my hands on.