Trade of the Month – Sweet Tooth Vol. 1 – Out of the Woods

Welcome to Trade of the Month! It's been a solid month since we made our pick of Sweet Tooth Vol. 1 - Out of the Woods from Vertigo Comics and Jeff Lemire. Take a look at what the comic section thought about this book that's been dubbed, "The new must read."

Summary - The first five issues of Jeff Lemire's acclaimed new series introduce Gus, a rare new breed of human/animal hybrid who was raised in isolation following a pandemic that struck a decade earlier. Now, with the death of his father, he's left to fend for himself . . . until he meets a hulking drifter named Jepperd, who promises to help him. Jepperd and Gus set out on a post-apocalyptic journey into the devastated American landscape to find 'The Preserve,' a refuge for hybrids.

Nicole - Jeff Lemire’s Sweet Tooth has been a phenomenal hit, and after reading “Out of the Woods” I can see why.  Gus and Jepperd are both very interesting characters that clash in interesting ways, with Gus being sweet and innocent and yet also being considered a “monster” hybrid and Jepperd being an almost sadistic, short-tempered and considerably “normal” human being.  The story has the common post-apocalyptic setting but Jeff Lemire’s art makes the cities seems more desolate and lifeless, an effect that has made me a huge fan of Lemire’s seemingly simple but pivotal artwork that helps make Sweet Tooth stand out on the shelf. 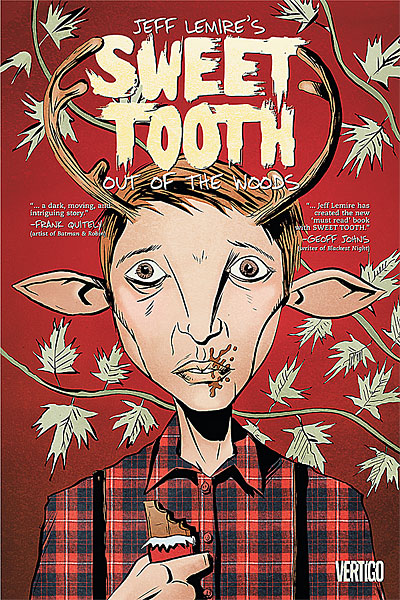 It’s hard to tell that Lemire has great cliffhanger endings with five issues collected together.  Reading Sweet Tooth was a more enjoyable experience (if a bit frustrating) when I had to wait every month with anticipation to see what would happen next.  This trade may take away some of the anticipation, but you get your hands on five issues with interesting character development, a surprisingly effective art style and a story full of horror and mystery that got even better after the “Out of the Woods,” story arc: but it’s still a great starting point for one of the best series being put out by Vertigo!

Jorge - Sweet Tooth is a book about being different, not only that, the graphic novel looks different too; mostly because it tends to look more indie than a regular Vertigo title. It is also another journey story like Y: The Last Man. It is a simple story, where the characters needs are to get from point A to point B. But is not the goal of the story that matters but the discoveries they make on the way to their goal. It is also an emotional, self-discovery journey. At least for our hybrid main character: Gus, who was sheltered from the world by his late father and now gets to experience the good and the bad things this apocalyptic world has to offer. But Gus is not alone on his journey; he has his own big, tough, violent protector named Jepperd. Jepperd is molded from the typical too-tough-to-die character cast, but he also serves as integral part of Gus' journey.

Much like Y: The Last Man, this book has a mysterious virus that swept the planet. There is a possibility, that fans of that series can see this book as a repackage of YTLM, except for the last man on Earth part, this book shares a lot of similarities with that series. But what set this book apart are the characters. The main characters share a very interesting odd partnership that for some reason delivers a unique chemistry for the reader’s amusement. If you like weird science fiction with good character driven moments and don't mind reading about a pathetic, candy loving, half human, half deer kid, then embark on this adventure and get ready to meet the hybrids.

Dustin – Typically when an Indie book gets so much mainstream love it’s because it’s actually mainstream in wolf clothing. With Sweet Tooth though you have a story and art that doesn’t care what it is, it just is. Jeff Lemire’s art style is not something the masses flock to. It’s rough and scratchy and intentionally inconsistent, but because of that it’s some of the most beautiful art you’ll ever see. The art plays into the story telling of the book so much that it’s hard not to start with it. The world of Sweet Tooth is simple, it’s The Road/an apocalyptic setting ever created with a genetic twist. The setting is just that, a place in which our characters can play and come alive and they do. 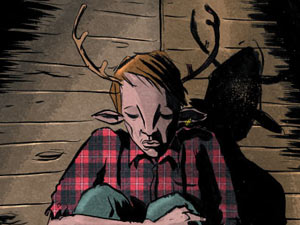 So much hinges on our characters dialog and actions that that’s what becomes interesting, seeing what they’ll do to survive in this world. There is a lot of heartache that resonates within everyone and Sweet Tooth plucks those strings and makes you really think, feel and care while reading the book. It’s been called a lot of things and it’s easy to tell everyone to read it (probably because everyone should), but the real fact of the matter of why it’s so good is because Jeff Lemire is writing a story for himself… we’re all just lucky to be reading it.

Neil – When I was told we had chosen Sweet Tooth as the book of the month I was hesitant to try this book out, but for some reason my curiosity overtook my hesitation and I decided to give this book a shot.  I mean. What is the worst that could happen?  That I don’t like the book and I chuck it away. 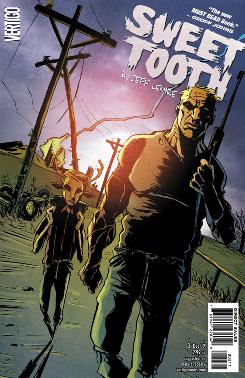 Once I picked up the book, I was hooked with Sweet Tooth. The book takes place in a post apocalyptic future and civilization is all but gone. The few survivors in the book are mutated, sick, or just completely insane.  Gus, lives a very sheltered life until one day his father dies and he is left to fend for himself in the world.  While walking in the woods, Gus gets into some trouble with some hunters that were hunting deer.   The hunters bicker over the boy and suddenly they’re killed by a mysterious man named Jepperd .  The two set off on an adventure to reach The Preserve, a place were kids like Gus are kept safe.   The book also explains Gus’s nickname of Sweet Tooth.  The reason for this name is that Jepperd doesn’t like his name and decides to call him Sweet Tooth because of his love of candy.

The first volume is outstanding.  Jeff Lemire does a great job with the story telling and art on this book.  He knows how to setup the tone and atmosphere of the book and he also does a great job of making you feel the expression and emotions of the characters.  He makes you feel like you’re in the book right next to these characters.  . The art on the book compliments the story well.  Just by looking at the panels without words you can tell that there is a lot going on in this world and you can feel the grit and struggle that these two characters are going through.  The twist in the end just left me in shock, but it left me wanted more.   Overall I have to say that Sweet Tooth is a great t book with great story telling and good art and it’s a book made with a lot of heart.


If you're interested in Sweet Tooth they're several options for you to read it. You can read the first issue completely free here, or if you head to our forums you can find the best place to buy the entire trade for nearly 30% off the $9.99 cover price. While you're there make a suggestion for what everyone should read next month and be sure to tell us what you thought of any of our previous months picks.