Trailer Tracker: The Hobbit, The Dark Knight Rises and more

Ahh, wrath, rising darkness and giant killers, not exactly trailers conforming to the holiday spirit, are they? Thankfully, the wrath will be delivered by the sultry Sam Worthington in the sequel Wrath of the Titans, the rising darkness will be against the villainous Bane in the second clip for The Dark Knight Rises and giant killers do not pertain to a psychotic sumo wrestler. That would instead pertain to director Bryan Singer’s latest, which will be another addition to the growing parade of fairytale reinventions debuting next year with Jack the Giant Killer. There is nothing a hideous monster hates more than Christmas — except for maybe the mistletoe. It’s Trailer Tracker.

Oh, and there is this little trailer for a rather no-name film called The Hobbit if you’re interested …

The Hobbit: An Unexpected Journey

… in having your mind blown. Both roped back in by circumstance and likely drawn in by the source material that made him an auteur to be reckoned with, Peter Jackson returned to the J.R.R. Tolkien universe and now unveils the trailer for part one of the “Hobbit” saga with “An Unexpected Journey.” This first looks seems to indicate that Jackson has slipped effortlessly back into the saga which has consumed so much of his life and the same whimsical tone is present throughout this “Lord of the Rings” prelude. The focus of this trailer seems to be more on setting up the tale rather than unleashing a hail of action set pieces, but considering this blockbuster is not hitting theaters for a full year, a lack of CGI completion is understandable. 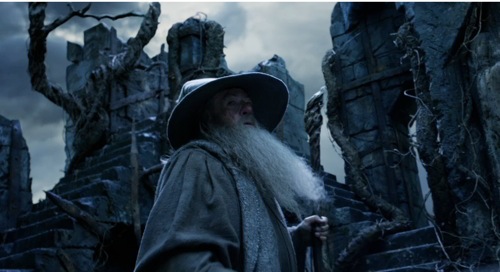 What we do get right at the very end is a tease of Gollum and his now iconic catch-word, a look at Gandalf doing battle with some devious creature and an introduction to the many dwarves that will accompany Bilbo on his journey. Martin Freeman seems perfectly cast as the adventurous hobbit and the trailer also hints that Ian Holm will return as old Bilbo to bookend the fable, as will "Rings" star Elijah Wood and undoubtedly others, however briefly. Not to gush at such a basic look, but this inaugural peek is pulled together by a hauntingly beautiful ballad that is sung by the aforementioned dwarves. It's an all-in-all tantalizing tease for what we’ll be getting Christmas of next year.

After the six minutes of mind-blowing action work that was The Dark Knight Rises prologue, a trailer just seems meek in comparison, don't ya think? Well, yes and no as we do get a first look at the batwing (or whatever they’re calling it) Catwoman, and hints at where the plot of this film will be going (which include the potential firing of Gordon and a mammoth prison break). The coup de gras would have to be the obliteration of a football stadium field (courtesy of Bane of course) with the just-victorious receiver (actually Pittsburgh Steelers wideout Hines Ward) reaching the endzone just to turn and see a smouldering crater. If anything, this second clip is just an extended teaser as there is still really no narrative structure revealed, but if Bane ominously promising Bruce Wayne “when Gotham is in ashes, you have my permission to die” doesn’t get all sorts of juices flowing, you had better check your pulse.

Wrath of the Titans

Wraths and clashes and CGI bashes, everyone loves to see an armor-clad heartthrob pummel mythical beats. Or at least that’s what Warner Bros. figured after it greenlit a sequel to the international smash that was Clash of the Titans. A different director (Jonathon Liebesman of Battle: Los Angeles fame) coupled with the return of class-acts Liam Neeson and Ralph Fiennes does make a case that this installment will be an improvement over its predecessor. Frankly, the inclusion of actual titans (which were nowhere to be scene in the original) just reminds me of Immortals and though I do not think this is an intentional copy, it’s impossible not to think of a retread. Any number of wacky beasts and bladed skirmishes are promised, but until I see a bit more story-wise, along with the quality of the graphics fully unveiled, I pause at taking up arms in favor of “Wrath.”

Forget the beanstalk and bring on the giant-killers! Director Bryan Singer is back behind the camera with his big-budget interpretation of Jack the Giant Killer, a British fairy tale by the same author as the classic fairytale Jack and the Bean Stalk. In this fable, an uneasy truce between giants and man is breached when those pesky magic beans send a princess to the heavens and Jack must venture up to save her ... must have been a Monday. The cast includes bigger names such as Ewan McGregor and Ian McShane (though they are absent from the trailer) and up-and-comer Nicolas Hoult from this years X-Men: First Class as the titular slayer. For a movie that was not on my radar in any way, this one had me quote excited with its impressive effects and darker spin on the novel. Hopefully it can stand above the glut of fairytale reimaginings that come out next year.