Like the egg of a three-toed snabble-de-frax, we have a treat this week, it’s the fabled Lorax.
Whether live-action or drawn, star-studded or not, all Dr. Seuss books are loved quite a lot.
Back in the late '80s, it lit up television, now Jonah and Channing give a comic revision.
’s the name, a red band trailer we’ve got, yet another remake, but I laughed quite a lot.
Then creepy ParaNorman of stop-motion fame, like Coraline before, kids call mommy’s name.
Last but not least haunted thrills by the ton, The Innkeepers promises low-budget fun.
When it comes to hot trailers, PA is no slacker, we’ve got animation and laughs – it’s Trailer Tracker.

Thankfully going the route that (as least one adaptation has indicated) seems to better suit the source material, an adaptation of Dr. Seuss’ beloved cautionary tale The Lorax will come to the big screen in a colorful 3D adaptation. Horton Hears a Who! used a strong voice cast and snappy animation to bring another popular work to life in 2008, while 2000’s and 2003’s The Grinch and The Cat in the Hat respectively went for live-action offerings and were met with middling results. The voice cast is an eclectic one from Illumination Entertainment (Despicable Me), including Danny DeVito as the titular moustached creature, Ed Helms as The Once-ler and Zach Efron as a boy named Ted. 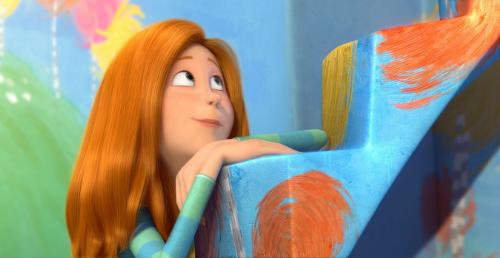 With the weightier subject matter in The Lorax, which explores themes of environmentalism, greed and capitalism, the trailer seems to indicate a simple-minded (if gorgeously rendered) adaptation more for the young audience than the entire family as is the case with certain Pixar products. But as far as animation is concerned, Illumination has yet to do wrong as Despicable Me was a hit with critics and grossed a whopping $250 million domestically. Though certainly slapstick-laden, that debut effort was truly warm-hearted and featured a number of laugh-out-loud sequences and one-liners. The Lorax chops its way into theaters Mar. 2 , so we have plenty of time to see if subsequent reveals will hint at the movie for which this critic yearns.

The trend of remaking semi-popular television series continues with 21 Jump Street, which gets a comedic re-work thanks to a screenplay from Jonah Hill (who also stars), Michael Bacall (Scott Pilgrim vs. the World) and Cloudy with a Chance of Meatballs directors Chris Miller and Phil Lord. Rounding out the main duo is Channing Tatum, a meathead who partners with the brainy Schmidt (Hill) to bring down a drug ring at a high school. The lengthy red-band clip we have for you today is of the damn funny variety if you ask me, as though Hill is known exclusively for comedy, Tatum scores some guffaws as well – he stole scenes in the very mixed bag that was The Dilemma. Slimmed down and ready to take on some action scenes is Jonah Hill (and looking less creepy here than he has in recent press photos I might add) time will tell if this formerly pudgy leading man is still as hilarious while on Atkins.

No activity to be found here, just a gorgeously rendered stop-motion fable in the vein of A Nightmare Before Christmas and Coraline about a young boy (aptly named Norman) who can communicate with the dead. Unlike I’ve seen before, ParaNorman seems to almost strive for true horror movie roots and not just a creepy kids film. A great number of scenes impressed me as a desensitized horror fan, so I fear what this could do to an unlucky young-un’. This intricately constructed fable comes from Laika, a multi-media studio that so far has exclusively dabbled in stop motion with its debut feature film, the aforementioned Coraline. Casey Affleck, Kodi Smit-McPhee, John Goodman, Leslie Mann and Anna Kendrick comprise the principle cast for ParaNorman, which will cap off summer 2012 on Aug. 17.

On the eve of its closure, The Yankee Pedlar Inn may have its highest occupancy ever – though nobody is alive. The proprietor Claire (Sara Paxton) hosts a ghost hunt, intent on proving that a historic murder has in fact led to a haunting. The Innkeepers comes from director Ti West, who helmed the gem of a throwback horror flick House of the Devil in 2009. He has been behind a slew of acclaimed but little-seen movies of the genre and this seems to provide the same number of scares (but nostalgic tone) that has made his films unique over the past decade. Who knows when this movie will be released – if ever –  but for what it promises, I will seek it out whenever possible.