"The bloated mass of a franchise limbers on"
By: Kieran Freemantle | Movie Reviews | June 25, 2017
It's that time again where critics around the world sharpen their knives and begin writing scathing reviews about the latest Transformers film whilst making no dent in the franchise's box-office. However, even by the standards of the Transformers franchise Transformers: The Last Knight is an uninspired entry. Since Optimus Prime (Peter Cullen) left Earth to find the creators of the Transformers, more Autobots and Decepticons have been crashing into Earth and doing battle in major cities. As a response governments around the world order all Transformers to be hunted down through the Transformers Reaction Force (TRF) - except in Cuba. Cade Yeager (Mark Wahlberg) is now a fugitive and when in the ruins of Chicago an old Transformer gives him the Talisman - an artifact that shows Yeager is the knight destined to save the world. 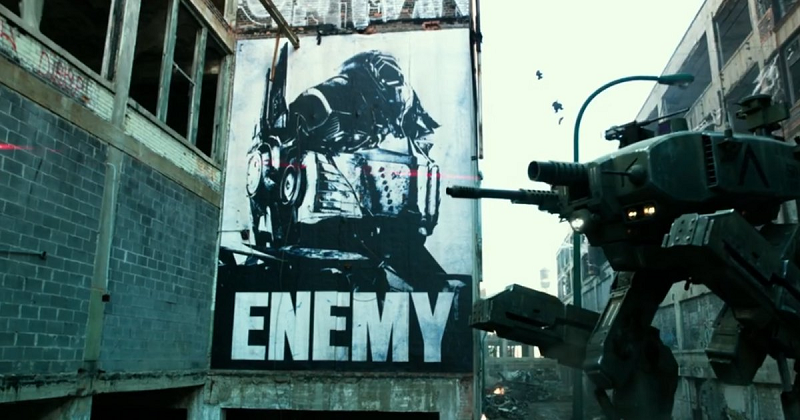 Around the globe mysterious horns start growing out of the ground and the ruins of Cybertron are approaching Earth. With only three days to save the Earth the keeper of the secret history of Transformers, Sir Edmund Burton (Anthony Hopkins) seeks out Yeager and Viviane Wembly (Laura Haddock), a Professor at the University of Oxford, so they can find Merlin's staff. The plot for the previous live-action Transformers can be summed up like this: there is an ancient artifact from Earth's past and the Autobots need to get it before the Decepticons can. The Last Knight doesn't deviate from this model. From such a simple set up in the 2007 movie the Transformers franchise has morphed into one of the most convoluted film series around - the former Youtuber Mat Williams AKA Welshy even pointed this out with plot holes in the first three films - where the Transformers have to find the Allspark, based on the planet that already has a sun harvester and the pillars that could bring Cybertron through a portal to replace Earth. This is a franchise that has to resurrect Megatron TWICE. 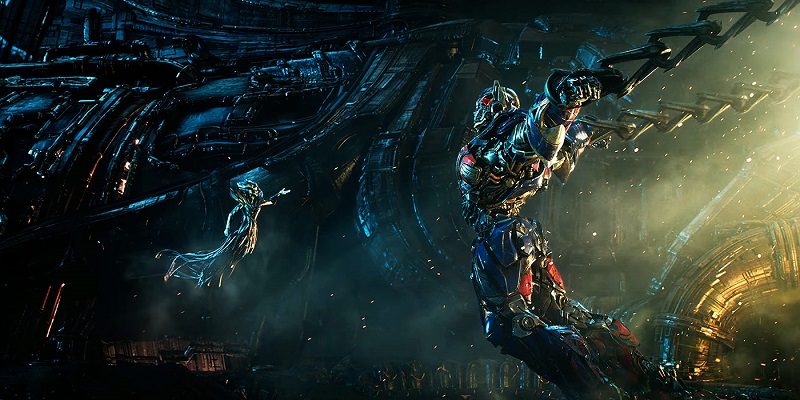 As a series Transformers has been inconsistent. Compared to other franchises like the Marvel Cinematic Universe, the DCEU and Star Wars which have a long term plan and tight control from the producers, Transformers has a more play-it-by-ear approach. This is fine because it can allow for a more organic approach to storytelling but only if the people involved care. And now Paramount has ambitions for turning Transformers into a cinematic universe and has Akiva Goldsman heading a 'brain trust' of writers that included Zak Penn, Jeff Pinkner and Robert Kirkman (although Kirkman has now left). To be fair to The Last Knight, there was a concerted effort to actually follow up on some of the plot points in Age of Extinction - namely Optimus Prime looking for the creators of the Transformers and why they wanted to capture Optimus, as well as showing why Transformers and Humans share the same iconography regarding medieval knights. However, when The Last Knight is considered with the other films in terms of the continuity of the series, then it raises many questions because it reintroduces characters like William Lennox (Josh Duhamel) and General Morshower (Glenn Moschower) - who should know better than to hunt the Autobots and trust the Decepticons. This is a series where humanity has disowned the Autobots three times and in this film the American government negotiates with Megatron regarding the release of Decepticons in a painfully unfunny scene. If humanity is this stupid, then the species deserves to be enslaved.

The Last Knight is the first film since the first Transformers where Ehren Kruger has not been involved with the writing process. Iron Man writers Art Marcum and Matt Holloway along with Ken Nolan (Black Hawk Down) have taken the scripting duties. They have tied the continuity of the trilogy including previous films with the Age of Extinction and Last Knight whilst ignoring some of the internal logic of the series. The Decepticons presence in the film is a case of studio mandate rather than serving any narrative purpose. They could have been written out of the film and it wouldn't have made a difference to the plot since they only ally themselves with the TRF in the first act and work as henchmen in the third. The film could have been sped up its plot by having Yeager explore the ruins of Chicago, finding the dying Transformer who gives him the talisman and after establishing what his new life is like before getting his call to adventure from Cogman. Boom. That's 20 minutes of fat removed: it's basic screenwriting. When it was revealed how Stonehenge is a focal point as to why Cybertron was heading towards Earth it was like in the American Dad episode "Ninety North, Zero West". One of the smartest moves in Age of Extinction was to have a cast cull, reducing the number of Autobacs down to five, all were recognizable and had some personality. The Last Knight has a cast explosion, increasing the number of human and robot characters. Newcomers include Izabella (Isabela Moner) and Jimmy (Jerrod Carmichael) whose roles can be described as hothead Latina teenager and nerdy black guy and could have been cut out of the film. The introduction of the Decepticons may as well have a caption saying 'toys now available in stores!' Laura Haddock is basically the 'hot totty' of the film and whilst she doesn't have to wear short skirts or shorts like other female characters in the series, she makes up for it with tightly fitted clothes. Haddock was on the receiving end of most of Bay's notorious love for sexual humor.

On the topic of sex humor, one of the reasons Yeager is the chosen hero is because he hasn't had sex for a very long time. This is the mindset of Michael Bay. The Last Knight is most comparable to Revenge of the Fallen which any film fan will know is not a comparison you want to hear. The Last Knight doesn't have the racist humor and stereotypes or as annoying characters of Revenge of the Fallen, so that prevents The Last Knight being the worst Transformers movie, but it's not far off. The Last Knight repeats the same mistakes as Revenge of the Fallen - both have simple plots that are overly complicated and rambling: both have unnecessary long runtime and there is a lack of Transformers action in the middle act. Optimus is held captive by the Quintessa (Gemma Chan) and the leader of the Autobots only has an active role in the third act and like the Fallen, Quintessa is a distant villain who hardly drives the plot forward - although it is great to see Humans star Gemma Chan having a role in a major Hollywood movie. There is plenty of Transformers action in the first and third acts but during the bulk of the film the only Transformers are Bumblebee, Burton's robot butler Cogman (Jim Carter) and the French-accented Hot Rod (Omar Sy) - and the action scene they were involved in were car chases and adventuring into archaeological sites. Audiences want to see the giant robots smashing the hell out of each other. 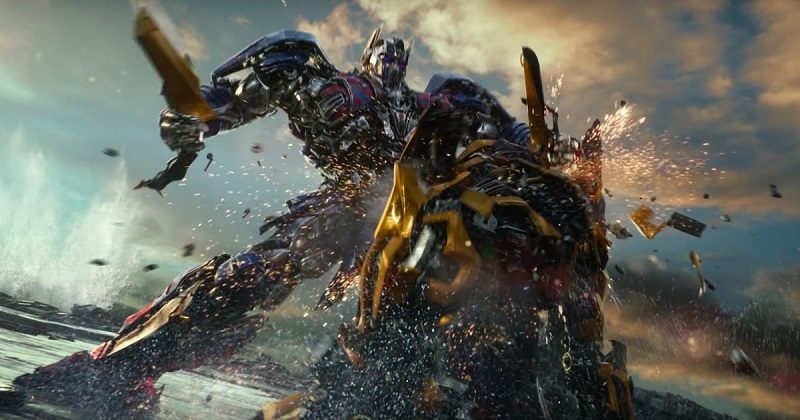 I do have a soft spot for the action in the Transformers movies: even the Revenge of the Fallen has the forest fight with Optimus delivering an epic line. Seeing Optimus flying with a rocket pack or fighting a robot dinosaur appeals to the 10-year-old in me. But the action in The Last Knight felt like Michael Bay was phoning it in. The special effects are still top notch, yet there weren't as many memorable action sequences. The final battle was too reminiscent to the Battle of Egypt in Revenge of the Fallen where it was just footage of soldiers firing guns at hunks of metal in the distance. The best moment was the prologue in Dark Age England where King Arthur's forces are hugely outnumbered: it was basically what Lord of the Rings, Game of Thrones or Vikings would have looked like if they were directed by Bay. It's admirable how earnest the actors were in their roles. One of the selling points of The Last Knight is it was filmed with IMAX 3D cameras, to give audiences more bang for the buck. Yet it got incredibly distracting when the aspect ratio kept changing during the action sequences.

As an Englishman, the inaccuracies are humorous. In the short space of time a car is able to drive from Oxford to Dover which should take two hours 30 minutes and later drive into Central London which is another two-hour drive. Errors in geography are a stable of the Transformers franchise as residents of Washington D.C., Chicago and Egypt can attest to. There was also a mention that MI6 was trying to arrest Yeager, Burton and Viviane: MI6 is a foreign intelligence agency of the UK, MI5 handles domestic threats. The Last Knight was also met with a minor controversy in the UK because Blenheim Palace, Winston Churchill's birthplace was turned into a Nazi headquarters and the scene was so fleeting it leads to the question why did the filmmakers even bother. On a more pleasant note, there are a few shots of Anthony Hopkins walking Freya the Staffordshire Bull-Terrier - a dog that was dubbed Britain's loneliest dog because of epilepsy and is now Bay's pet. The Last Knight is one only for the fans of the series: there isn't even the same level of spectacle that the other Transformers movies have provided.  At least it's not Revenge of the Fallen.
Rating
4.0
Pros