By: Justin Moody | Uncategorized | June 30, 2010
For well over twenty years, Transformers has permeated our pop culture in ways few things have. Several successful cartoon series, a successful movie franchise, and the action figures that started it all still fly off the store shelves. The one place that Transformers has lacked proper representation though has been in video game format. Until now.

Transformers: War for Cybertron is a look back at why the robots in disguise that we all know and love were forced to leave their home planet of Cybertron and take to the stars before their fateful landing on Earth. Starting off as Megatron and his band of evil Decepticons, you are left searching for a weapon to turn the tide of war in your favor in order to rout the Autobots and claim Cybertron for yourself.

Left to grasping at legends, Megatron invades an Autobot space station that was supposed to manufacture an unstable element only known as "Dark Energon". Megatron feels if the legends are true and he can harness this element, he could strike at Cybertron's core and take over the planet in one fell swoop. After recruiting former Autobot Starscream into his ranks, Megatron begins claiming the station for himself and soon his plans for global domination are under way. 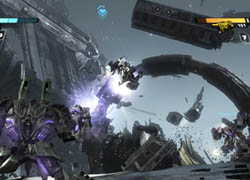 It's at this point, with Cybertron completely under siege, that you take over as Optimus and his band of Autobots in an attempt to thwart Megatron's grand plans for dominance. Only by Optimus embracing his destiny and taking the reigns of Autobot leadership can the Autobots overcome Megatron and attempt to save their home planet before this ages old war wipes out both Autobot and Decepticon alike.

The first thing that fans will notice right off the bat is these are not the movie Transformers. These are the cartoon and action figures that we grew up with. Megatron transforms into his classic white and purple tank form, Bumblebee is not a Camaro, and Soundwave comes along with Rumble, Frenzy, and Laserbeak in tow.

You'll then notice the great control scheme and third-person shooter action. Finding the balance between your vehicle form and your robot form is a fun challenge as both have their positives and negatives and the game forces to you to use both on different occasions and is a brilliant way to build in gameplay variety. And that's not the only balance you have to find. The Decepticon and Autobot campaigns are so different that you'll find yourself feeling like you're playing two different games altogether.

There are some flaws with the gameplay though. The lack of a duck and cover mechanism is the first and most obvious problem. Although there is plenty of cover to hide behind, not being able to hug it and fire around corners or even duck to fit in behind smaller crates makes some of the firefights you get into a lot harder than they need to be. 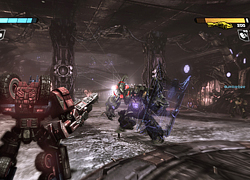 Another problem is the enemy A.I. Some of the lower enemies you have to face in this game redefine the term "cannon fodder", but at least the boss battles are epic. In this vein, although the game is compelling and pulls you in, with most enemies having a relatively low A.I., you should be able to blow through this game in about 10 hours, even on hard mode.

These flaws in gameplay though are more than made up for in other areas. The graphics for this game are flawless. From the seamless transformations of each character with their classic cartoon designs to every piece of Cybertron, this game's look shines like Energon crystals. When you combine this with a spectacular voice cast spearheaded by Peter Cullen returning as Optimus Prime, it's almost second to none.

Possibly the best feature of this entire game though is the multiplayer. Of course, almost any shooter nowadays has to have a "Horde" style mode a la Gears of War and Transformers: War for Cybertron provides that with its "Escalation" mode. Your typical Deathmatch and Capture the Flag modes really steal the show though as they're done in the Call of Duty style (no surprise being an Activision game; if something isn't broken don't fix it) and you just hope the Transformers fans truly will appreciate this.

Beyond some minor flaws, the game really sparkles while setting a new standard for what a Transformers game should be and completely rejuvenating this gaming franchise. Good gameplay coupled with a top-notch multiplayer and some pretty graphics makes this game a must have for Transformers fans old and new alike.
Rating
9.0