John Byrne was one of the most successful comic book artists of the 1980s. Much of the "classic" Uncanny X-Men written by Chris Claremont was illustrated by Byrne. He had a beloved run on Fantastic Four. He launched the Canadian super team Alpha Flight. When DC Comics was looking for someone to re-launch Superman in the mid-1980s, they picked Byrne to write and draw the series. Eventually, Byrne moved away from the Big Two but has still created comics on a regular basis for the last twenty years. Though Byrne ranks as one of my favorite comic book artists ever, I have not kept up with his work since he left Marvel and DC, so I wanted to check out Triple Helix #1, a new series published by IDW. The issue is very much a throwback to Byrne's heyday, and that is both a good and bad thing.

Although Triple Helix is a new series, it's a continuation of characters that Byrne established in the concluded series Trio except that those characters – officially named One, Two and Three – are now background characters. It's an interesting maneuver in one sense, to take a group of characters and develop their universe before shifting focus onto other characters in that universe. Byrne chooses to start the story "already in progress" rather than slowly build an origin story. It's not a bad choice. Although there is some confusion if you've never read Trio because then you are basically introduced to nine new superheroes in one issue. The central group here is called Triple Helix, made up of characters called Cataclysm, Javelin, Apex, Dart and Pylon, and they mistake a recently-changed member of Trio for a villain (as do the other two members of Trio). There's also a German villain named Golgotha. 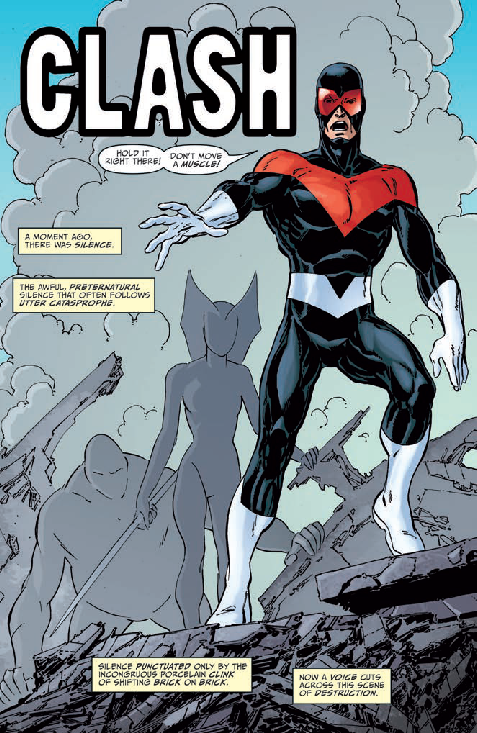 Despite a large number of characters, this is a pretty simple issue. The plot is not much more involved than what's laid out in the previous paragraph. That isn't in itself a bad thing, but the dialog in this issue is very dated. Triple Helix features wise-cracking heroes and monologuing villains in a way that would have felt old-fashioned in 1985. Here are a few random lines of dialog: "He's pure nasty with a German accent!" "How better to introduce myself... than by killing you?" "I've got to go! The rest of the team is in trouble!"

The plot is so basic and the dialog so on the nose that it's almost as if the comic book were actually being aimed at 8-year-olds, though I don't think that's really the idea. Initially, I also wondered if this were a satire or tongue-in-cheek, but there's not a lot of indication of that, either. The only real humor is through the snappy comments from the heroes. Rather, I think this is one of those comics that is entirely retro. It's like it's been stuck in a time warp and somehow a comic from 1972 is just being printing now in 2013. 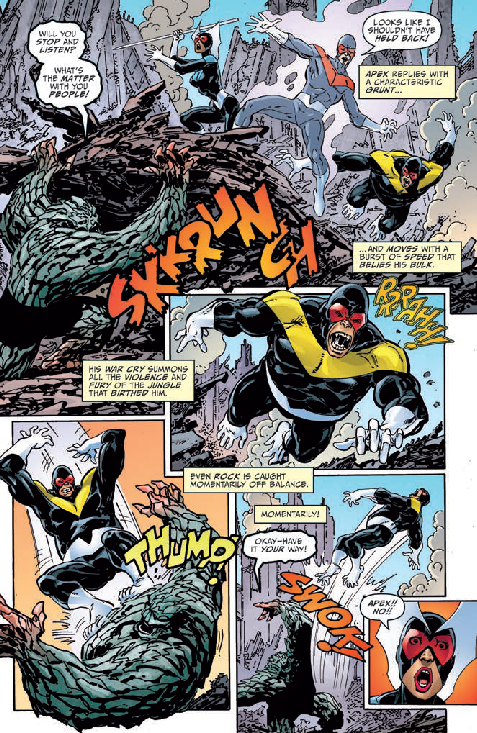 Mostly, the retro elements of this book are a detriment. It's possible that this book could work if Byrne had some radically new take on superheroes. Instead, this feels like slightly changed versions of characters from Byrne's past. Trio feels like a version of the Fantastic Four and Triple Helix feels the X-Men (Pylon is a Colossus clone and the Triple Helix costumes are pretty similar to the original X-Factor designs). 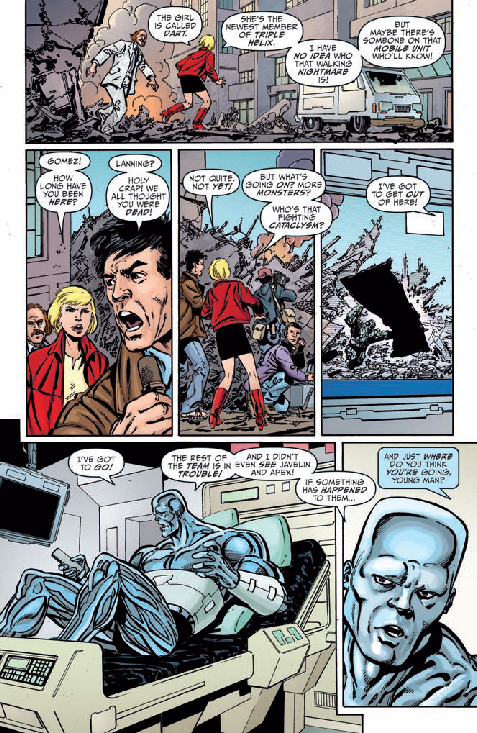 Still, the out-of-its-time tone of this book is actually SO different from everything else on the market that it does make it stand out. I wouldn't call the book refreshing, but it does have a carefree and simple element that could make it fun. If the dialog wasn't so call-attention-to-itself bad, there are some elements to Triple Helix that could make it worth a quick, change-of-pace read. Byrne's artwork is still pretty sharp, though it does hit you over the head with the character expressions (there's nothing subtle about this book). His style is still quite similar to his earlier work, so it looks good overall. I will also say that there's a twist in the battle with Golgotha that I did not see coming, one that took the story in an unexpected direction.

If you've been reading Trio or Next Men, Triple Helix may make total sense to you. If you're a huge fan of classic comics and dislike the dark, realistic tone of today's industry, you might also enjoy Triple Helix. It's possible that the title could sharpen into something enjoyable, but right now Triple Helix feels too dated for most readers to get totally immersed in.