By: Justin Moody | Xbox 360 Reviews | August 14, 2012
Mad Catz has always been one of my favorite companies for gaming peripherals (second only to Logitech). For over 10 years, I've enjoyed their controllers, flight sticks, and even the keyboard I'm using to type this review. That's why I was very excited when I heard last year that Tritton, Mad Catz' headset division, was making a fully wireless, 7.1 surround sound headset for the Xbox 360 dubbed the Tritton Warhead. Thanks to Mad Catz, I received one of these bad boys a few days ago to give it the full playtest.

Most headsets that are exclusive to the Xbox 360 only come with a standard red and white stereo adapter, with the option of purchasing a pricey add-on to experience full surround sound. Tritton however doesn't cut any corners in the packaging. Inside you will find every cable needed to suit whatever setup solution you require. Whether you have an Xbox 360 from the first series, the upgraded HDMI model, or the new "S" series, you have the choice of any applicable configuration for Digital Optical out or regular red and white stereo, depending on your TV. Tritton has made sure that any materials you need are included, as well as a set of AC plug adapters for different countries and a helpful quick start guide to get you up and running in about three to five minutes. 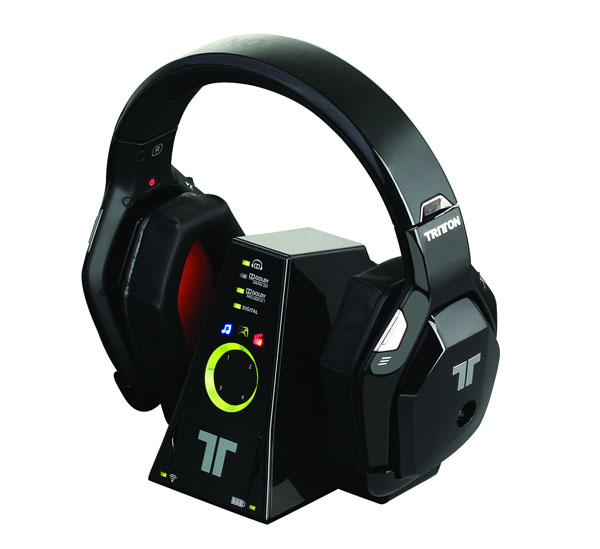 The Warhead is very stylish, featuring a full glossy finish with its signature black and orange colors with chrome highlights. Although it has very soft padding around the ear cups and headband, the comfort factor can differ from person to person. Those with larger heads should take caution, as there was a lot of pressure against the sides of the head, making it difficult to wear the headset for longer than 30 minutes without moderate discomfort. Overall, the earcups are very wide to accomodate most ear sizes. Even without audio playing, the headset does a great job of almost completely removing outside sounds. Its performance at noise reduction feels equal to if not better than high-grade firearm ear protection, although we don't recommend taking this out to the shooting range.

One of its biggest features is being a fully licensed Xbox 360 headset, allowing direct wireless chat communication without needing a cable connected to the controller, as well as displaying battery information on the console's dashboard. It should also be noted that because of the wireless voice chat being utilized by Microsoft's security chip, the headset cannot be used on any other system for voice communication. The voice chat was very clear on both ends during testing and thanks to the Selectable Voice Monitoring (SVM) Button, you can toggle whether or not to hear your own voice. Various other buttons are included such as a mic mute, audio input switcher, equalizer, power and sync. Voice chat and game volumes are also easily adjustable via two individual controls on the side of the ear cups. While the controls are easy to use, it's somewhat confusing what equalizer mode you are currently on (music, game, movie, or stereo) without looking at the base, which might not easily be seen depending on your setup. The headset connects to the console via 5.8Ghz wireless technology, preventing unwanted interference, and providing crystal-clear, uncompressed audio.

Also included is a matching base, complete with a fully lighted display to identify which player is using a headset, as well as the selected equalizer mode and input. Another great addition to the Tritton Warhead is its dual battery feature. One battery can be used in the headset, while the other can remain in the base for charging, allowing for long-term gaming sessions with minimal interruption. Retrieving the battery from either device can be tricky. Both the base and headset use magnetic doors to reduce the wear and tear that a conventional clip would have, but the batteries are somewhat annoying to remove from either component. The headset requires a tough fingernail or using the magnetic door to pry it out, while the base uses a spring-loaded holder with a release small enough to make sliding it nearly impossible without the battery shooting directly at the knuckle of your finger and causing some minor pain.


The sound quality is above-average, but has some issues that can really affect gameplay. If you're looking for a headset with a lot of bass, look no further. This thing produces a lot of clear and loud lows thanks to it's precision-tuned 50mm speakers with high-grade neodymium magnets. However, unless you switch your equalizer to the flat, stereo-only mode, the bass absolutely floods your mid and treble sounds. I first tested the Warhead playing some very intense games like Battlefield 3, Gears of War 3, and Call of Duty: Black Ops. With each game, the sounds of ambient gunfire and explosions overwhelmed the higher-level sounds such as dialogue and nearby enemy shooting.

Because of the level of the bass, I could not tell what direction a nearby enemy's gunfire came from. It felt like the shots were coming from directly in front of me rather than my left, which would cause you to lose quite a bit in a multiplayer match. Only when the sound was switched from surround to stereo or when there wasn't a lot of explosions was the bass quiet enough to give me a sense of direction with all the different noises. To also make sure it wasn't the fault of the console, I connected the headset directly to my gaming PC via an optical cable, but the outcome was unfortunately the same. What makes it worse is that there is no way to create a custom equalizer mode or modify one of the existing three to correct this issue. Watching movies and listening to music was more enloyable as it didn't rely on multi-directional sound, but the bass still has it's moments of over-powering the treble.

Trittion has created a sturdy, yet somewhat comfortable feel to it as well as pretty good sound quality. However, it also has its share of downsides, the biggest being its price. Currently you can purchase the Tritton Warhead for $299.99 at most major electronics stores, but with all the hype for this device, even with its full wireless capability and emulated 7.1 surround sound, does that justify spending so much? With a new Xbox potentially around the corner within the next year or two and competing consoles in development, it seems rather foolish to release their new headset exclusively on a platform nearly seven years old and with the same price of the console itself. I personally find it hard to believe a high volume of units will sell, but only time will tell whether the Tritton Warhead is a weapon of mass destruction, or just a dud.

Have any questions about the headset? Post your questions and comments below!