Skyrim seems to be a place of epic contrast. Extreme diversity of lifestyles are apparent through numerous cities, and some characters seem to live terribly troubled lives. Today, I met a girl in a small town, no older than six years of age. Upon introducing myself to her she says, “If you beat up my sister, I won’t tell”. I speak to her sister, who confides in me by saying she spends her time away from the house to avoid beatings from her sister and father.

This to me seemed like one hell of a troubled family. What’s the daughters answer to this? Does she confide in a higher source of power who could solve the problem or does she flee from the town? Neither. Instead, she decides to learn destruction magic to defend herself. Next time Father preps her for a beating, she’ll burn him alive by cannoning fireballs out of her hands. Sweet Justice

Head to the Companion guild in Whiterun and you’ll meet a guy named Brill. The thing about Brill is, he’s not that brill’ at all; he’s pretty shit. Whilst the rest of the Companions seem to be heading out on hunts and killing bandits, Brill is content on just getting absolutely hammered. “Sobriety is overrated” he says. This man is literally incapable of giving a single worry to anything around him. What’s amazing is the Companions don’t seem to care. They’ve apparently “rescued” him and set him up on a redemptive path of guzzling mead. Heroes. 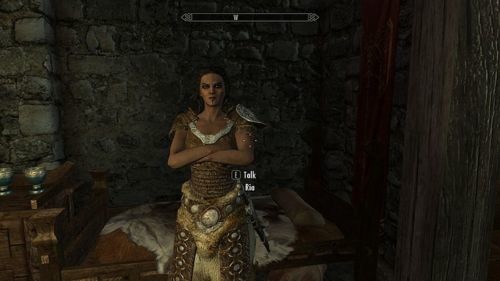 Outside the guild's headquarters resides a woman named Ria. She boasts the achievement of coming in second place for being the most incompetent member of the Companions. Fighting with the Companions gave me the impression that they’re a bunch of fearless bastards. I’ve seen them take down dragons, so what trophies does Ria boast? “I killed a bear yesterday” she says rather smugly “Did you kill anything?”

Actually Ria, yes I did. I binned off two dragons with nothing more than a couple of arrows, cleared about five or six dungeons, then went on an imperial killing spree. So I’d say my body count’s at about two hundred today, love! Does she kill anything else? Ask her yourself. “I killed a bear yesterday, did you kill anything?” Ah, still on the bear killing Ria? Sweet, keep it up.

Sheogaroth is a Daedric Prince, and he’s literally out of his mind. I say literally, because triggering the quest “The Mind of Madness” sees you being transported inside the mind of a dead, mad Emperor, with Sheogorath providing you with tasks to do inside his head. The powerful Wabbajack staff is your reward for seeing the quest through, although the main reward in my opinion comes from the ramblings of the insane Prince. “Do you mind, I’m doing the fishstick. It’s a very delicate state of mind”. Not quite sure what the fishstick is, but I’m positive your mind is elsewhere. Before he leaves, he runs through a quick checklist of his inventory, only to realize he’s apparently lost his luggage. I wasn’t aware that Daedric Princes carry around luggage, but now I feel more at peace with the world for knowing so. 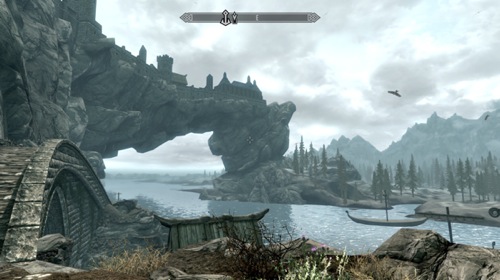 Head to Solitude and you’ll find a woman called “Gisli”. She seems to have very, very deep issues. If you try and talk to her, she’ll verbally attack you by assuming you’ve come to ridicule her like her sister does. If you just want to say hello to her, she’ll make sure to strike “tick off a random stranger” from her list of daily tasks. Completely unnecessary reply to be honest with you Gisli, I’m not quite sure if I like your attitude. Pickpocket her and ruin the bitch.

The Blacksmith in Solitude, Irnskar, looks like one of “those guys”. You know, the ones that just won't give you eye contact in public to avoid the high chance of a fist fight for no apparent reason. His appearance is fitting – “When I was a young rascal, I broke a man’s arm with a single punch. Of course, I had a horse shoe hidden in my glove”. “Young rascal” makes the whole event seem just like an everyday practical prank, which to Irnskar it probably was. If breaking someone’s arm with the equivalent of a medieval knuckleduster is his idea of casual, young mischief, then I wouldn’t want to cross him on a bad day.