True Blood – Everything is Broken

The gloves have been decisively removed tonight and if the start of the season saw the narrative crawl, Everything is Broken charges the defibrillator and sets undead pulses firmly racing again.  With one of the most explosive ends to an episode since... well ever, the True Blood Universe has been expanded, as Russell Edgington’s fury is unleashed on the world stage.

The episode begins with a new take on the Hitchcockian shower scene, with bloody plugholes being juxtaposed with sexually charged caressing, eloquently summarising the Bill/Sookie relationship thus far. We see Sookie confronting her Vampire lover about the file he has collated on her and the Stackhouse family and Bill is quick to defend himself, blaming his desire to protect her as his motivation. I’m unsure as to whether there is any more to this particular conspiracy as it has been left largely untouched so far and I am inclined to believe that there is little left to learn.

Eric is now on the run from Russell and has fled back to Fangtasia to find Pam. However, before they can escape to a human house for refuge, a Vampire strike force led by Nan Flanagan, the spokesperson for the Vampire League of America, arrives on the scene and locks the club down. Here we get one of the first glimpses of the infamous Authority, as they watch Eric being questioned via webcam. With nothing left to lose, Eric wastes no time in laying out the events that have led to this point. He explains his motivations for revenge and explains Russell’s intentions and reasons for destroying the Magister. There is an air of desperation in Eric’s eyes that we have never seen before and even when the Authority decide not to peruse the matter and allow the Viking Vampire to act out his revenge fantasy, it is clear that Eric has absolutely no idea what to do next.

Meanwhile, Russell is on the floor scraping together the bloody pulp that used to be his Husband Talbot. This is pretty grim even by True Blood standards but it’s a great way to show the King’s plummet into despair and insanity. We later see him on the roof of Fangtasia taking to Talbot’s innards, in what looks remarkably like something you would keep trifle in. His performance is utterly fantastic and makes you cringe and laugh in just the right amounts. 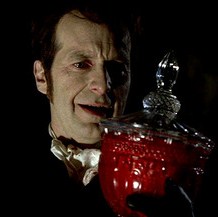 Bill takes a strange trip into hippyville, that strange garden of free-love and flower-power that Sookie arrived in during her coma. He speaks to the mysterious woman with the English accent and on attempting to bite her, is thrown away by the same burst of light that we have seen come from Sookie’s hands. Bill pleads with the woman to tell him what exactly Sookie is and although we are not made privy to the secret, it appears that next episode may reveal the extent of her powers.

Jason is still trying to protect Crystal, who is yet to reveal whether her family are indeed Werewolves, or if there is actually something a little more complicated taking place. Her fiancée has managed to track her down and with a little help from the butt of a rifle, they manage to knock him unconscious and tie him up. However, after they leave him by the side of a road and contact the police, it later becomes apparent that he breaks free and attacks the unwitting deputy that takes the call. When Crystal’s Father then catches up with her at Sam’s bar, a fight ensues which sees the shapeshifting Bar owner going uncharacteristically crazy; beating the suspected Werewolf within inches of his life. Finally, we see Sam grow a pair of hangers and it seems like he’s ready to release the quiet literal beast within.

But the highlight of the episode and one of the most memorable scenes in the show’s history begins with a seemingly mild news report, playing in the background of Nan Flanagan’s limo (also a lesbian – don’t ask me why most of the vampires are gay on this show, I’m not treading on that particular minefield). Without warning, Russell’s fist bursts through the chest of the news reporter, killing him instantly. He then proceeds to deliver an enraged monologue, in which he rejects all of the political correctness of the American Vampire League all the while still clutching a section of spinal cord. He instead explains that Vampires are not human’s equals using one of the greatest lines in television history: