The conclusion to True Blood’s third season contains a slew of grisly casualties, but the real victim is the finale itself. After an over ambitious narrative that has meandered in multiple directions, there is not time to wrap up loose ends and the final episode plays out like a teaser to next season, with only flashes of excitement.

Last week was another disappointment, but ended explosively with Russell and Eric lying in direct sunlight, seemingly seconds from death. Although there was no battle royal between the two most powerful vampires, the sequence of events was a satisfying twist in the story. If the season finale had concentrated on the drama within Fangtasia, then it would have provided an incredibly entertaining hour of television.

Eric has a change of heart after Godric appears before him as an apparition. After being dragged back into the protective darkness of the Vampire bar, he decides that the true death would be too merciful for the creature that killed his family over a millennia ago. Charred and in pieces, Russell tries to bargain with Sookie. After hearing his proposition, Sookie performs one of the most out of character sequences I think I have ever seen. Laughing like Jack Nicholson on a bad day, she empties the remains of Talbot into the garbage disposal and stands there defiant before the crispy King. I didn’t know whether to laugh or cringe watching the usually mild mannered blonde laughing like a badly acted serial killer. The behaviour was so inconsistent with her usual demeanour and her motivations so unclear that it just left me feeling confused and disconnected. 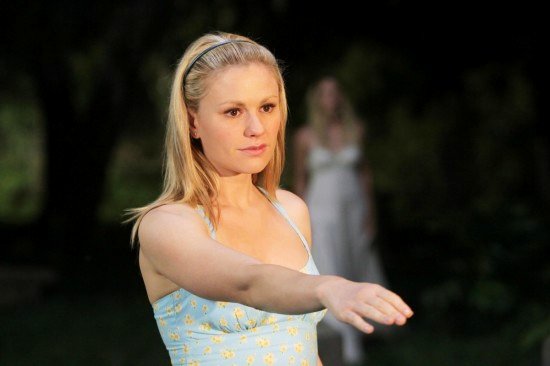 However, this section of the show was exciting and incredibly entertaining and should have been far more prominent than it actually was. Russell is incased in concrete (alive) and Bill tries the same with Eric, but without success. Unfortunately, the writers took the decision to saturate the episode with boring and unrelated events clearly aimed at setting up next season. We were forced to endure a good 15 minutes of Tara giving herself a haircut and performing her usual ‘hard done by’ routine. God I hope that this is the last we see of that character and her perpetually monotonous diatribe of self-pity.

Jason’s plot-line is actually one of the better ones in the finale, as he steps up and takes on the role of caretaker to the Werepantha people. Again it is entirely separate from the main story and yet another teaser for next season, but it does contain some depth that the audience can invest in and I hope this is developed further when the show returns.

Sam has come to the end of his violent and drunken rampage and is trying to build bridges with the people he berated the night before... that is until he realises Tommy has stolen the money from his safe (how did he manage to open it?) and then shoots his brother in the back. This is the second out of character moment in the episode. We were shown a glimpse of Sam’s past but it does not justify this schizophrenic behaviour, that sees the show’s ‘nice guy’ devolve into a cold-blooded murderer. 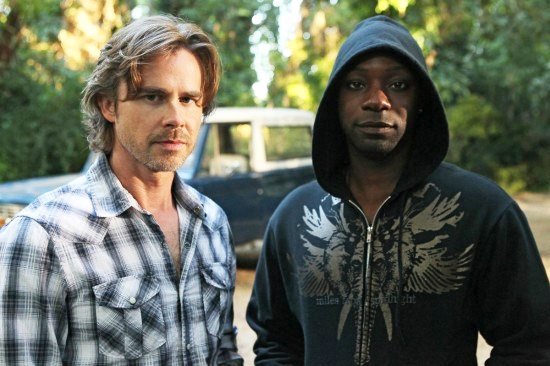 Hoyt has an intervention from his mother and ex-girlfriend, to get him to end his relationship with Jessica. But really, was it entirely necessary to sandwich this into the season finale? I don’t care that his mother doesn’t approve of his love life, or his desire to buy a new house; there is a 2,000 year old vampire burnt to a crisp and chained by the neck that deserves some attention! Furthermore, last week saw yet another new plotline branch off, in the form of Lafayette’s new sensitivity to hidden agendas and emotions, that are appearing in the form of frightening hallucinations. Jesus is a witch (not the one who wasn’t the Messiah, but a very naughty boy) and it’s clear that he has expedited Lafayette’s discovery of his supernatural power. This is all exciting stuff, but why was the choice made to force it into the already overcrowded narrative with just one episode to go?

Oh and the episode ends with Sookie going off with the fairies... literally.

My review has been overly harsh simply due to my disbelief at some of the missed opportunities and poor plot direction this season. With so many disconnected stories, it has been impossible to cover a single one adequately.  This is exacerbated by the fact that the first 5 episodes were incredibly slow paced and at direct contrast with the dizzying confusion of the last few.

I am aware that the show must follow the path set out by the books, but it must make a decision as to which plot line is the seasons focus and relegate the others to the sidelines, otherwise all we are left with is a snap shot montage of a bunch of monsters that keep doing bad stuff to each other. Bring back the social commentary, the global politics and the racial connotations. True Blood was once intelligent in its design and it can be again.