True Blood is like an incredibly convincing transvestite. On the outside it looks great and the teasing promise of a climactic event are incredibly exciting. However, when you get to the crunch, all you’re left with is a bunch of bits you didn’t ask for and a confusing moment when you decide whether or not to continue.

The episode explodes into action with Bill once again charging to Sookie’s rescue. If you remember from last week, Sookie, like a mildly disabled puppy, has wandered to Fangtasia to ask Eric some questions and ended chained up in his weird bondage dungeon. Pam is still around to cause a little grief, but if there is one thing we have come to expect from True Blood, it’s that a convenient method of escape will invariably appear. This comes in the form of the Eastern European stripper that Eric insulted last week, who releases Sookie and then helps restrain Pam with silver. Unfortunately, this initial explosion of excitement quickly fizzles out.

Sam has completely changed character and is now an angry drunk with a mouth like a dock worker. A little of this was explained to us last week, with some colourful flashbacks of an apparently murderous past. It’s just there doesn’t seem to be any major trigger event that has lead to this huge shift. So he’s had a crappy couple days but, Jesus, last season he was stabbed in the chest and killed a Minotaur she-devil. It was enjoyable to watch briefly, but was given far too much attention this late in the season.

Equally, we now have another completely new plot-line developing with Lafayette and Jesus (not the one whose face appears on dirty sheets and toast). After their V trip, Jesus wants more, whilst Lafayette is still experiencing hallucinations; some genuinely fear inducing, others like a mildly creepy version of the ‘Small, Small World’ ride at Disney Land. Clearly, Jesus has some bad Voodoo Mojo in his past; the problem lies in the fact that it isn’t interesting or necessary. We already have too many unwanted sub-plots, we certainly don’t need another to distract from Russell Edgington and his play for world domination.

Crystal is a Werepantha. Her explanation sums up my feelings for this development pretty well: “It’s like a Werewolf but just a Pantha... I’m a Werepantha”.  I’m not sure where the writers are going with any of Jason’s scenes tonight, they have almost no relation to the rest of the show and throughout his interactions with the performance-enhancing Quarter Back, I couldn’t help but think “who gives a shit?”  He goes to look for his missing sister and ends up at a high school football field... What? Then he goes home. 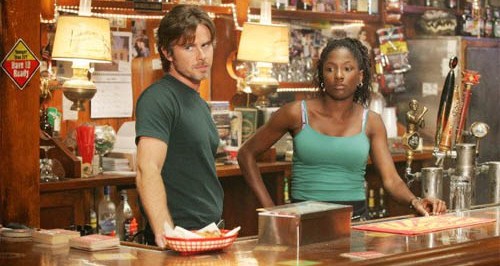 Arlene’s unwanted baby is another distracting side-plot, which again, has become totally separated from reality. She decides she would like an abortion, but instead of a quick trip to a clinic, goes into the woods with an odd woman she has only recently met. Holly performs a Wicker ritual, invoking the Earth mother to help Arlene miscarry...  all the while clutching a dagger. Now obviously Holly is not performing Wicker, my problem lies in the assumption that anyone, even the clinically insane, would choose this option instead of just going to a clinic. Vera Drake must be turning in her grave. Well, Arlene has a serious bleed in the night, much to her relief. However, it appears that the baby (?) is absolutely fine. I’m aware that the writers are trying to set themselves up for next season, but really, they had to do it now?

Right, back to the story we are really interested in. Eric confronts Russell and a battle seems imminent, as the ex-Viking reveals his motivation for motivation. Russell, still clutching his Talbot trifle, simply laughs off the explanation. But, Eric has one bargaining chip left which he plays without hesitation; Sookie’s delicious fairy blood. As Wesley Snipes proved, being able to ‘day-walk’ makes vampires awesome (and black?) and Russell find’s it impossible to refuse Eric’s proposition.

The two of them ambush Sookie and Bill and bring them right back to Fangtasia for a little field test. Fortunately for Sookie (must have a fairy god-mother), Eric and Bill hatch a plan to trick Russell into stepping into prolonged daylight (remember the blood’s effect last for a very short time). Eric lures him outside and handcuffs the King as soon as he realises the betrayal. It seems that this may be the end of both characters, although I imagine Eric will survive as he features prominently in the later books.

If the episode was simply the 15 minutes surrounding Bill, Sookie, Russell and Eric, then it would have been an excellent addition to the series. Unfortunately, it was diluted so heavily with the other sub-plots that it became a directionless mess of narratives all going their separate ways.

What happened to the Authority, Russell’s war on the human race and all of the Werewolves? With the season finale next episode, I still have no idea what it will be about, nor do I have any great urge to watch it. So many great storylines have worked themselves into a stalemate and with just an hour left before the season end, we have two or three entirely new plot-lines starting up, which are not just confusing, they are also damaging to the existing themes.

Right, I’m off to a dark night club to meet some very tall women with broad shoulders and massive hands...