True Blood – I Smell a Rat

Last week ended with one of the most explosive ends to any episode in the history of... ever. Russell Edgington ripped the spine from a news reporter live on air and basically declared war on the Human race. The latest episode fails to capitalize on this, but we do finally find out what the hell Sookie is.

Unfortunately, she turns out to be a fairy. Not really sure how to react to that since I find it pretty difficult to get excited about fairies (unless it’s Friday night at the Man Sandwich Bar). But at least we know now and although it is a deeply unsatisfactory explanation, it does answer the questions surrounding everyone’s fascination with the rather one-dimensional blonde. However, it also poses the rather obvious question of why the Chief Fairy (can’t believe I just wrote that) decided to divulge such a guarded secret to a Vampire; a species that tried to completely destroy them. I know Bill told her he would protect Sookie, but I recently found out that sometimes when people learn you are a fairy, they get angry because the Bible says it’s wrong. Needless-to-say, Sookie now knows that she is probably the offspring of a fairy rapist and will definitely not be wearing sequins for a while.

One major development was the inclusion of a back story for Sam. Since his outburst last week, audiences everywhere have been asking “where the hell did that come from”. To explain this sudden emergence of crazy Sam, we are treated to a selection of flashbacks that show Sam as a thief who is double-crossed by the woman he loves. This eventually leads him to murdering both the girl and her lover. I enjoyed these sequences, but it is extremely out of character for our mild mannered bar owner and skated the line of feeling forced. 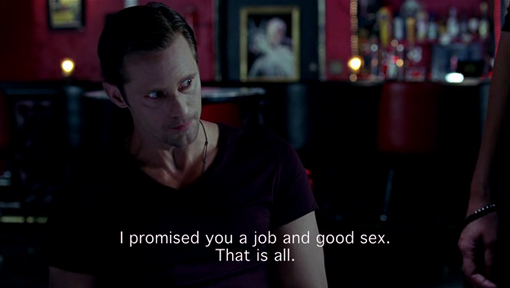 Eric is putting his affairs in order, much to the dismay of Pam, who just wants her Vampire daddy to stick around. But Russell is about 2,000 years older than Eric, so the ex-Viking is simply being realistic. However, Russell has business of another kind... a rent boy kind. But he’s not doing anything sordid, he’s only pretending the prostitute is Talbot, as he stabs him to death... you know, nothing weird or dirty. All of this is to solidify the perception of Russell as completely insane and unpredictable, but it was not the war we had been promised after the crescendo last week. This was what let the entire episode down. After the pace setting drama of the last episode, I Smell a Rat simply fails to deliver. The focus of the episode fell on all the characters that we had been led away for last week, like Jason, Lafayette and Arlene. This was obviously a catch-up mechanism, but it was frustrating and felt like an obstacle.

Lafayette is on a V trip with Jesus (not the one the Jews got ‘cross’ with) and they are sharing flashbacks of their similarly colourful family history. I don’t know, there’s something deeply cringe-worthy about watching people on drugs, especially when they keep going “Weeeee.. ooohhhh... ahhhhhh”. The sequence hinted at both characters having some form of supernatural connection, although this is still quite unclear and simply felt like another distraction.

A truly disappointing episode, which although filled with drama and intrigue, it simply wasn’t any of the drama or intrigue we have any interest in. Crystal was revealed as the Werewolf we knew she’d be (ok she’s a Werepanther but still...) and Jason told Tara about Eggs, which would have normally have been interesting developments, but it wasn’t Russell on a killing spree, which is all we really want to see at this point.