TV Show Renewals: The Good, The Bad, and The Ones That Should End

So it’s that time of year again when some TV fans rejoice and others sit nervously in the corner praying for some divine entity to save their favorite show. This year has seen some fairly shocking renewals on the major networks as well as some shows getting left out in the cold despite strong and loyal fan bases. So before I get into the shows that deserved their pick-ups and those that should just... well, end, here’s what has happened in the world of TV so far:

CBS - Two And A Half Men (technically renewed but the future of the show is uncertain post Charlie Sheen meltdown), The Big Bang Theory, How I Met Your Mother

Very few shows worth mentioning have actually been cancelled at this point in the calendar, instead it seems that many networks are waiting until after the seasons have ended, or at least longer than usual, to make their decisions. Those shows include:

Of the plethora of shows that have been renewed across the major networks and cable alike, there are a few standouts that are more than deserving of their returns to the small screen in the fall and/or next year and a few that we’d really be better off for seeing the back of.

After ending its intended run of five seasons under the creator and original show runner Erik Kripke, Supernatural was awarded a sixth season based on its fairly strong ratings for the little network that could, The CW. Getting off to a fairly shaky start, the show felt somewhat unfamiliar and nonsensical in the early episodes before finally finding its feet mid way through the season. Now towards the end of the sixth season, the story has become well and truly fleshed out and some of that early awkwardness is finally making tangible sense. With an Angel civil war coming to pass and Demons and Angels vying for control of the vast power of souls, the show has given itself new legs to run with and the genuine possibilities for the progression of the plot make its renewal much deserved.

After finally escaping the shadow of Lost when it finished in 2010, Fringe has more than become the newest show that people need to be talking about right now. Despite abysmally low viewing figures, the quality of the show has been getting stronger and stronger in the third season and shows no signs of letting up. With its season finale geared up to be beyond insane, the scope of the show for the fourth season is huge. As if universe ending wars weren’t enough, time travel is now an aspect and truly in the game. Fringe has stepped up to claim the medal for best cliffhanger television nearly every week it has aired this year. Although it looked like it was going to be the last hurrah for Fringe this year, the unlikely pick-up for the Friday night warrior was about the best piece of renewal news that this year has had to offer.

The first season of The Walking Dead wasn’t actually that good. So what makes it deserving of a renewal? Essentially the fact that you know that it can be great. The first episode was one of the best pilots of the year, the problem with the rest of the season was that it was simply too short to expand on anything. A solid amount of time was spent with the characters, as is necessary in the early stages of any new show, but after we got to know our survivors, there wasn’t too much surviving to be done in the remaining time of any given episode. With a longer second season, there is little doubt that this show won't find the balance it needs between love triangles and inventive ways to cut the heads off dead people. 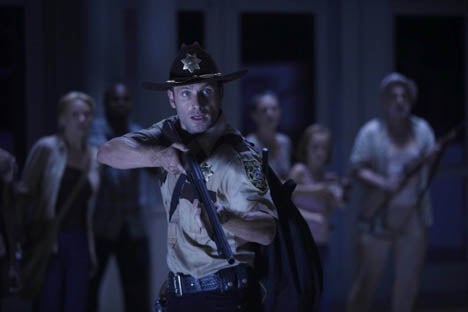 Sitting at the opposite end of the spectrum for me is House. Although neither officially renewed or cancelled yet, House’s viewing figures all but guarantee that the show will continue. Sadly, the quality of the show has fallen in its latest season and it’s beginning to feel like they’ve kind of run out of places to go with it. Early in its run House was a fresh take on the medical drama we’ve come to know and loathe and found a strong balance between genuine mystery and interesting characters. After the original team split, the formation of a new team brought life into the middle years of the show and the sixth season dealing with House’s insanity was more than tolerable. Now that all of that has happened, there is basically nothing left. There are only so many times that you can watch the same formula of: interesting symptoms, failed diagnosis, another failed diagnosis that seemed to be working, House epiphany, correct diagnosis. The show was great and even the seventh season hasn’t been terrible in trying to tread new ground with character relationships, but it would be better to end it now before it becomes completely boring and repetitive.

If you watch TV it's pretty much impossible to not have heard anything about what's going on with The Office lately. After seven seasons of the show, Steve Carell finally decided that he would be able to make a steady enough paycheck from feature films to leave the show once and for all. The sheer amount of names thrown into the mix about the replacement for the comedy giant aside, did anyone consider the possibility that the star leaving might indicate that it’s about time to pack it up? The show has kept its level of comedy fairly consistent throughout its run and there is no doubt that the writing is what makes it work, but if Will Ferrell or any other of the huge comedy stars rumored are the lead, then there is a huge possibility that it will become a one man show, which goes against what The Office is supposed to be about.

Feel free to express your opinion on which shows you'd like to end or come back in our comment section below.