In the last issue we found the Twilight Guardian bonding at a comic convention with likeminded heroes as they patrolled the streets together and formed an alliance. Of course once the con was over the Twilight Guardian was left alone again… that is until a comic book company offers to make a comic based off of her.

Back in her home town she settles back into her routine of a nightly patrol and reading comics in her underwear. This time she has something new to read instead of old comics. The company has sent her pages of a treatment for her comic. She settles in and reads a few pages that depict her as the Punisher. In the comic she enters a bar and shoots the crap out of everyone before blowing it up via her trained monkey in a helicopter.

She heads out on patrol and comes across some kids that are out way past bed time lighting firecrackers. Twilight tells them the importance of fire safety and feels it falling on deaf ears. She moves on when the Father of the kids comes out to collect them. The days go on and she receives another treatment for the comic book. This one is obviously mocking English writers to an extent and shows Twilight as more of an anti-hero pushing the envelope than anything else. 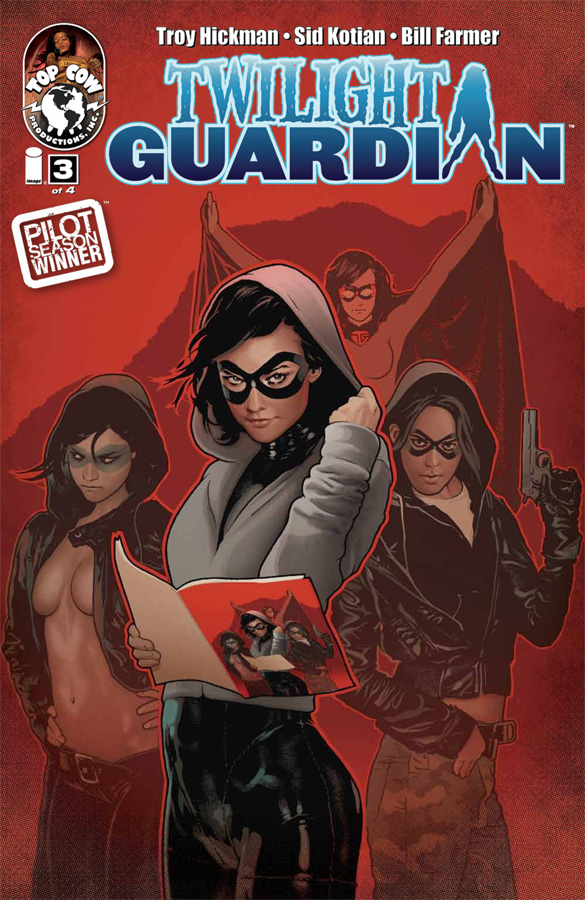 The next night on patrol she again runs into the strange man that stands outside of her self-imposed territory. Twilight does something daring as she runs across the street to find the man who has watched her for several weeks and may or not be the Dusk Devil. Whoever it is, they are familiar with her patrol patterns and territory. The last comic treatment arrives and it takes place within the company’s big cross over event. Again she's depicted as a murderer. After reading it Twilight shreds it up and throws it out obviously disappointed with what she’s read.

This issue is very good, but it does one thing different… it adds dialog. Up to this point none of the characters have talked. The entire story has been told through a very interesting narration from the point of the view of Pam aka the Twilight Guardian. It was one of the most amazing things about the first and second issue. With the introduction of dialog I hope that it won’t become the focal point of the next issue. I do think that the dialog transitioned the reader from a comic book to a real life situation. The dialog broke the fourth wall and put the reader into the world for the first time. It made the story feel real in a way it hasn’t before. I did find that interesting and powerful writing at the same time even if I wasn't a fan of it.

The story starts off grinding its own wheel which establishes the life that Pam leads, but then it changes directions and sprinkles in twists for the story. I enjoyed Troy Hickman’s tip of the hat towards other writers in the industry. If I had to fathom a guess I would say Garth Ennis, Mark Millar and Brian Michael Bendis, but I could be wrong. It was fun to see a different take on the same character even if it was the same person creating it.

The art is very consistent with the exception of the first few pages. Pam’s hair is massive in one panel and in general she looks a lot older than she's been portrayed. Otherwise the art by Sid Kotain is very good. Kotain does a great job of drawing not one, but four different styles throughout the comic book. Each style has his unique flair to it, but you can see his overall presence in each. His talent is to be commended as some artist struggle to reinvent their style and here is Kotain who has several at his dispossal. He really was the best choice for this series.

Personally I didn’t like the dialog edition. I enjoyed this series just being given to me from one side and forcing me to piece the truth together. What really made this series stand out was that it was all narration, but I think that it’s still a great issue that needs to be read; if anything just for the reveals throughout the story. One thing I did enjoy was the fact that the third issue sets up something very interesting for the next issues story and I will be waiting to see if it’s done with Narration or Dialog. If you enjoyed the first two issues then this is a must buy.