Welcome to Ultimate Comics Avengers 2 #1, the sole owner of the most uninspiring five pages in comic book history. The man responsible for those five pages... None other than comic book fans favorite 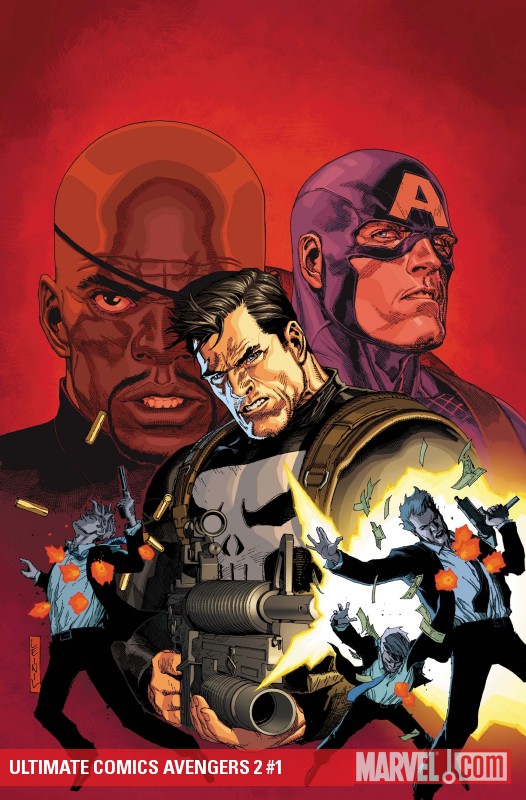 Mark Millar (Wanted, Kick Ass). Not only are the first five page devoid of all entertainment value, they're just flat out embarrassing.

The issue begins with the Punisher “getting busy”  with his guns that go “Choomf” (Millar's words not mine). Castle has been spending the last two months working his way through an Eastern European crime family all in the hunt for their local boss, Joseph Petrenko, a.k.a. Russia's Red Hammer. Petrenko runs one of the largest human trafficking outfits in the country. Castle's opportunity finally arrives to take Petrenko out. He learns the hard way that S.H.E.I.L.D has caught up with him using the ol' bait and switch. No Red Hammer, just a red face courtesy of Captain America. Once in custody, Nick Fury and Black Widow make Castle an offer he can't refuse: A stint on death row or working with them in S.H.E.I.L.D's new black ops program. He should have gone with death row! They do the jobs that Captain America and his friends would balk at...hence the reason they're looking for a Captain America of their own.

There's a feel and a look that accompanies an Ultimate book when you first open it. Be it with the story or the art, you know you're reading a book from the Ultimate line. Never with Leinil Yu’s (Superman: Birthright, Secret Invasion) art would you think it was out of place and stiff. But it is. It feels as if the story has somehow held back the art. It has made it just that… Stiff and lifeless. Along with the colors by Laura Martin (Secret Invasion, War Is Hell), everything just looks bland and dull. She uses dark reds, oranges and browns through almost every panel.

The before mentioned first five pages raise the red flags for this issue. All you are shown is the aftermath of Castles two month killing spree. A few poses of random mobsters with some muzzle flare and a body flying here and there. Add an out of place one liner and jokes from Castle himself and we’re at a full blown red alert. There is zero narration to explain this mess till nine pages into the issue. There's even a few pages dedicated to the memory of his family and the cross he wears around his neck. Frank “one dimension” Castle! Totally unnecessary by all means because there is no new extra motivation needed for this character that came out in 1974. Since when did Castle become a devout religious man? Did he make a deal with God to deliver the world's population of mob scum to heaven himself? Remember that stupid Punisher-Captain American suit from the regular Marvel Universe? The one Castle wore when he was up for replacing Captain America? Well here's hoping you loved it because it's back and still looks awkward. Fury promises that Castle will love it when he sees what it can do… Let’s hope so!

It's really hard to let all these nuances go and say that Ultimate Avengers 2 #1 is a must read. It pretty much encompasses everything that's wrong with comics today: Bad storytelling and unguided art. Millar and Yu phone in the issue with a stretched storyline accompanied by zero narration. Let’s hope this awkward pairing can find a style that works for them. Otherwise, Millar will pull the I-write-to-the-artists-strengths-card and place the blame on Yu.