Ultimate Spider-man has been a great series so far. Miles Morales is a really original character and with each issue you want to learn more about his character. I am happy to see that they are not forgetting Peter Parker, but not making the whole story about his death. It is Miles Morales turn to take the mantel and I excited to see what type of superhero he will become with the more experience he earns in this series. 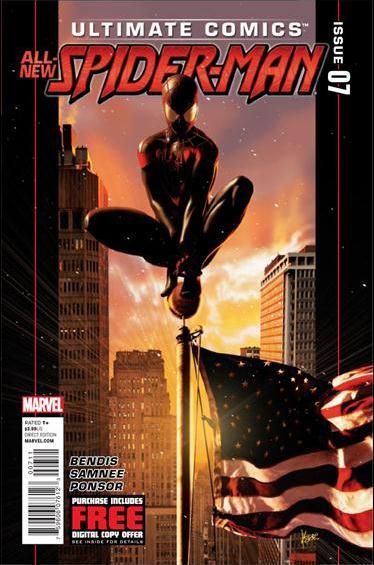 I love the covers for this series. Even though the cover usually has nothing to do with the story. The covers are still great with wonderful artwork. It reminds me a lot of the covers we use to see with the first Ultimate Spider-man series with Peter Parker.

Something I love that Bendis does with this series is that he does not just allow Miles to know everything about being Spider-man by just swinging one web. We see how Miles struggles to try to learn more about his powers and how to use them. He might look like he knows what he is doing but with the narration we can see he has no idea what he is doing.  I hope we get to see this more in the series and see how he improves over time.

It was also interesting to see in this issue how much Miles has to struggle with not telling his parents he is Spider-man. His father hates superhero, but his mother respects them. Miles does not want his father to hate him even if his father does not even know that he hates him. Miles wants advice and wishes Peter would have been able to show him the ropes. I can’t wait to see Miles meet people in Peter’s life to help him out with being Spider-man. Well at least I hope that happens in future issues.

The only thing I did not like from the story of this issue was the villain. Omega Red did not feel like the right person for Miles to fight to learn more about his powers. I think it would have been better if he fought not a super villain, but maybe a purse-snatcher. I think it will take him some time to work up to super villains.

The art in this issue is not as great as the art use to be in this series. It is a little bit more cartoony. I still like the art, but compared to what the art use to be I do not love it.  I hope we get to see the old art again soon. I think it works for Miles’s character and supporting characters very well.

I say this issue was great to see Miles develop as a superhero. We even get to see a little more of Miles’s uncle, who I think will play a big part in Miles career as Spider-man.  Can’t wait to see how Miles grows as this series continues. I say pick this issue up , and if you are not reading this series pick up some issues because it has some great story. Miles Morales is a great new character and I think we will see a lot more of him in the future.