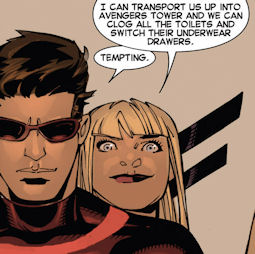 Uncanny X-Men gives me what I have been waiting for since Avengers vs. X-Men, and that alone makes me love this issue in spite of some of its faults. The entire rest of the issue could have been nothing more than the cast doing the Harlem Shake, and I still would have loved this issue. ...Though maybe I would have loved it just a bit more.

Cyclops’ X-Men come face to face with the Avengers, and Brian Michael Bendis wastes no time in bringing up the elephant in the room. After taking the blame for the death of Charles Xavier and everything else since their big conflict, Cyclops finally puts the blame where it belongs. On the Avengers. It was Captain America who didn’t trust the X-Men to handle the Phoenix situation. It was Iron Man who derailed the Phoenix and caused it to possess Cyclops and the others. It was all of them who provoked and attacked five powerful but mentally unstable people of their own creation. Cyclops stopped being truly responsible for his actions as soon as the Phoenix invaded him..It’s about time someone threw this in the Avengers’ faces.

It’s also kind of a shame it had to be Cyclops and Emma Frost.

I’ve generally been fine with the Avengers judging Cyclops unfairly over the whole Phoenix mess. They’re the Avengers. They don’t have the experience with the Phoenix, and they do, rightfully, consider themselves above the X-Men in the arena of world-saving. What has been bugging me so much is how many of the X-Men don’t seem to get it. The X-Men know Cyclops and know the Phoenix. Wolverine and Beast have their own personal grievances with Cyclops driving them, so their positions make sense. But the rest don’t really have that excuse. The majority of them really should know better, and their silence about it has been annoying.

Next issue will hopefully make some amends on that score, though.

One thing I’m on the fence about regarding the Avengers’ appearance in this issue is whether or not the Uncanny Avengers would have been better. I mean, it would have made more sense. The Avengers little unity squad are the natural opposition to Cyclops’ X-Men. But instead, we get a more traditional roster. I guess it makes sense. The focus here is really on taking Captain America and Iron Man to task over their own sins, and I think having Havok, Scarlet Witch and Rogue all their as well would have distracted from that. Still, the Uncanny versions of the Avengers and X-Men definitely have to meet up soon. There’s too much gold to mine from that meeting. 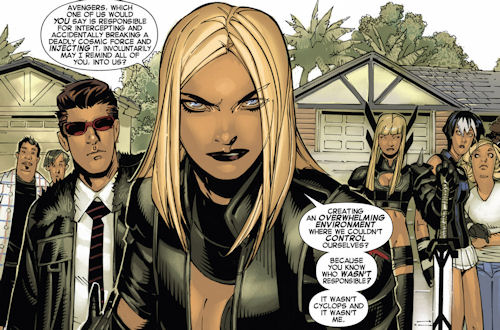 Magneto’s allegiance takes another swerve, putting the character in a pretty ambiguous position. I suppose you could take him at his word, in which case his position is very clear. But this is Magneto. It’s much more likely he is playing both sides toward his own ends, and that would be for the best. I’m glad to see the character drifting every so slightly back toward the role of antagonist. Magneto the good soldier has just about run its course.

Chris Bachalo’s art hurts this book. I’m not saying this to knock on his art. He’s a damn good artist, though there are several panels that look rushed through. My point is that his art just doesn’t work for Uncanny X-Men. There’s no denying that his art has a very unique style to it. What that means is it isn’t right for just any kind of story. It fit the zany and sometimes disturbing stories of Wolverine and the X-Men perfectly, but this is a whole different case. We’re dealing with straight up drama and intrigue here, and Bachalo’s art is poorly suited for that kind of story.

Also in regard to the art, the costumes are dreadful. Bendis’ reasoning behind changing everyone’s costume makes sense, but that alone doesn’t make the costumes good. They aren’t. I appreciate the symbolism of Emma Frost going black. It relates well to her feeling tainted and broken by the Phoenix. She can’t be the pure White Queen anymore. She gets a pass. Putting the blonde Magik also in an all black costume, though? That’s just a bad decision. Magneto’s new look is nonsensical. I’m not sure how having your powers mangled and best friend die relates to going all white and sleeveless. You can’t have characters change their looks for a reason and then have those looks totally meaningless in regard to those reasons. And Cyclops’ new look is, frankly, just damn ugly. And hey, maybe it would help him control his optic blasts better if his visor wasn’t in the ridiculous shape of an X.

Uncanny X-Men delivers the goods. Finally, the Avengers get the blame for what went down during Avengers vs. X-Men, and Brian Michael Bendis starts returning us to the good old days when the X-Men were kind of outlaws in the Marvel Universe. Things have become far too homogenous and happy these days. It’s refreshing to see such a division taking shape between the Avengers and Cyclops’ X-Men, and it’s one that I don’t see any bridges crossing it any time soon. Despite that, Chris Bachalo’s art does a disservice to the book, and it really would be better to have an artist with a more appropriate style for the kind of stories Bendis is telling here.