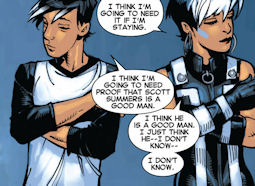 Issues like this one are one of the reasons I like it when a single writer handles two interconnected titles. Uncanny X-Men covers pretty much the same ground as last week’s All-New X-Men, but it does so from the perspective of the Uncanny X-Men cast. Sure, you can manage this kind of thing with separate writers. But it’s more difficult to coordinate, and both writers need to be willing and on the same page. When it’s just the one writer, that all is made automatic.

As in All-New X-Men, Cyclops has shown up on the doorstep of the Jean Grey Academy to offer an invitation to any who would like to attend his hidden school instead. I like the route Brian Michael Bendis has gone with this. It’s both believable and rational. Scott’s not picking a fight. He has just come to give everyone a choice they deserve to have. I always worry that Marvel is going to give Scott the Tony Stark treatment. Tony had the less popular opinion with Civil War, and some writers chose to make a villain out of him for it rather than just let him be a man with a valid, though opposing to many, point. Scott also has a point. It’s unlikely that the rest of the world will leave mutants alone, so there is a need for protection that no one else but him seems willing to offer. And so far, he’s not really lashing out at those whom normally would -- and probably still should -- support him.

While Scott’s confrontation with his former allies goes on, this issue takes us into the head of Emma Frost as she converses telepathically with the Stepford Cuckoos. I love the Cuckoos. They were one of the best things introduced in Grant Morrison’s New X-Men, and I’m always glad to see that they’re one of the aspects of that run to endure. I do think it was a little too on-the-nose to have them turn out to be vat-grown “children” of Emma, but that reveal didn’t really do anything to ruin them for me. And to be fair, it does end up factoring in well with their conversation with Emma, giving it a little more emotional weight than it otherwise would have. Bendis writes them well, balancing their brattiness with some real emotion to keep them humanized.

Oh, the Danger Room. I hate the Danger Room. It’s a damn holodeck. It has never been believable that the X-Men have this utterly amazing technology and they use it strictly as a glorified gym. It’s an excuse for artists to draw crazy action scenes that don’t need any justification and often exploited for cheap stunts at the opening of an issue. So, I hate it. But the new students of Uncanny X-Men accidentally stumble into their own Danger Room, and I have to admit... the chaos that ensues and their reactions are pretty fun to see. Letting them have their run of the place unattended for a little while proves to be a good opportunity to flesh them all out as more distinctive characters. 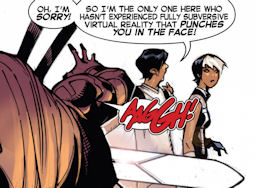 Which of the time displaced original X-Men joins Cyclops’ side is revealed, and it is disappointing. He’s probably the least interesting option of the five, and it’s hard for me not to see this happening because there was really nothing else to do with this particular character. Jean Grey, by far, would have been the most compelling choice. That would have ruffled so many feathers, and it would have been believable. She’s not going to make the future worth all their suffering by staying at the academy named for her. The second best choice would have been the younger Hank McCoy. Holy crap. Seeing the younger Beast reject and oppose his older self would have been great. But instead, we get this guy, who has nothing else to do so why not switch sides. I’m not saying Bendis won’t be able to do any good stuff with this, but at this moment, it couldn’t be any less exciting.

Adding to this disappointment is who all ends up taking Cyclops up on the invitation, meaning pretty much no one. It’s just the Stepford Cuckoos and the least interesting choice of the originals.  Seriously? That’s it? None of the current X-Men? None of the other student body? Scott wins over a grand total of four? That’s pretty hard to believe. I can understand wanting to keep the books cast small and wanting just to get the Cuckoos and one of the originals in. But if that was all Bendis was after, he probably shouldn’t have bothered with the grand invitation. I wasn’t expecting a mass exodus, but I think it was fair to expect a solid handful of X-Men and students alike to come with Scott when asked. As the past couple issues have pointed out, holding what happened with the Phoenix against him is nonsense, and a lot of these characters were right there on his side up until the Phoenix Force came into play. So I really can’t buy into the idea that the rest of the X-Men are now so universally opposed to him. 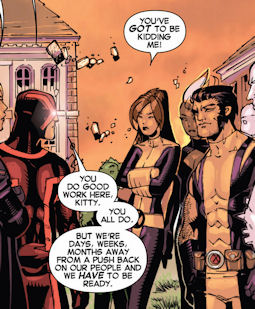 We deviate from the inter-X-Men drama to address the new nature of Magik’s powers and what dangers lurk within it. It’ll be a nice break from what’s been going on so far, but I’m not really looking forward to it. This is entirely due to my own bias against Illyana Rasputin. I’ve kind of hated the character since I started reading comics. I hate her. I hate Limbo. I hate the Soulsword. I hate it all. But that’s just me. Bendis -- and Kieron Gillen before this -- have done an excellent job with Magik, and Bendis sets up the next story with her pretty well here.

I haven’t changed my mind about Chris Bachalo’s art not suiting this series. This issue points that out to me even more, because it’s tackling the same scene as we saw in All-New X-Men with more suitable art. The exaggerated style of Bachalo just has nothing to do with the tone of these stories. It’s a distraction and a disservice.

The writing of Uncanny X-Men continues to be strong, but the disappointing result of Cyclops’ invitation to the rest of the X-Men drags this issue down. It will be great to have the Stepford Cuckoos part fo this cast, though.