By: Justin Moody | TV Reviews | March 3, 2012
This week was the first time in Undercover Boss history that the CEO didn't fill the role of the employee. Popeye's CTO (Chief Talent Officer) Lynne Zappone transformed herself into Pam in order to get a real-life perspective of the operations and efficiency of her company, but was shocked with several eye-openers leading to major changes in the franchise.

During her week, she met with four unique individuals: Aaron, Josh, Gina and Douglas. Each employee gave Zappone a different perspective of how much more the corporate level needs to be involved with its staff. She was shocked to learn from them that typical business practices such as employee recognition and discounts no longer exist. She also discovered that the franchise could have been more supportive of its employees affected by hurricane Katrina. During her visit with Gina, she learned that Popeye's actually fired her for missing too much work as a result of the disaster.

At the end of the week, Zappone had rewarded Aaron, Josh and Gina for the time she spent with them. Although Aaron was disciplined for his inappropriate behavior, he was provided a mentor and a promotion to his dream job as a traveling trainer. Josh, who was without transportation and wished to further his education received $10,000 for a car and a $20,000 scholarship to attain the degree he always wanted. And Gina, who was previously terminated despite her hardships, became the first $10,000 recipient of the company's new disaster relief fund to fufill her wish of becoming reunited with her distant family.

But the true unsung hero of this episode was Douglas, the Janitor of Popeye's Horn Lake location. Although he lost everything he owned to hurricane Katrina, he purchased his own non-toxic cleaning supplies for work to protect the children that enter the restaurant. He took pride in his job, carrying with him a watch that he was awarded for being employee of the month in 1989, claiming "I may not own Popeye's, but it's my store". He revealed that he volunteers as a cook in a soup kitchen for his church. His actions appeared to really touch Zappone, but her reciprocation really fell short and left a bad taste in my mouth. In the end, Douglas was informed that the employee of the month program as well as other incentives would be re-introduced, and that a $10,000 donation would be made in his name to his church. But unlike the other three employees that were well compensated for their efforts, Douglas received no such reward. 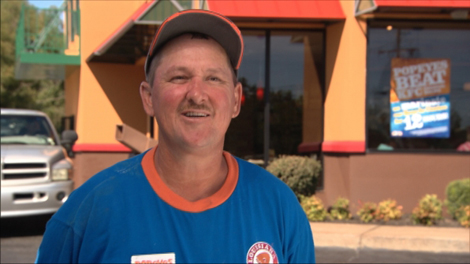 This episode has really changed my opinion of this company in a negative way. Douglas showed the most selfless dedication out of any employee in this entire series, yet received nothing for himself in return. He is one of the few people out in this world that deserves much more than what he's received.

UPDATE (03.04.12): After some further research, I have learned that Douglas Finch no longer works for Popeye's. He has decided to devote his time in full as the cook in his church's soup kitchen. However, this leads to many questions that not only myself, but many other viewers of Undercover Boss and customers of the restraunt want answered. Why did Douglas leave a job he seemed to love so much? Was his lack of a personal reward the cause of it? Did he possibly refuse a personal award and it wasn't able to be aired? I thought that I would contact Popeye's Media Relations department to get a little insight and I received the following response:

"Popeyes greatly values all of its employees. Please be assured that we took extraordinary care to ensure that rewards that were revealed in last night's episode of Undercover Boss, as well as many that were not aired, appropriately reflect our appreciation to each of the featured employees and their individual needs and circumstances."

I really wasn't satisfied with a response that didn't really answer the question. It was only after a followup e-mail and several hours of waiting that I was given another somewhat definitive response.

"Our contract with CBS prevents disclosure of any additional information about employer rewards beyond those that were aired on the show. It is our policy to not comment on personnel matters, no matter what the circumstance."

So for those of you wanting some closure on what exactly happened and why, we may never know. Popeye's either can't or won't provide any further information, so it will most likely remain a mystery. But one thing we know for sure is that the show did not display enough appreciation for someone that I believe was one of the best employees that I've ever seen. If you ever happen to meet Douglas Finch in the Horn Lake, MS area, shake this man's hand and thank him for everything he's done, because he is a true hero.

UPDATE (03.05.12): We have just been contacted from Douglas Finch, courtesy of David Vincent with more information on where he is and what happened.

Player Affinity: We have learned that you are no longer working for Popeye's. Was there any specific reason relating to Popeye's or the show for why you left?
Douglas Finch: I was only working part time at Popeyes for 25-30 hrs a week. I left and went to work at Mcdonald's which offered me more hours. I worked there for a few months and now I have had to take time off because of health reasons. I am having problems with circulation in my leg and I am under medical care. I am still involved at the Warriors Center the recovery program that I was a resident at before working at Popeye's.

PA: After watching the show, we noticed that you were the only one that did not receive any personal compensation. Was there anything offered personally to you that wasn't aired?
DF: Yes. They gave me a leather Popeye's jacket. They also agreed to send a catered meal once a month for a year to the Warriors Center.

PA: A lot of people were really touched by your selfless dedication on the show. Is there anything you would like to say to our viewers?
DF: God has brought me out of a really hard life and I am just very thankful for everything. He has given me a heart to care about other people more than myself. Now I just want to help others. With God all things are possible.

So there have been a couple more items offered that weren't aired on the show, but Douglas still should have received more for his work. I am very moved by his continued dedication to help others and wish him a safe and speedy recovery.

If you would like to learn more about the Douglas' success story, or to make a donation to the Warriors Center to help others in need, please visit http://www.warriorscenter.com.

Have you seen this episode? Tell us what you think below!