Unleash Your Rage Upon The Gods In Asura’s Wrath

Asura's Wrath is just the game I needed to see at E3 this year. For the most part the entire show has been pretty stock. Sure its always interesting to catch a glimpse of something new from games like Gears of War 3 or Uncharted 3, but for the most part we already know they will probably be quality titles and just from playing previous entries in either series we know how they are going to play. In the context of E3, they are not the type of game I want to see. Asura's wrath however, is unlike anything you have seen before.

The game is off the charts in terms of scale and sheer amount of craziness contained in it. The art style alone is incredibly unique. It meshes Japanese mythology with a healthy dose of sci-fi to create an image that is individual to anything you could have really seen before. Capcom's Kazuhiro Tsuchiya spoke about the art style as something that was sprouted by an inital desire to have no influence from any other games to come through. They wanted to create something completely new for Asura's Wrath and they have, for the most part, achieved that. 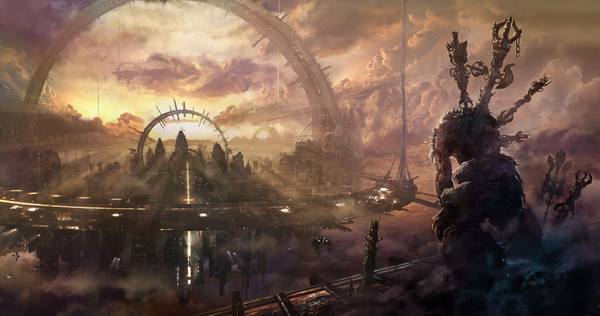 This insatiable quest to create a game that is completely different to the rest of the market reaches to the gameplay also. Tsuchiya mentioned that they have approached the design of Asura's Wrath in a manner not typical to the rest of the industry. The entire story was planned out before any sort of work began on creating an actual game to play. As a result, Asura's Wrath contains extremely variable action from moment to moment as each aspect of the gameplay was designed based on the particular scene from the story that was in question. Its an interesting approach that gives the game an incredibly immersive and cinematic feel, but it remains to be seen just how of much Asura's Wrath will in fact remain as varied as Capcom claims. The clips of the game that have been shown so far shows off this variable action however, as the first boss fight was a breathless affair that started with your foe being of similar stature to the player character and ending up larger than the actual planet the game takes place on. Yes, that's right, bigger than a planet. That says all that needs to be said about the tone of Asura's Wrath, wouldn't you say?