You might have heard this classic story somewhere: He was once a royal retainer until his lord's death in battle. Miyamoto Usagi is now an unemployed samurai, a ronin, walking the warrior's pilgrimage in search of harmony. But it seems that wherever this warrior's journey takes him, trouble is not far behind. The concept of this story is spawned from countless samurai tales/movies. In fact it could be a great TV series. A Hollywood producer might imagine this story with a badass actor and see this as a bloody, gore and guts feature. But it would come with a surprise to them when they see that our protagonist is actually an adorable bunny.

Usagi Yojimbo has slashed the comic book world for twenty-five years. He appeared in the Teenage Mutant Ninja Turtles cartoon, where he got his own action figure (the series won many awards and is the best introduction to readers of what feudal Japan was all about). But still people keep asking, why not a real guy? To be honest with you my first exposure to Usagi Yojimbo was the TMNT action figure. I thought this bunny could kick Bugs Bunny's cross-dressing behind any day of the week. It was years later that I saw Usagi again, in a comic no less – I immediately recognized the character and now I know that Stan Sakai is a genius. By making Usagi anthropomorphic, the character became an icon. Anybody who had any type of exposure to him knows that he is the rabbit bodyguard  – he is Usagi Yojimbo. 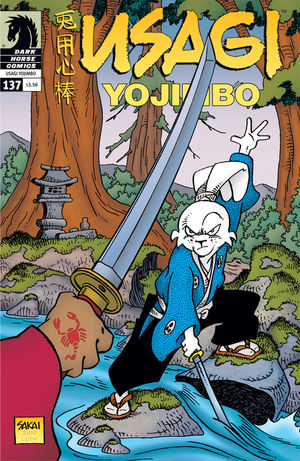 But after twenty-five years, not only is Usagi iconic but his stories remain solid and consistent. Our favorite warrior hare has a knack for finding trouble and after a hundred and thirty-seven issues he still manages to entertain us – maybe because the stories are not toned down to fit Usagi's cartoonish appearance. Usagi actually lives in a world where scoundrels, killers, double-crossers and the way of the warrior are the norm of the day. Also unlike a cartoon, Usagi kills if he has to. This new story arc doesn't shy away from any of those topics.

The current storyline is entitled "Those Who Tread on the Scorpion's Tail." We find our hero staying as a guest at a local fencing school. Usagi has volunteered to aid in the hunt of the infamous Red Scorpion gang. Now the magistrate's son has been kidnapped and Usagi has joined the search. But like a good suspense tale, the school's master knows more than he is telling.

Issue #137 is part two of this storyline and Usagi finds that the teachers are actually behind the kidnapping of the magistrate's son. It seems that part of the school are actually members of the Red Scorpion gang. Unfortunately, Usagi discovers this after the magistrate's son gets killed. At the end we are left with a cliffhanger during the start of a showdown between Usagi and one of the teachers, but the teacher or sensei reveals that they are not part of the Red Scorpion gang.

The fact that the book has been consistent can clearly be seen in the art. Stan Sakai's art has barely changed in quality. From the first comic to this one, you can hardly spot any changes in the artwork, except for some minor changes in the inks. Also, Usagi's head is a bit smaller now and the backgrounds have more detail. Usually when an artist has been drawing for this long, they get burned-out and the art suffers.

But with Stan, that is not the case. Even his writing is no different as he is able to keep the stories fresh and interesting. By this point in his career, Usagi must be the easiest character to write since his reactions to the stories must come as a second nature to him. Also, Sakai possesses the ability to keep every chapter accessible to new readers – right now you could pickup issue #136 for the first time and there would be no need to read any other back issue to know what has happened.

The bad? The one thing that might bother new readers is that after twenty-five years, it's still in black and white. But like Sin City this gives the book the right tone and also maintains a Manga aspect to it.  Also after twenty-five years, the possibility that this book might end draws near every day. It's possible that the character will get stale.

But with an easy access to every new story arc and a great way to discover Japanese culture in an entertainment form, the book has no sign of getting stale yet. What this book needs is a cross-over to another medium like a TV series (hopefully a good one). This would give new blood to the book, like the Peanuts cartoon did for the strips. Usagi Yojimbo has brought us great solid storytelling with a mix of good action for twenty-five years. He is an icon and every comic book fan should pick this book up at least once. But if you're going to pick this book, pick the previous issue, too, so you can get this story arc right from the beginning.

Overall Score - 8.0/10
*Newbies are allowed, but pickup the previous issue just in case*