With the release of Portal 2, many people, especially PC users, have decided to revisit the freely available editor (to anyone who has purchased a Source-based game) that allows players to construct maps used in the Valve library. Whereas previous versions supported GoldSrc, Quake and Quake II, the current version of the Valve Hammer Editor can only be used in conjunction with Source titles. It remains one of the most accessible and easy to use editors on the market, with large icons, help files and tooltips to get a beginner started without much trouble. Exemplifying the concept of ‘simple to learn but hard to master’ the Source engine is being constantly improved upon with new tools and additions that accommodate technological breakthroughs in the industry. 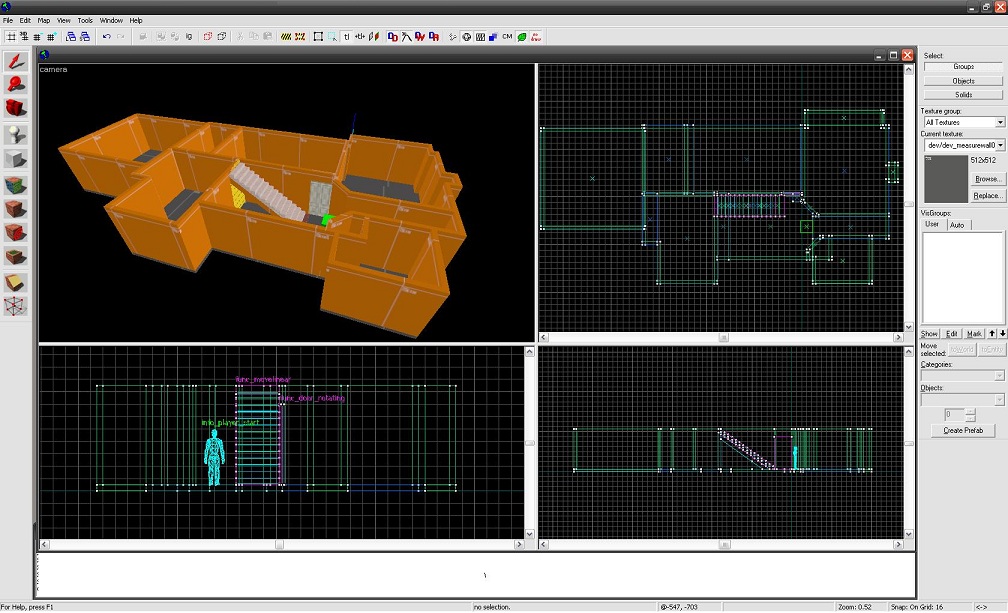 The Hammer Editor has a few differences from the more conventional and widely used editors out there, such as the Unreal editor. First of all, Source levels originate in a void, devoid of all life and color, allowing you to insert spatial objects and dynamic entities as you like (called an additive system); Unreal, on the other hand, requires you to carve out rooms from an almost infinite block (called a subtractive system). Both systems have upsides and downsides, but it falls to the user to determine which they prefer.

There are two basic concepts that encompass most editors: Brushes and Entities.

Brushes are the continually present physical objects in the game world, represented by solid geometric shapes (i.e. rectangular prisms and various permutations of such) which are usually used as floors, walls and ceilings. They are also used to block line of sight for lighting calculations and render distance (something that becomes extremely vital in maintaining reasonable performance in a map). Brushes are painted on each side by user-chosen textures, which must be pulled either from the sizable Valve-provided archive or inputted from an outside source image file. After the initial architecture of the map is complete, detailed objects, lights, sound and actor entities must be added. 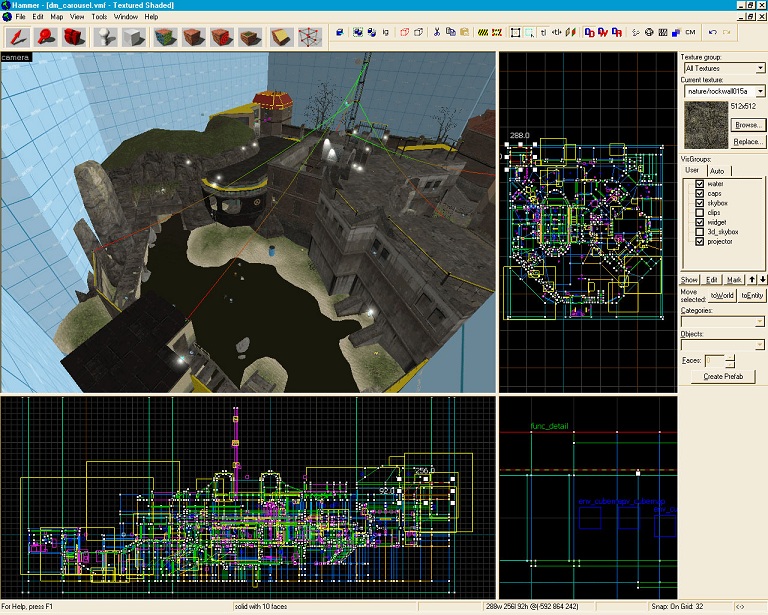 Entities are what fill your basic brush construction with things to do and see. They can be lights, be they directed, point-types or dynamic; sound effects and soundscapes for adding a auditory element to an area; weapon and character placement; particle and gib generators; physics anchor points and many other things that would fill pages to describe fully. Entities can also import detailed 3d meshes from 3d modeling programs rather than building them with brushes; detailed brushes create issues in the line of sight calculations and slow compilation significantly, whereas imported meshes are not ‘seen’ by the system at that stage and thus require very little resources in comparison. For this reason, not many games use brush-based details anymore in favor of imports. One improvement the Source-based editor includes is the use of displacement map brushes (a tool that splits a brush into a grid that can be manipulated into hills or realistic looking terrain, manually or through an imported heightmap); although it is important to remember that the line of sight is comprised by converting a brush into a displacement map.

There is a third type of material that can be used: Interactable Brushes. Essentially a brush that has been given the attributes of an entity, these can be used as fields that embody certain properties. For example, a brush can be made into a block of water that the player can swim in, or a lava zone that imparts instant death. Otherwise static walls can be made into doors that open by a trigger or through the physics engine, while others can be made into buttons the players can use or jump on to provide certain effects. Any brush can be made into these special brushes, but once they are changed they cease to function as normal brushes and no longer block line of sight; of course these blocks can be changed back at any time. 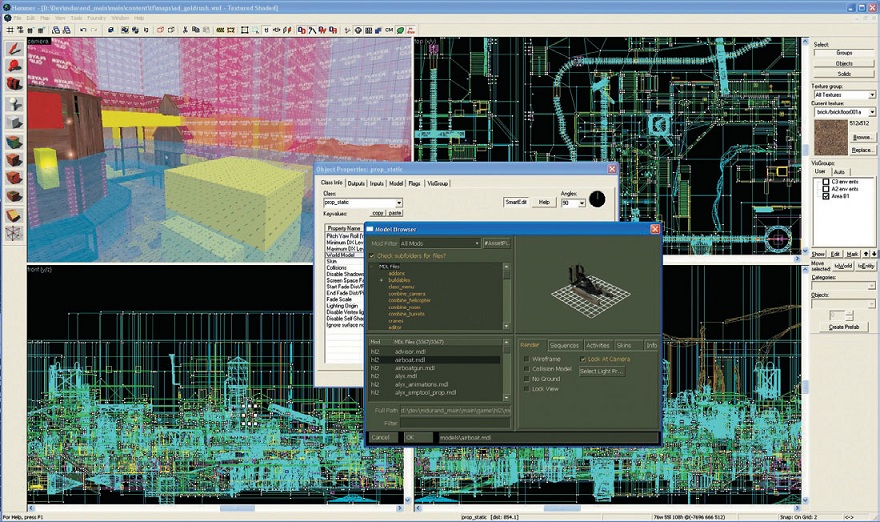 The Valve Hammer Editor is a versatile and intuitive, with most functions easily explained with the built-in help feature or in the form of tooltips. The basic tools are easily available with a bit of exploration, although if you want to use more advanced abilities than just brushes or lights it becomes vital to investigate tutorials that are easily found on the internet (I learned many skills from these resources and recommend them for a better understanding of the systems involved). If you want to get into mapping, the Source engine is great for beginners and experts alike.

Some good tutorial sites include:

http://www.gamebanana.com/ - not so much a tut page but a place to post new maps and look at other people’s submissions