Vanquish has been a title that up to this point, I had no idea what it was. All I knew was that it was some sort of third person game with a guy in a suit. After sitting down and playing the demo, I feel like I know just about enough to conclude: Vanquish should be great.

The fact that Vanquish is a Platinum Games (Madworld, Bayonetta) game is apparent from the get-go. It’s fast, frantic, and most importantly, fun. I will admit I was slightly turned off by the way that the movement and shooting felt similar to Lost Planet but once I realized the sheer ridiculousness of everything going on around me, that was forgotten.

Vanquish’s demo drops you into an area filled with bad guys and says have at it. You then proceed to shoot, leap, and slide your way through this fifteen minute chunk of gameplay. The craziest feature within Vanquish is the AR mode. Where, once things start to get a little hectic in battle, your screen will go slightly dim as your character’s surroundings will slow down while his speed will increase. This feature allows you to navigate through the barrage of bullets and wiggle yourself back into cover.

Cover, like in many other games these days, plays a huge part in Vanquish. Though unlike many other games these days, Vanquish has an interesting spin on it, your character (Sam) has a special suit. If it’s because we’re in the future or if he’s special in some way, we don’t know. But his suit increases his speed and allows some crazy things to happen with him, for example; the way he switches guns? They just transform within his hands. 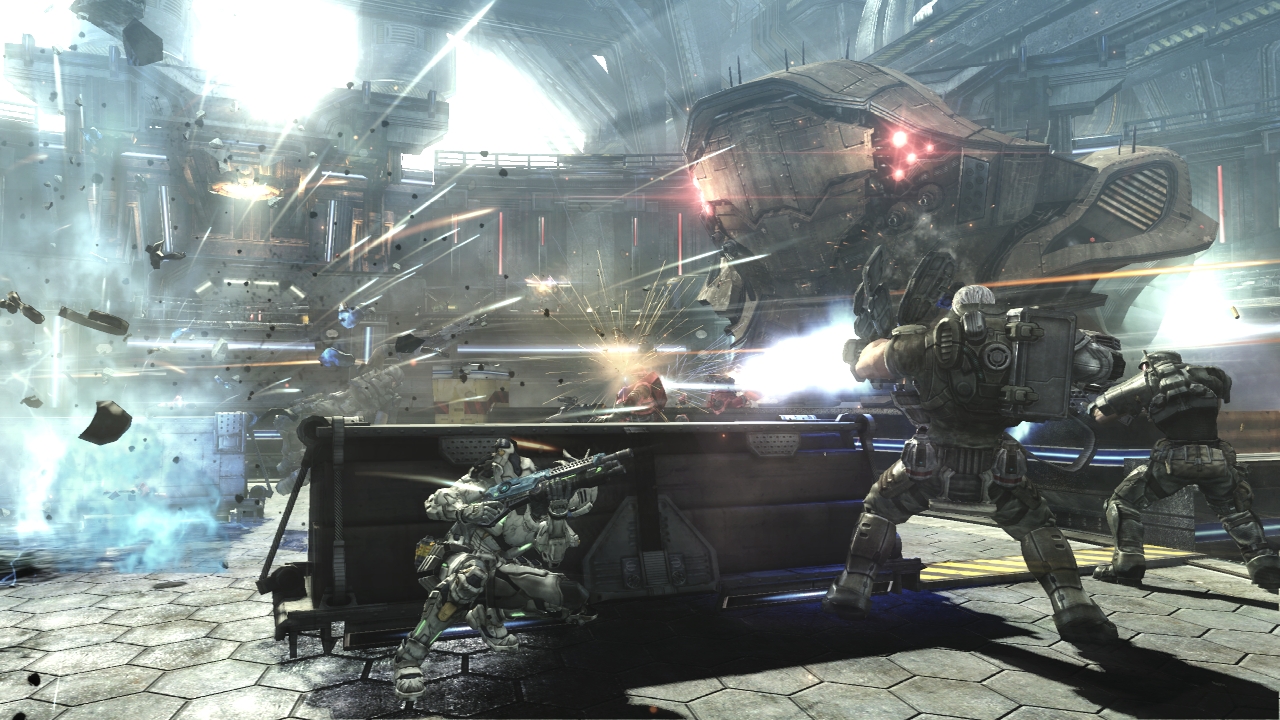 Not only does it actually sound great, it looks fantastic. It’s not even out and they’ve already hit an almost perfect frame-rate and have a very fitting animation system that never gets caught on stray parts of the environment or anything. Vanquish does combat correctly; other games need to take note.

There wasn’t much story in the demo but from what little I could pick up, it seems like your average war story. Main character, he’s grizzled, but in the end, he also saves the day. Roll credits. I really respect the way they seem to be treating the voice work in the game. It’s a generic, deep voiced protagonist but he overexaggerates almost everything he says to the point where I couldn’t help but get a chuckle from him. There’s also a large man that at one point says “I think I’m going to need a bigger gun.” Gotta love it!

Going into Vanquish, my excitement for Platinum Games’ new product was teetering on non-existent. Now after getting my hands on the game, I’m having a hard time debating whether or not I should place it on my Anticipated Xbox Games list. Vanquish is a game that should now be on everyone’s radar, you’ll understand once you play the demo.

The Vanquish demo is now available on Xbox Live