By: Justin Moody | Comic Reviews | June 26, 2010
The wait is over and the fastest woman in comic books has finally arrived with her own series! Pilot Season winner Velocity returns with a brand new first issue from writer Ron Marz (Magdalena, Witchblade) and artist Kenneth Rocafort (Madam Mirage, The Core). I'd say that art is what has made this issue so highly anticipated. A beautiful female Speedster is great idea but the art seals the deal.

The story begins with Velocity, a.k.a. Carin, escaping from some killer robots. She explains that she's fast... very fast. In a way it's a tutorial on her powers and weaknesses. Ever since she was enhanced by the Cyberdata Corporation she's been able to run at mach 7. No she can't shake her molecules to run through walks or travel through time, but she can move fast enough to create contained whirlwinds and bounce off walls. 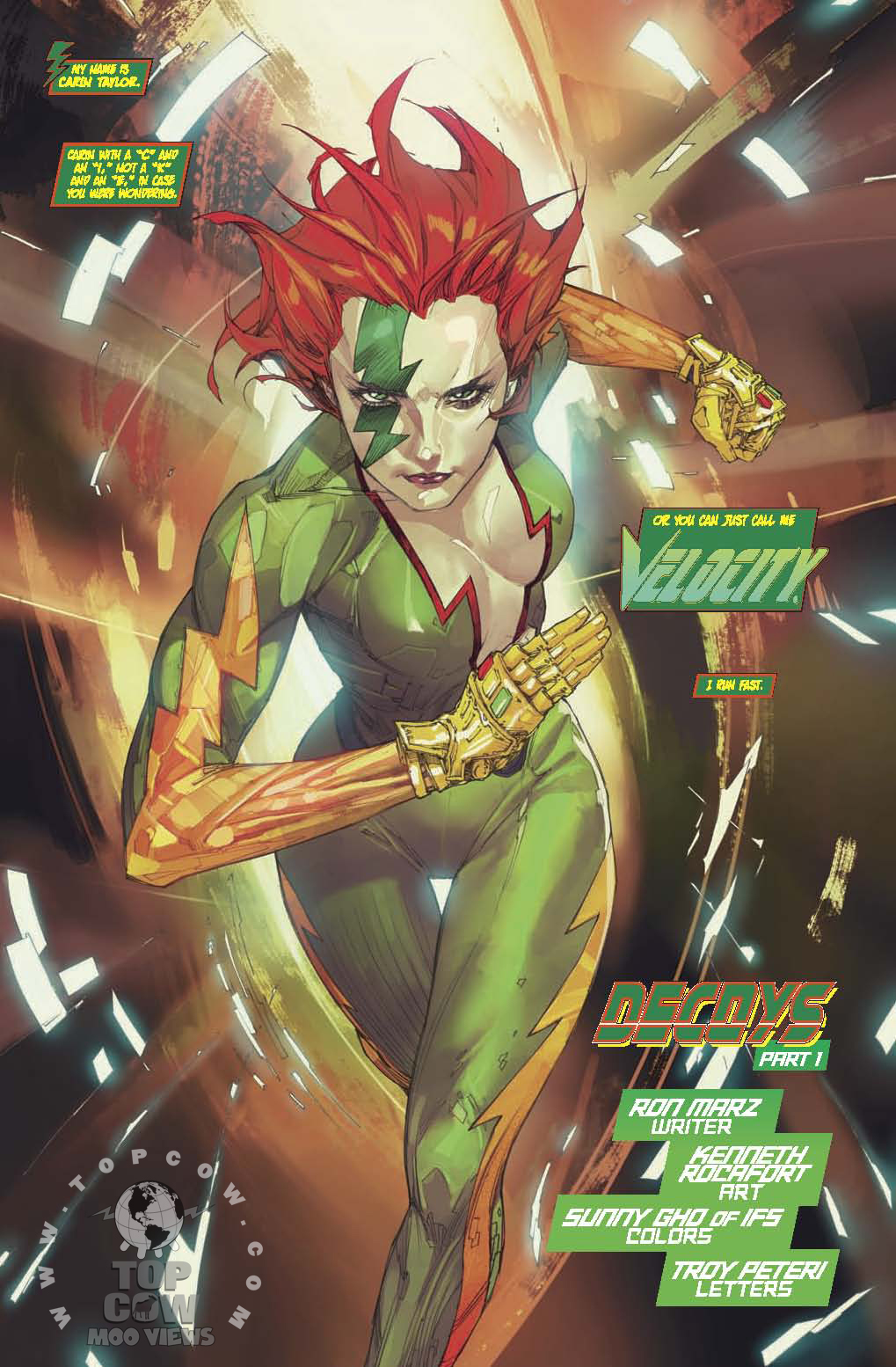 Her problem is that she's abandoned the life that Cyberdata tried to give her, but now she can only find a job as a superhero... unpaid superhero. Her quite afternoon watching old movies is spoiled as the killer robots come for her. She manages to escape most of them until she's hit with a time bomb that stops her dead in her tracks.

She awakens in a mad scientist's lair with someone brooding over her. His name is Dr. Erasmus Paine, which is a fitting name for a villain, and he explains to her that he was the first of Cyberdata's experiments. He continues to say that without him taking a scientific leap, while working at Cyberdata, she would not be what she is today. Dr. Paine really doesn't like her and her friends that benefited from him being turned into genetic goo and has decided to give them all a virus. Since he started as a puddle of flesh, that's just what the virus will do, turn them all into soggy humans.

The only thing A-typical about his plot is that he's already executed his plan by issuing the virus to Velocity and her Cyberdata enhanced friends. The virus gives them an hour of life left to live before wicked witch time. The only catch is the Dr. Paine used robot duplicates of Velocity to issue the virus. Now Velocity has an hour to save her friends and herself... good thing she's fast! 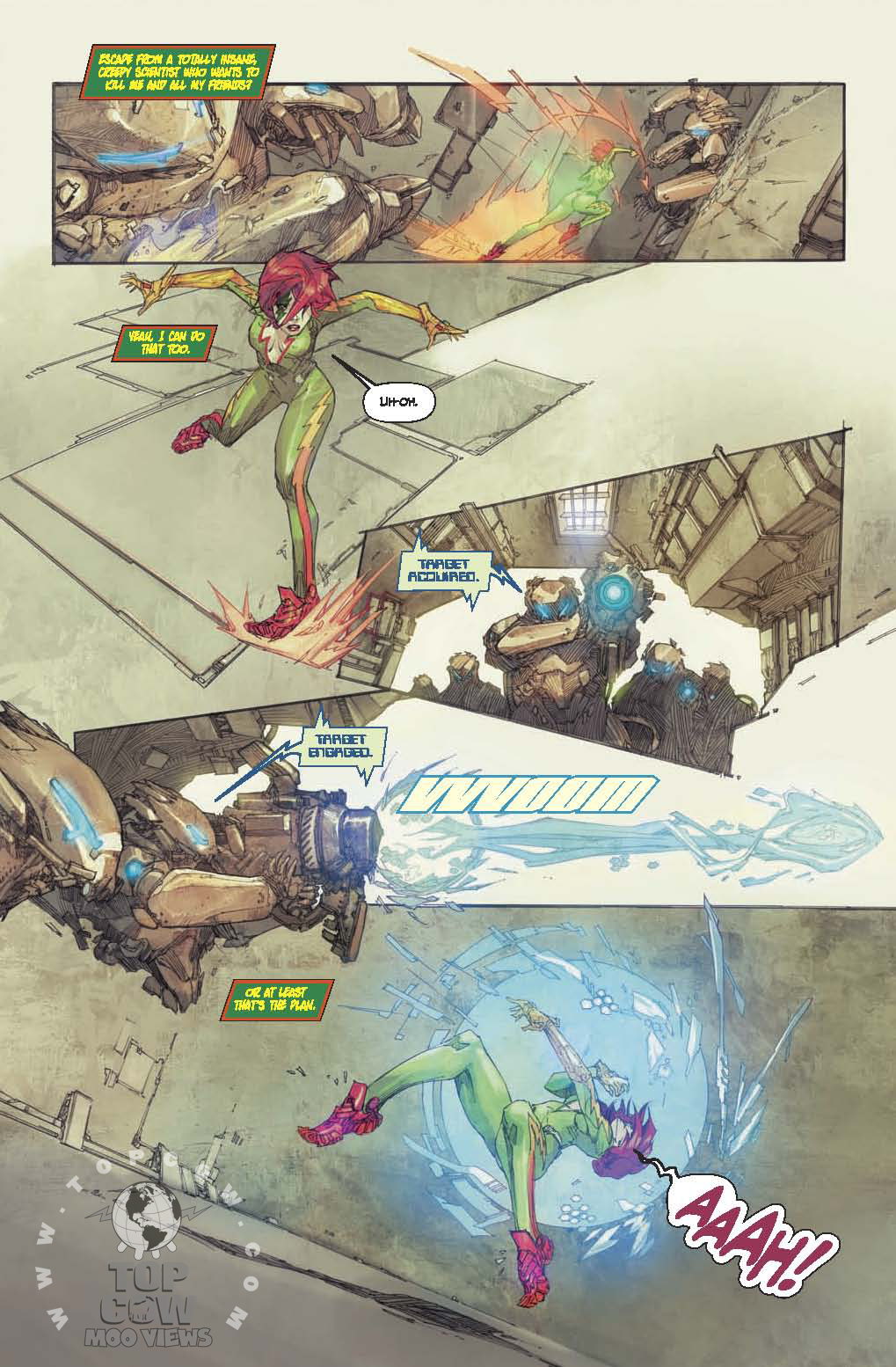 Ron Marz steps up his game with this issue. Sure there's not a lot of dialog and it's mostly Velocity spouting information to the reader that she shouldn't be giving, but it works. It works very well in fact. Velocity as a character doesn't fall into the typically shortcomings of speed characters. She doesn't complain about the world being to slow or how there's never enough time. No, in fact, she touts the fact that she's fast. Marz gives the reader just enough information about Velocity to hook their interest and make them want more.

The art is amazing! Rocafort is one of comics top talents and this issue shows why. Not only does he not simply copy the "big two's" pre-established style for Speedsters, he reinvents it! Now, that's not to say that you won't see a ghost figure or a streak of green, but what he's done is make each panel of Velocity running detailed. She moves fluidly, even when changing directions at the last second. It's very refreshing to follow someone running and not have it all be lines and blurs. Velocity as a character... is beautiful, sexy and strong. Every bit of hair, turn of her body and pose is gorgeous and stunning to look at.

Another item about Velocity that the creative team has chosen to do, is that she doesn't move fast all the time. She doesn't perform mundane tasks as fast as possible simply to show off or because it's easy to draw. When she moves fast there is a reason for it.

There's a lot of anticipation for Top Cow's upcoming events but I think this one takes the cake. It's not to be missed and the sheer beauty of the issue is sure to make Rocafort even more popular amongst comic fans. The only problem with a book about speed is that the next issue can never arrive fast enough.

Seriously Rocafort is amazing! I can't gush over his work enough! Follow Dustin on Twitter where he follows Rocafort as well.