"Hunters Become Hunted"
By: Jim Bush | Comic Reviews | September 12, 2014
The premise of Velvet, an espionage series by Ed Brubaker and Steve Epting, was very engaging, hitting in the crosshairs of classic spy thriller territory: someone is framed for a murder she didn’t commit and must go on the run. Somewhere in that running, I felt that the series lost a little of its forward umph, though it did reveal some compelling background about our hero, Velvet Templeton. However, issue #7 is one of the best so far, offering a lot of suspense. 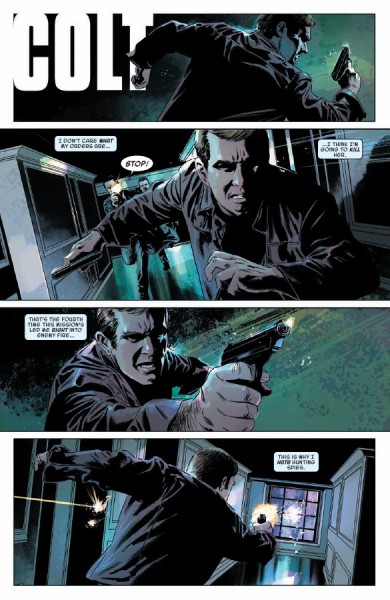 In Velvet #7, Brubaker and Epting offer a different take on the point of view. Rather than follow Velvet, as we have so far in the series, instead we get an issue from the point of view of two men who are chasing her – Colt (also known as agent X-33) and Sergeant Roberts, who is heading the search. It’s risky to spend the whole issue apart from our main protagonist, but it pays off because not only do we get a strong sense of the people who trailing Velvet – which helps build a deeper story – but through their eyes we also get a fuller picture of Velvet.   Colt has been on the ground, running through leads left by Velvet, though most turn out to be false smokescreens. He realizes that he’s been underestimating Velvet, first because he thought she was just a secretary and then because he figured she’d be rusty after being out of the field for so long. Gradually, he begins to wonder if Velvet is not as guilty as the ARC-7 seems to think. Roberts denies Colt’s thoughts but even he feels lost about how to track someone so unpredictable. 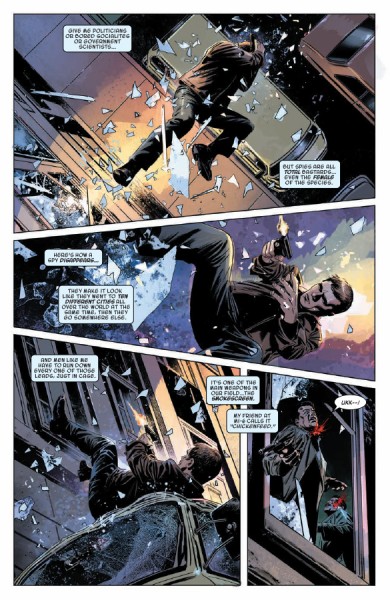 For an issue that does not have any present-time appearances by the main character, Velvet #7 is rather suspenseful. The story really delves into how much of a cat-and-mouse game espionage is when both sides are competent. So much involves strategy and Velvet is intelligent enough to be unpredictable. She may have started behind, running for her life and trying to figure out who framed. Now, though she hasn’t determined the last question, she is firmly ahead of ARC-7, having sort of kidnapped the Director (who is one of her few friends).

The art by Epting and colorist Elizabeth Breitweiser is sensational as usual. Epting draws Colt and Roberts differently enough that it’s easy to tell them apart even though they’re both wearing suits. Colt in particular has a Steve McQueen in Bullitt vibe. The story has both Colt and Roberts moving around through locales and they’re all pretty distinctive in appearance, from the streets of Frankfurt to the desert to a seedy underground bar in Austria. 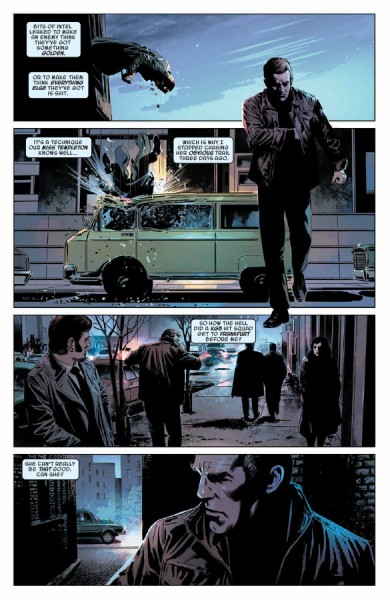 In addition to pacing, point of view, and art, Velvet #7 also excel at characterization. It’s mostly been a strong suit of the series so far, as readers have seen many sides of Velvet. Here in their brief tales, we get strong versions of Colt and Roberts (who we have previously seen in smaller glimpses). Also, brief appearances by characters like long-haired scientist Hans are very enjoyable. So far, the new arc of the series, called “The Secret Lives of Dead Men” (which began in issue #6), has been very strong. After Velvet #7, like Colt and Roberts, I have no idea what Ms. Templeton is going to do next.
Rating
8.9
Pros