By: | Comic News | February 14, 2011
Viper Comics and 1821 Comics are proud to announce the APRIL 2011 release of MISSING LINX, an original graphic novel, created and written by Dale Mettam (Odd Rods & Attack of the Killer Tomatoes) and illustrated by Courtney Huddleston (A Bit Haywire and upcoming title The Last Dinosaur)

Dr. Erasmus Q. Bedfellow is bent on releasing the creatures of the Fantasy Realm into our dimension, using the creatures of nightmares to rule the world. Only one thing stands in his way. An unlikely group of heroes - the result of Bedfellow's last attempt to breach the border between realities – Big Foot, Sasquatch, Skunk Ape and The Yeti. 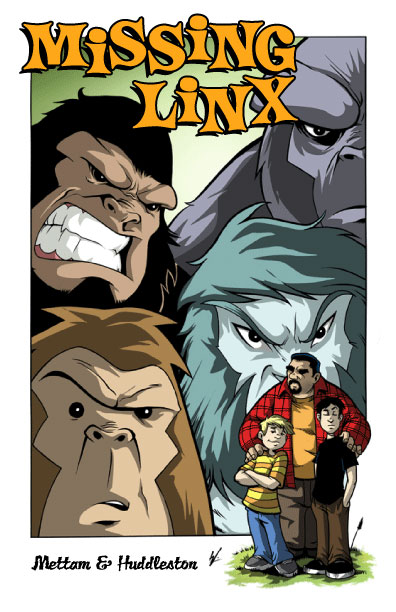 About Viper Comics
Viper Comics, has been publishing comic books and graphic novels since July 2003. Our debut title, Dead@17 was an instant hit and was noted as a top 10 Hot Comic in Wizard Magazine. Viper has since released a number of successful books, including Daisy Kutter, a critically acclaimed series that was nominated for a Harvey Award in 2006 and was also noted as a top pick for young adults by the American Library Association. Viper has published over 100 comic books and 40 graphic novels. Viper has had four graphic novels recommended by the American Library Association, The Middleman (TV show on ABC Family), Daisy Kutter, Emily Edison, and Oddly Normal.

About 1821 Comics
1821 Comics is a new comic book/graphic novel company based in Los Angeles, California and founded by entrepreneurs Paris Kasidokostas Latsis and Terry Dougas. The company is devoted to bringing exciting, eye-popping new titles to the world of comics. Along with its own titles, 1821 is teaming up with some of the top publishers on new cutting-edge books. 1821 Comics will remain a diverse publisher with projects for both men and women, spanning all age groups. The company is highly devoted to story, content and artwork that will move readers from beginning to end.

As a special bonus, enjoy the trailer for the book as well.