It stands to reason that if comic books can be adapted into movies, TV shows and videogames that those other forms of entertainment can be adapted into comics. That's why Dynamite Entertainment is bringing the SyFy channel's Warehouse 13 to comic books this August. If you're a fan of the show then you should probably check it out since the stories won't be limited by budget restraints that prevent them from traveling afar, in fact the first story arc takes the team to Brazil! The only question I have is where's the cover from Alex Ross?

Enter a world of endless wonder as Syfy's smash-hit dramedy makes its comic book debut this August!   When a series of sudden, unexplained sinkholes appear beneath the streets of Rio de Janeiro, the Warehouse team heads down to Brazil in the middle of Carnival to uncover the cause.  What they discover is that someone is using an ancient artifact to move massive chunks of earth and mine huge, underground gold deposits.  With the ground becoming increasingly unstable, our heroes find themselves in a race to retrieve the artifact before the entire city collapses!  Written by the writers of WAREHOUSE 13, this thrilling 5-issue action-adventure/mystery series promises to snag, bag and tag fans of the show and new readers alike! 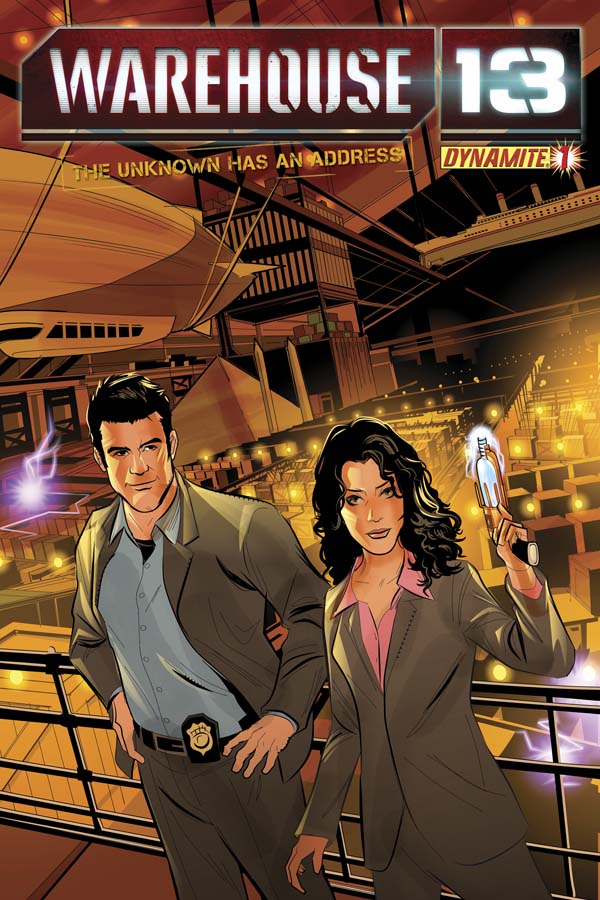 "We're all very excited to be partnered with Dynamite Entertainment in bringing WAREHOUSE 13's unique brand of endless wonder to a whole new audience.  If you love the show and you love comics, then this book is for you."
- Jack Kenny, Executive Producer/Showrunner

"I grew up collecting comic books (mostly Marvel). I always thought of myself as The Hulk (kinda big, green and dumb, with the hottest purple clam diggers the world has ever known).  When I heard I was going to become a comic book character, I realized the student had finally become the master.  And so begins the next phase in my aspiration for world domination!  Today, WAREHOUSE 13 comics. Tomorrow, WAREHOUSE 13 air-fresheners for the car!!  LONG LIVE SPECIAL AGENT PETE LATTIMER!!"
- Eddie McClintock, a.k.a. Pete Lattimer

"I grew up with a brother who collected comic books. They were always revered in our house. Now I'm in one.  Weird. "
- Joanne Kelly, a.k.a. Myka Bering

"I collected comics when I was a kid, all kinds -- spooky, funny, superheroes -- I loved them all.  Of all the things I imagined in my future -- some of which came true -- I never thought that somehow I would be a character in a comic book myself.  Awesome!  And let's talk about how cool it is to have something in your hands that is NOT a digital device!  The comic book is, well, a BOOK!  It's tangible, and can be preserved without a PhD in physics (and, if taken well care of, will probably last longer than digital images).  WAREHOUSE 13, with its fantastic artifacts and eccentric characters is a brilliant fit for the universe of comics, and I imagine it will be as thrilling, funny, weird and unpredictable a way to tell Warehouse stories as our series.  And most of all, I hope they draw me thinner."
- Saul Rubinek, a.k.a. Artie Nielsen

"I got my start as a writer in comics.  I got my start in television with WAREHOUSE 13.  Being a part of the process that brings these two things together is a fanboy's dream come true."
- Benjamin Raab, Writer/Executive Story Editor