By: Zack Zwiezen | PC News - PS4 News - Xbox One News | August 14, 2014
Ubisoft has released a new video showing 11 minutes of uncut single player action from their upcoming Assassin’s Creed Unity. The demo is narrated by Creative Director Alex Amancio and follows an assassination mission, showing off some of the new features and abilities in Assassin’s Creed Unity.

Visually the game looks amazing, both on a micro and massive level. Little details like a character's worn clothing or a building's paint being chipped are present in the demo. But there are also more massive elements like the draw distance and number of npcs in the crowd. All of this looks impressive and better than anything I’ve seen in the previous Assassin’s Creed games.
The Demo has Arno, the main character you play as, trying to assassinate a target who is inside the famous Notre Dame Cathedral. There seems to be a focus on returning the series to its more stealth and exploration roots. I'm very happy about this. I enjoyed the naval combat in AC4:Black Flag, but I’m glad to see the series returning to being more about stealth.
Freedom and open ended gameplay seem to be another focus of Assassin’s Creed Unity. Major assassinations take place in large open areas which have many entrances, side objectives and exits. Some of these side objectives actually change the area and the mission. In the demo the player was able to steal keys to gain entrance to the Cathedral. They also could kill a man that his target was supposed to meet in a confessional. By doing that the player was able to sneak into the confessional and kill his target. After that the player escaped via underground passage.
I was also happy to see that Assassin’s Creed Unity is improving the parkour and movement controls. Players now have more control over how and where they parkour. It also seems like they have added tons of new animations. I noticed Arno stumbling up a large incline. Another time I saw him twisting different directions as he vaulted over railing. Thankfully they have also added a dedicated stealth button, something I have wanted in the series for a very long time. When you hit this button Arno crouches and moves quietly, making it easier to sneak in and out of cover. 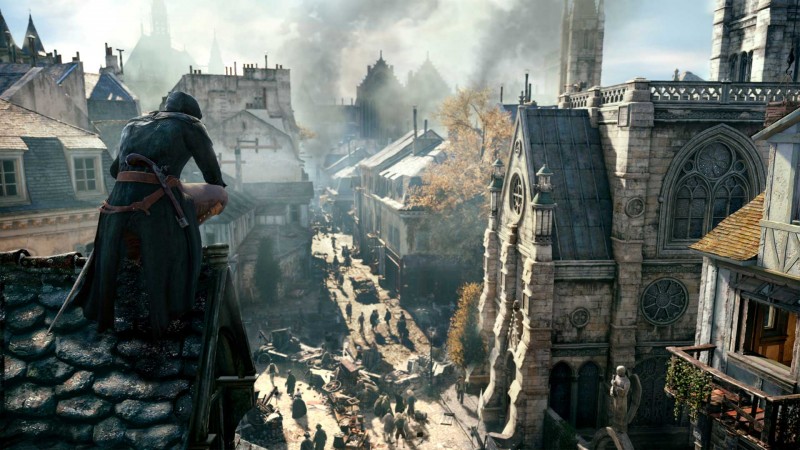 Assassin’s Creed Unity seems to be moving the series in the right direction and it looks gorgeous doing it. Paris looks massive and hugely detailed, with Creative Director Alex Amancio saying in the demo it’s the largest and most dense city they have ever done. I’m excited to see if Unity can get me back into a series I’ve started to feel has grown a bit stale.
Assassin’s Creed Unity launches on October 28th, 2014 for PS4, PS3, Xbox One, Xbox 360 and PC.