This year we’ve had non-stop sales since the week before Halloween, so there really isn’t anything special about Black Friday.  Earlier this week we covered some other Thanksgiving Sales, and many of them are still going on.  However there are a few new sales that just started today, so let’s take a look.

Gog.com has a rather pathetic sale on all three games from the Age of Wonders franchise.  While we’re happy to a three fine games going for just $12.97, it isn’t quite on the same level as the other digital distributors this week.

GamesForWindows.com has a weekly deal that has nothing to do with Black Friday or Thanksgiving.  They’re selling Dark Void at 50% off which makes it $14.99.  This is valid through next Thursday.  Unfortunately for Windows, you can get Dark Void for ten dollars over at ImpulseDriven.com

Onlive.com, who we have recently been covering has a better sale, with price breaks of up to 75% on many games (Including The Maw for $2.50).  Most of them are actually at 50% but Aliens VS Predator for ten bucks is a great offer even if it’s just 50% off.

The Electronic Arts Store is holding a sale on The Sims and Spore, giving discounts of 50% on those franchises, and their various expansion packs.  The Littlest Pet Shop is also on sale if that suits your tastes (You know who you are, and I won’t judge). 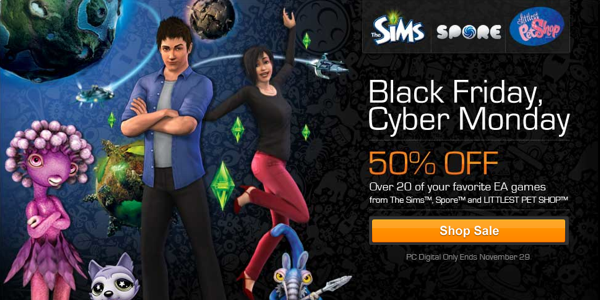 TelltaleGames.com has a doozie of a sale.  Every day for the next month, they’re having a Daily Deal.  Today’s (Friday) is 50% off anything in the store.  That includes games, books, and general non-gaming merchandise.  If you’re a fan of Sam & Max, or Monkey Island head over there today.

GamersGate.com is continuing their Thanksgiving Sale, and has added a few great choices today.  They’re selling Batman Arkham Asylum for just ten dollars and nineteen cents, and both Deus Ex games for five bucks together.

The best deal of the week is over at ImpulseDriven.com who are selling the recently-released Dragon Age Origins Ultimate Edition for half off at $24.99.  This is the edition with all the DLC and expansion packs.  Impulse is also holding a general Thanksgiving Sale, and are touting their recent price breaks on games by Bethsoft.

The sales we covered earlier this week are still going through the weekend as well: Amazon.com is doing lightening deals every few hours on games for every platform including PC.  Steam has a new “Give & Get” sale with a different selection of games every day.  Direct2Drive.com is giving away one-in-five orders for free.

Did you buy any games in one of these sales?  Tell us in the comments section below.