After a full week of massive sales, we enter the weekend before Thanksgiving.  Normally, this wouldn’t be a big deal, but all of the retailers have been trying to one-up each other to get the best sale online before everybody else.  Therefore this weekend is looking to be almost as packed with sales as Black Friday will be.  Let’s have a look at these terrific deals.

Gog.com is selling Seventeen games from Ubisoft at 50% off, if you buy them all as a bundle for $84.83 or you can get any combination of them for 30%.  Buying the whole lot is quite an investment, so if you only want to grab one or two, you should think about Beyond Good And Evil, or the original Rainbow Six.  You can get them for $6.99 each.

ImpulseDriven.com is the first online store to do an official Thanksgiving sale.  They have dozens of games on sale, including some high-profile franchises like Command & Conquer.

GamesForWindows.com has their Daily Deal on Saints Row 2 for a big 80% off.  That makes this just $5.99 today only.  They’re also doing a Weekly Deal on Bioshock 2 for just $9.99.  That’s one of the second best sale going on right now, so make sure grab this game now if you’re even the tiniest bit interested.

What’s the best deal this weekend?  Hands down it’s Direct2Drive.com with 75% off the Grand Theft Auto IV Complete Edition.  This is the original game with both DLC packs for only $9.99.  The DLC costs more than that by itself, so chow down on this deal because you can only get it today, Friday. 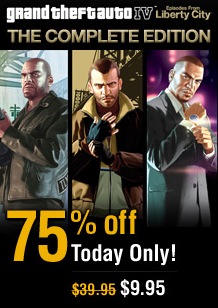