What Does DC Have Against Young Justice?

By: Sean Elks | Comic Features | August 16, 2012
Previously, I talked about how ridiculous it can be that Marvel Comics bends over backwards seeking synergy with the latest movie when movie audiences aren't even looking at monthly comics. I stand by that, but now, I'm going to make like a hypocrite and say it's kind of ridiculous that DC Comics isn't more interested in synergy with its successful television shows.

To me, movies and television shows are entirely different beasts. I've noticed that when people ask readers my age what got them into comics the most common answer is X-Men: the Animated Series. That completely isn't true for me. X-Men: TAS pushed me into reading the X-Books but not comics in general. That's semantics, though. The first comic I read regularly as a kid was the Teenage Mutant Ninja Turtles series by Archie Comics, because I loved the cartoon. Same idea.

Here's the thing. On average, you get more invested in a television show than a movie. Take the Jason Bourne movies for example. I love those movies. But I can probably count how many times I've seen each of those films. It's probably a one digit number stretched out over several years. In comparison, I cannot even guess how many hours of Supernatural I've watched, which I have been watching in new episode and rerun form for several years too.

You go to the theater, You see the movie. And maybe a year later you'll watch that movie again if you liked it. You'll wait a few years for a hopefully good sequel. That's usually it. With a television show, you spend months watching it on a weekly basis. Then you wait a few months to do it again. Rinse and repeat for however many seasons the show goes on.

I feel the sudden need to apologize to Firefly fans.

Anyway, it's hard not to get more emotionally invested in television shows than movies. There are exceptions, but it's usually the case. These characters can become regular parts of your lives for years. For a company like DC Comics, that's really something deserving of more consideration.

It wasn't until I started thinking about this article that I realized I am such a big Batman fan almost entirely because of Batman: the Animated Series. I actually didn't read any Batman comics on a regular basis growing up. I didn't read a "Death in the Family", "Knightfall" or "No Man's Land" until years after the fact. I was a Marvel kid during that time period. Yet, I loved Batman at the same time. And when I did start reading DC, you can be damn sure my pull list was full of Batman-related comics first and foremost. It still is to this day. He is a character I had grown up with and watched on television countless times after coming home from school. I was hugely invested in that character and his world before even picking up one of his comics.

Yet, DC has never really been good about exploiting this kind of thing. Say what you want about DC's luck on the big screen. When it comes to television, they own Marvel and have for many years. Don’t get me wrong. I happen to like Avengers: Earth’s MIghtiest Heroes quite a bit. But it is no Young Justice. It has the potential to be Marvel’s Justice League Unlimited, but rumored circumstances make that seem unlikely. The point is that DC seems to have a mastery over producing their products as television shows and gaining large audiences. That arguably puts them in a stronger position to pull in new readers, but I've rarely seen DC pursue that in a substantial way.

The New 52 really made the case for me about this. It's whole premise was to reach out and draw in new readers, so I figured the most logical route was to target the demographic who had or currently watched some of their popular shows.

Wow. That sure hasn't been the case. 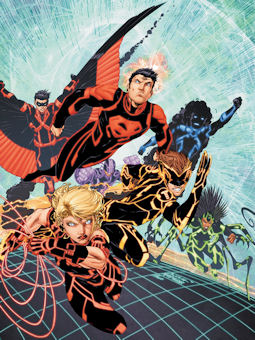 I can't even imagine how a fan of Young Justice has a prayer for getting into reading the current crop of DC Comics. The sheer failure of this is really kind of amazing to me, because Young Justice almost has the same premise as the New 52. It also set in a younger DC Universe that has been revamped to feature characters old and new alike in a sort of remix geared toward taking the best ideas and captivating modern audience. So how the hell is it that the two as so different in terms of direction and quite frankly, quality?

You’d think the logical place for a Young Justice fan to start reading comics would be Teen Titans. ...That would be a mistake. It’s a bit crazy just how incompatible Teen Titans is with Young Justice. The differences are so severe it’s almost like DC and Scott Lobdell actively want to alienate fans of the show. Did Lobdell seriously introduce Artemis, one of Young Justice’s main characters, only to quickly kill her off? My mind can’t even comprehend the thinking behind such a move. It’s more than just that, though. The premise of Young Justice embraces sidekicks and their familial connections while Teen Titans seems intent on distancing itself from such things.

So if not Teen Titans, where would someone go? Unfortunately, Superboy doesn’t do much better when it comes to resembling his animated counterpart, so fans will likely be confused or disappointed there. It’s been a year, and we have yet to see whether Aqualad exists in the New 52. Even worse, who knows what the situation is with Wally West. Miss Martian does exist but not in any meaningful way. At the same time as Young Justice is introducing Tim Drake as Robin, DC is apparently making it so Tim was never Robin. Most characters from the show don’t exist in a particularly recognizable form in the New 52. So they can go read... Nightwing and Blue Beetle?

Oh, that’s some great synergy there.

While this is a little extra frustrating in the context of the New 52, it’s really nothing new for DC Comics. Not too long ago, Justice League Unlimited was the big show around that people were growing up with. It’s the new show people now say got them into comics. 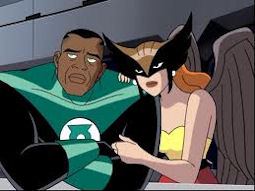 Among the many characters featured in Justice League Unlimited, two stood out. John Stewart and Hawkgirl. Bruce Timm and company made the choice to feature them prominently over their alternatives, and it turned out to be a popular choice. Remember the outrage over a white guy being cast as Green Lantern in the movie? There’s a whole audience out there who know and like these characters.

Yet, John Stewart remains the most underused of the human Green Lanterns. In fact, he got pushed even further from the spotlight. He went from being the #2 Green Lantern behind Kyle Rayner to #4 when DC brought back Hal Jordan and Guy Gardner to the fold. Coming up, he’ll probably be bumped down to #5 with the arrival of Baz.

Hawkgirl hasn’t performed much better in comics. Despite having no particular fanbase of his own, Hawkman continually gets the lead role over her. The New 52 didn’t give us the Savage Hawkwoman, did it?

Look. I’m not proposing that DC charge full steam toward synergy with Young Justice and its past successful shows. But it’s ridiculous how DC almost seems to actively avoid it.  Why? There is a whole audience out there who enjoys DC characters. Is throwing them a few bones so difficult? Aren’t they the ones most likely to become new readers? DC has more fans out there, but those fans aren't being provided with any place to come in.

Why would someone who grew up watching John Stewart want to read about Hal Jordan? Given the movie’s flop and the animated series only going for one season so far, John is still arguably the most well known and liked Green Lantern with mainstream audiences. Between Justice League Unlimited and Young Justice, Wally West is miles ahead of Barry Allen when it comes to the Flash, but you can’t even find Wally in any form. Fans of Beast Boy from both Teen Titans and Young Justice can’t even recognize him. He’s red now! ...And they freaking killed off Artemis!

DC doesn’t need to bend over backwards like Marvel does trying to match up with its movies. But when Scott Lobdell says he avoids watching Young Justice so it doesn’t influence his work on Teen Titans and Superboy, where’s his editor to point out that maybe it should influence him just a little? Correct me if I’m wrong, but isn’t the audience of Young Justice ideally the same audience for Teen Titans? It wouldn’t hurt DC to consider these things here and there.