What MMO Shooters Can Learn From Planetside 2

Some of you may have never heard of the little gem that is the game PlanetSide. It is a MMOFPS published by Sony Online Entertainment and was released on May 20, 2003 and gained a great reputation in the early 2000’s due to it being the first game of its kind by having thousands of players in a variety of massive landscapes, from the war on foot to the air, across desert, mountains, forests and swamps all playing with one another on a single server with all players across the world. Well, the highly awaited sequel Planetside 2 was released as free to play on November the 20th for PC among a frenzy of hype. Even though the game was hardly advertised I know many of my friends who were yearning for the release of this title and having played the beta I can see why. Today we will look at what other MMOFPS games can learn from such a benchmark first person shooter.

Over the past month we have had some awesome first person shooters released with Halo 4 and Call of Duty for example topping the gaming charts weekly. These have had several updates and expansions along the way with Call of Duty having 9 different titles released since the original Call Of Duty release whereas Planetside 2 has been hanging on the promise of a second release for many years and now have the privilege of playing it. This in some ways may not bring in the money as seen with COD where a new title is released nearly every Christmas, but keeps the hardcore fans and followers waiting on something they know has taken years of fine tuning and effort to develop thus leading to the belief they will get a better game. After being announced on July 7, 2011 many have been waiting for this release intently and I think that leaving a bigger gap between releases really benefits the company and the fans of the series as they have something much bigger to look forward to and a greater sense of suspense than a game that just gets recycled annually.

The mechanics, gameplay, and graphics in Planetside 2 will feel very familiar to most FPS players, It feels like a cross between the Halo and Crysis series and another game of which it can be very closely compared to is Tribes: Ascend, which is also a free to play MMOFPS from the Tribes series of games. The format is practically the same from a multiplayer aspect but Tribes: Ascend does boast some different multiplayer options like capture the flag, team deathmatch, arena and rabbit mode where as Planetside 2 is just full on team deathmatch chaos. One thing that stands out the most about Planetside 2 when compared to other titles like Tribes: Ascend is the huge landscape that you get to play on. Territories are then split into sectors which can be captured by the various empires, It has also been noted that later on SOE may introduce multiple worlds to fight on. Some sectors are captured by soldiers, while others can be captured by vehicles. Influence from captured sectors can also spread to adjacent sectors. Each sector has resources, such as Auraxium, which are used to purchase vehicles and certain weapons and upgrades. These areas are absolutely huge. The maps you will find on games such as COD, Crysis, Battlefield and Halo are just a pin prick in comparison with the maps in Planetside 2. For example Battlefield 3’s Caspian Border which is 2.21sqkm in size which equals Just one of Planetside 2‘s continents. Then if you look at the vast world of Skyrim even that is only 41sqkm. The actual size of Planetside 2 is 64sqkm. Wow! The only word I can think of is astronomical! This is what separates the Planetside 2 from the other MMOFPS games and if this structure implemented to other titles it could really make them more diverse, intense, and scaled so that the game is more thorough.

There is nothing more epic and satisfying than playing on a server that has up to 2000 people also in battle at any one time. The gameplay is at times frantic and exciting and I just don’t think this is feasible from any other first person shooter game on the market. I don’t think a single server could handle that kind of traffic on a console. It would have to be a PC title. Imagine COD having 2000 people playing at one time in one place? Even though the fights would be intense, the experiences will be plentiful and the opportunity to meet new people would be vast, It would be manic and the ping would be devastating! One way I could see this being implemented in console gaming would be the option to choose, as you would, the single map you would want to play on from the normal selection of maps on that game, or, have the option of a large map that could either combine all the smaller maps, or be a completely separate map from the selection but on a much larger scale. I mean If you think Skyrim can handle 41 sqkm then it should be possible to bring these larger maps onto a console. Then think of MMORPG’s such as World of Warcraft and Guild Wars 2 then the game will feel familiar in size but whether the game would lag would have to be something that would have to be extremely stress tested and from my experience playing Planetside 2, SOE have got it spot on. No lag and a great frame rate on my machine so far.

One thing I feel that other MMOFPS games have over Planetside 2 is a better back story and very little is explained. For the first couple of hours you’ll find yourself fumbling around the menus and figuring out exactly what you need to be doing. I started by messing with the graphics settings (which look gorgeous, definitely equal to that of Battlefield 3) but found the menus quite hard to navigate around. This doesn’t seem to be the case in other FPS games for example with COD the menus system is really easy to process and find out where you want to be. Also looking into the back story behind Planetside 2 was done by a google search rather than through the gameplay which you would find is explained in other FPS titles. I even went to look for the story of the original Planetside title and found there wasn’t even a back story. This seems kind of lackluster compared with other games and SOE could actually use the examples set by other FPS games. This though is not the intention of Planetside 2. The point of this game seems to is that it provides a huge game that offers some awesome multiplayer experiences and show off what can be done when you have such a large canvas to work with. Other games could take this grand multiplayer style and if implemented right could really make a ground breaking title. 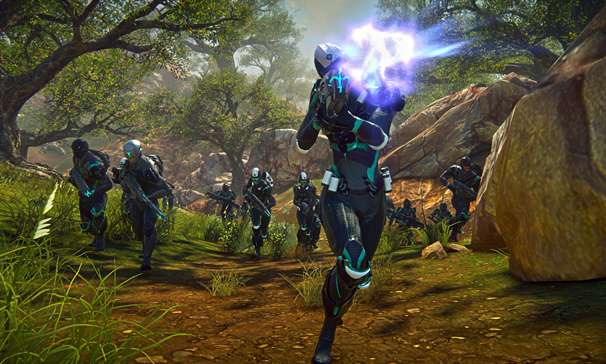 If we look at Planetside 2 then you can see the things that can be used to influence other games. The usual titles we see churned out on a yearly basis could take these ideals and make an ultimate FPS game. Games like MMORPG title The Secret World show that you can have thousands of players playing on a large world, not dissimilar from our own. Imagine if the next battlefield game was fought over a whole continent or country, Say Europe or Russia, Basing these areas on real life could also make the game feel more real and authentic. The toes have been dipped in the water by titles such as Call of Duty: Modern Warfare 3 where it featured real places from our world but with time to develop then a game could be created that combined all the great elements found in multiple FPS games. One game that you could say is comparable is the upcoming release from CCP games named Dust 514, which is based on the Eve online world. It hasn’t got an official release date yet but will be released by the end of the year according to wikipedia and will be available on Playstation 3 and PS Vita. Little is still known about the game apart from screenshots and the trailer that was released at E3 in 2011 but this seems to be the only game that come close to Planetside 2. We will have to wait and see if Dust 514 can come close to matching up to Planetside 2 in the coming months.