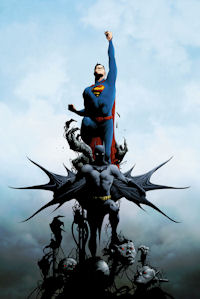 The biggest news coming out of DC Comics’ solications for June 2013 is this: Nothing is getting cancelled! It might be a little sad that this is actual news, but the past two batches of solicitations contained waves of final issues.

Instead, June brings in four new books, and it’s pretty easy to see that DC isn’t feeling very adventurous after so many cancellations. We have another title starring Superman in Superman Unchained by Scott Snyder and Jim Lee. Why isn’t it called Man of Steel? Who knows. Maybe it’s supposed to sound like Superman is starring in a harlequin romance novel. Then, there’s a series starring both Superman and Batman in Batman/Superman from Greg Pak and Jae Lee. The Green Lantern franchise grows by one with Larfleeze from Keith Giffen and Scott Kolins, which make be the only new book at all risky given this is also the first month without Geoff Johns leading the way. And finally, there’s Trinity of Sin: Pandora to start the push toward DC’s next major event. Also worth noting? The additions of these new books only brings the count up to 50 and not 52.

The next major Batman arc is revealed as Zero Year by Scott Snyder. Didn’t we just have a Zero Month awhile back with several of those issues directly dealing with Batman? Yes, we did. But DC has a long way to go toward making any sense of Batman’s New 52 continuity, if that is even possible. June is also a big month for Barbara Gordon as she appears in four titles: Batgirl, Birds of Prey, Talon and the momentarily titled Batman and Batgirl. Am I the only one reminded of Junior from Secret Six with the new Ventriloquist? Because that is one creepy woman. Harper Row makes herself seem even more likely to be the next Robin as she appears in Detective Comics, a Batman title not written by Scott Snyder. You know -- if Tim Drake isn’t going to get his role as Batman’s sidekick back, they may as well just kill him off too. I’m sorry, but it’s true. 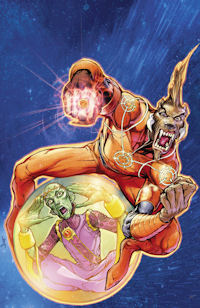 It’s the beginning of a new era for the Green Lantern franchise as the new creative teams kick off their runs. This looks like it will be spearheaded by Hal Jordan taking over as leader of the Green Lantern Corps. ...I can only assume that no other person in the universe applied for that job. Besides that, it looks like we have Guy Gardner going red and Kyle Rayner staying white. Simon Baz seems to be sticking with Johns over in Justice League of America. And John Stewart? No mention whatsoever. This would be worrying for the character’s fate in the Wrath of the First Lantern. But let’s be real. Ignoring John Stewart is just the norm.

Earth 2 introduces another reimagined character. This time it’s Captain Steel. Captain? I guess James Robinson be even more on the nose about the Captain America similarities. And it looks like the return of Power Girl’s pre-New 52 costume is going to stick. Yay for boobies.

Jonah Hex visits the present, lending credibility to the theory that a certain golden time traveler will be appearing in All-Star Western soon. Both Batman and Animal Man are still mourning their dead sons. J.M. Dematteis fully takes over the writing chores for Phantom Stranger’s struggling series, which is being retitled Trinity of Sin: Phantom Stranger to hopefully make it... less struggling. Aquaman namedrops Tula again, but the name I want to see soon is Kaldur’ahm. Still waiting, DC.

We go back to Zero Year for Batman. Scott Snyder and Jim Lee’s awkwardly titled Superman series finally arrives. Greg Pak comes to DC Comics. The Green Lantern franchise gets one title larger as it tries to carry on without Geoff Johns. And nothing gets cancelled! That’s what you can expect from DC Comics in June.